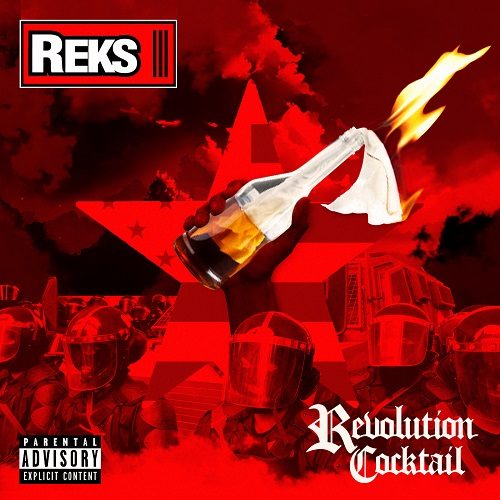 After storming the underground with the brilliant “Grey Hairs” and gaining the stamp of approval from legendary producers such as Large Professor and DJ Premier, Reks went on to make an excellent sophomore in “Rhythmatic Eternal King Supreme” (it was actually his fifth album, but his second that was widely released). It was mature as well as including some pleasant deviations from the more traditional style that was heavily associated with Reks at the time.

Since then, Reks has clearly been playing his Public Enemy collection more than usual, with much of his recent work containing political undertones as well as a minimalist, rapid-fire sound. “Rebelutionary” remained authentic, including the scathing single “Unlearn” yet I found the Statik Selektah collaboration “Straight No Chaser” a bit well, boring. Thankfully, “Revolution Cocktail” is one of, if not the best record from Reks’ rapidly increasing discography.

Continuing the revolutionary theme of “Rebelutionary”, “Revolution Cocktail” is mildly more light-hearted but sees Reks deliver his trademark style â€“ relentless raps and hard beats. Production ranges from the lo-fi, pessimistic sounds of the song “Revolution Cocktail” to more experimental pieces like “Flags”, which even sees Reks perform a hook not unlike a southern gangsta rapper. Perhaps it is ironic, given the emcee’s passionate defence of traditional hip hop, and his rhymes on “Flags” confirm that Reks isn’t happy with his country as a whole. Reks has always been angry, but there is a maturity to his delivery throughout “Revolution Cocktail” that makes this album sound like a step up from “Grey Hairs” and even “R.E.K.S”. The latter was a well-received record that I actually imported from the States at the time (damn you Amazon UK), because it felt like a balanced, complete artist combining streetwise rhymes with surprisingly friendly production. Remember “This Is Me”? Singing continues on the likes of “Ahead of My Time” and “Only Lonely” with fine results, yet Reks ensures his seventh album is jam-packed with traditional beats and rhymes.

As nice as the occasional flirtation with singers is, Reks is still best when he treats the beat like a bitch. Despite the lack of an insane DJ Premier beat such as “Say Goodnight” or “25th Hour”, the majority of “Revolution Cocktail” still possesses the charm from the Golden Era. With Drake paying homage to the Wu-Tang Clan on “Nothing Was The Same” (but ultimately overdoing it), Reks throws in some moments of nostalgia â€“ namely on “Winners & Survivors” and a track delivered in the vein of Run DMC on the song of the same name. Much like fellow boom bap believer Termanology, Reks can get tiresome when his aggressive attitude constantly bombards you with words you either don’t care about, or find going over your head. Thankfully, Reks has matured (where perhaps Termanology hasn’t) with songs like “The Molotov” showcasing a slower flow even when paired with a nippy set of kicks and snares. The album’s musical highlight is undoubtedly “Caged Bird” which marries Introspective Minds’ piano with EZDread’s soothing tones, and most importantly Reks sounds meaningful and dare I say it, poignant.

Reks is quickly becoming the next Elzhi, an emcee so talented and genuine that even his most accessible songs barely register, if at all on the wider hip hop circles. It’s a shame, a damn shame â€“ this is undoubtedly one of the year’s best rap records. Yes I said rap, because while this is a fine example of hip hop that combines traditional techniques with modern technical ability, Reks simply raps his ass off. If you can appreciate an emcee at his peak, and can forgive the odd song where Reks raps about rapping (nobody criticised Rakim for this!) â€“ you’ll discover some excellent hip hop.