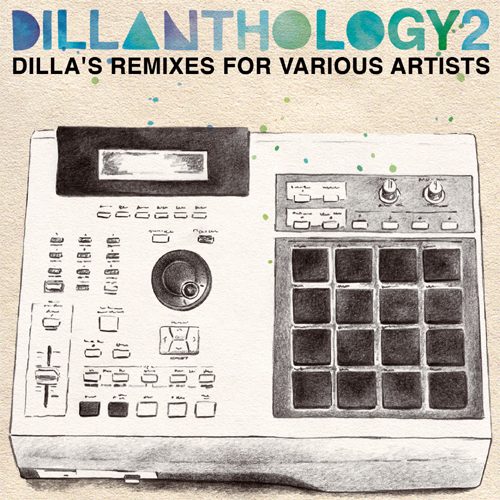 As a man known by many names including James Yancey or Jay-Dee, in the end, everyone knew him as just plain J Dilla-a mastermind and creative genius. An integral part of Slum Village and The Ummah collective, Dilla’s talents far exceed those of his cohorts in the musical production and is the sole reason for many groups’ success. Since his death, there have been countless re-releases and compilations reflecting his work, as many have felt the need to pay homage in a posthumous recognition of sorts. The second part of the “Diallanthology” series once again celebrates Dilla’s career and artistry, while highlighting more unfamiliar, rare tracks, but in the end, only scratches the surface of his greatness.

Dilla’s original production of De La Soul’s “Stakes is High” was indeed a classic as many say they got hooked on hip hop once they heard this track. When I’m talking about classic, I’m talking about the minimal, pre-iPod days when hip hop was kept simple, yet timeless. The simple snare, trumpets, and jazzy double bass heard in the original are replaced by a harder bass, yet the track still retains the pianist Ahmad Jamal’s sampled keys. Mos Def and Truth Enola add their own flavor to the track with their own lyricism, yet the original track is still difficult to surpass.

Masta Ace’s “Sittin’ on Chrome” does a complete 180 with Dilla’s twist as it is featured as the only “Ummah” remix. Q-Tip and Ali Shaheed Muhammed must have been behind this remix that completely changes the whole tone of the track. “Sittin’ on Chrome” was gangster if anything with its distorted bass and keys while Dilla’s remix is far from being any close to thug. While the “Ummah Remix” features high toned keys, trumpets, and light claps, it just doesn’t interconnect with Ace’s hard up lyrics. At least Dilla kept the sampled Eazy E’s “Eazy Duz It.” It would’ve been a shame if he hadn’t. It’s a similar story on Busta Rhymes’ “Woo Ha” as Dilla changes it into a more jazzy track while losing some of the ferocity and intensity of the original.

A Slum Village track had to be included in the “Dillanthology 2” and what better song to include than “Falling in Love.” The remix sounds very similar, but more of a sped up version if anything. The recognizable main beat is still retained, yet more pronounced with slightly higher levels and tones. Dilla tweaks his singing on the remix, but is very reminiscent of his crooning on the original. Call me sappy, but the slower original track just seems ideal for the “love” theme.

With his illustrious production on The Pharcyde’s unforgettable “Labcabincalifornia,” Dilla’s remix of “Y? (Be Like That)” clearly outdoes the original. The incorporation of a smoother beat with organs and light snare enhances the female vocals with the focus geared more towards the lyricism from The Pharcyde. Minus the xylophone and scratching, the “Jay Dee Remix” sounds more like a grown up version of the original.

As everyone knows, Dilla knows no boundaries with his remixes. Ultimately, his talents are displayed in the purest form as he takes tracks to new levels and heights. It was definitely exciting to see a Four Tet remix on the list because their genre of music is a complete polar opposite of classic hip hop and what better track to highlight than “As Serious as Your Life.” Four Tet’s abstract, electronic beats are converted into a jazzy, bass guitar driven track with lyrics from Guilty Simpson. It almost seems unrecognizable at first, but as soon as you hear the familiar guitar riff from the original track, you know understand the direction Dilla was headed towards. As an amazing track, Dilla works his magic and simply transcends the art of remixing.

In addition to his well known remixes, “Dillanthology 2” highlights Dilla’s more rare remixes that include Jay Dee’s remixes of Mood’s “Secret of the Sand” remix, DJ Cam’s “Love Junkie,” and Steve Spacek’s “Eve” that should definitely not be looked over.

It’s definitely reassuring to see that Dilla’s presence still lives on long after his death. However I ask myself “Why now?” As many people may agree, it seems as though Dilla is posthumously celebrated more so than his living days, but in actuality, his artistry has been more influential than many artists in the hip hop sector. Dilla didn’t get nearly enough credit when he was alive as people still strive to learn about him today. In this sense, compilations such as “Dillanthology 2” have highlighted his best work and still educate the more “green” fans on Dilla’s abilities as a producer. Although many devoted fans have previously heard most tracks on the album, “Dillanthology 2” provides a clear glimpse into Dilla’s world, but in the end, is just simply not enough to fully embrace the imagination of this hip hop prodigy. Perhaps nothing will ever commemorate his life enough, but for now, all we can do and should do is sit back and enjoy Dilla’s relentless work and commitment to the revival of hip hop.