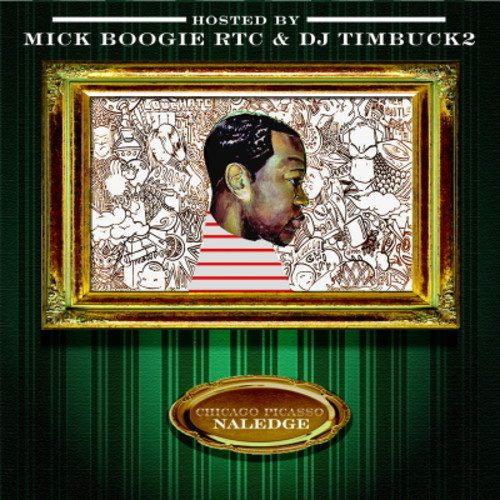 “Chicago Picasso” is a mixtape with Naledge spitting on all original material hosted by a DJ who rarely chimes in on an interlude. Basically, this is an album. Knowing that it lacked the cohesion of a good album, the motivation of a good album, and that it consisted mostly of tracks that would not make the cut of a “real” album Naledge decided to call this a mixtape. He’s saving face more than anything. On the outro he even admits that these are all tracks from the vault. This is not the sort of vault where one would store your valuables. It is the type of vault where one stores things that might be detrimental if released. Not detrimental in the scandalous way, but detrimental in the way that might disappoint your parents. There’s nothing wrong with anything that Naledge was keeping in the vault, but Naledge was not on his best behavior as an emcee either. It’s a shame too considering the “mixtape” is full of plenty of beats that could have made a dope song if treated right.

“Chicago Picasso” is chock full of banging beats with emcees who seem to have been happy delivering their B-game. “Standing on Sofas” has a simple, but hype beat. Repetitive horns, pounding bass, those alternating “southern” synths meant to mimic the triggerman beat are all present. They even threw in a screwed hook, it just happens to be a wack one. “Sitting on sofas, Spinning Like Oprah” is the message of the song with lines like “let me cut like Remington” making up the verses. The beat could have made for something much catchier. “Cool Relax” provides a change of pace with a soulful sample repeated throughout and much-hyped Jay Electronica lending a verse. Naledge even sounds re-energized on his verse, but Jay Electronica’s trash talking falls flat on this one. It’s actually quite disappointing to see so many guest rappers throwing away verses on the mixtape. The only guys that sounded like they even were trying to impress were Rhymefest and A. Pinks. Otherwise it seems that wack guest appearances were part of the reason these tracks were left on the cutting room floor. The rest of the tracks are kept down by the man himself. He wastes some bangers with lazy and played out concepts. “Star Struck” has a dope beat and Naledge takes the track in the right direction with a song focused on relationships, but ultimately a lazy hook and nondescript verses waste the potential. A Bun B appearance is even wasted on another played out concept. “Look at Them Hips (Remix)” almost works with an R&B beat juxtaposed over strip club drums, but the grunting in the background is over the top and makes the beat a mockery of the southern club music it attempts to emulate.

“Chicago Picasso” isn’t bad, but it isn’t great either. It sits comfortably in the middle. Some dope beats. Some dope rhymes here and there. An occasional dope song. Most of it ends up being rather average and forgettable. Naledge misses the point of a mixtape/street album/b-sides collection. His fans wanted more music and that is what he delivered, but implicit in that request was that he reach his maximum potential in said music. This collection does not deliver that. I don’t come away thinking Naledge is wack, but I don’t come away thinking he’s the hungry, vicious emcee who will absolutely rip a proper album. It’s not bad, don’t get me wrong. If you’re a die hard Naledge fan you will probably dig this as a nice hold over until you get your fix. Ultimately, the point should have been for Naledge to make some that showed an emcee ready to rip the game. This type of release is best suited for an emcee already established in the game. Naledge is still trying to show and prove and “Chicago Picasso” just shows flashes of brilliance, but proves nothing.