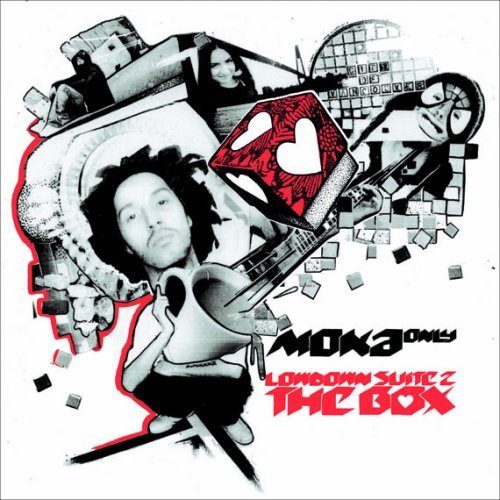 Moka Only :: Lowdown Suite 2… The Box

The act of waking up can be anything between brutally blunt and a slow transition from asleep to awake. The gradual awakening can leave you in a dazed condition where it is hard to distinguish between dream and reality, or it can put you in a state of heightened awareness where whatever is on your mind presents itself sharply and clearly. Some of my best reviews would begin at this latter point if my presence of mind would extend to turning on the light, grabbing pen and paper and writing down my thoughts. Your average rapper will probably neither take the time to do so. Some will try to tap into their creative side with the help of drugs, others will want to let the facts speak for themselves, others rely on where the rhyme takes them, and some of the best are so lyrically lucid that they almost always find the right words.

But there are also rappers that offer precious insight amidst clouded thoughts, jumping from pointless to poignant within seconds, alternating between conscious and unconscious without apparent impulse. Moka Only’s latest opus, “Lowdown Suite 2… The Box,” finds him again talking to himself, or talking in his sleep, or sleepwalking safely through his own universe, basically any position opposite the traditional, alert and attention-demanding master of ceremony. Only he knows why the title of this particular album references his 2003 longplayer for Swollen Members’ Battle Axe label, “Lowdown Suite,” as why it ended up being released by Swiss label Feelin’ Music.

Feelin’ Music’s Chief provides the delicately pulsating beat to the very first track, and while Moka observes that he gets “relief on the beat duty,” he’s back to shouldering all artistic responsibilities right after the track’s abrupt ending. As usual Moka the producer unearths more than a handful of nuggets which he shines up with a beat miner’s expertise and dedication. His organic drums have a ’90s quality, supporting sometimes melancholic, sometimes upbeat melodies, resulting in spheric yet grounded compositions. Technically, the album hits a high point with “Clap Yer Feet” and “Trudgin,” one a constantly changing beat carousel, the other a somber instrumental with chopped pianos, horns and Ice Cube vocals. Emotionally, the sublime “Do Work,” the playful “Lemon,” the layered “Mothballs,” the assured “Be Alright” and the Slum Village study “Isn’t Over” are among the most engaging tracks.

Lyrically, “Lowdown Suite 2” revolves – where definable – mainly around Moka’s nomadic and seemingly neverending career. “Do Work”‘s centerpiece is its hook “I’m always pushin’ and I’m shovin’ and I’m pullin’ tryin’ to get it to work / No matter how difficult shit can get I figure that I gotta do work.” Doubts creep in soon enough, especially economic concerns (“A have-not lookin’ at the door / What I’m in this for?”), but overall Moka Only seems to be content with where he’s at. “Now I’m gettin’ backpack shine / no crime, this is how I do it, it’s fine,” he rhymes on “Syrup.” On “Lemon” he describes his music as having “enough honesty, just enough nasty / just the right quality to fuck shit up – that’s me / I’m serious with it, and if you’re seriously committed to it / then there shouldn’t be a limit, is it?” And despite pessimistic sentiments like “My parents probably bitin’ fingernails now / not like they ever saw me as a cash cow…,” he concludes in the closing “Rock the Yacht”: “I’m somewhere in between the rich and poor / so in reality, what I’d be bitchin’ for? / I’m not – good is how I got it / I got wads in the wallet.”

That’s why we can expect more albums like this from Moka Only, unorganized, patchy, dreamy – but nevertheless determined. But while the structure of his music is unconventional, it’s never purely abstract or too far away from the historic pillars of the genre. Like Madlib or Jay Dee, Moka Only has always one foot firmly planted in hip-hop, whether he’s dropping sly BDP references (“Everybody seen me on that album cover / (What you looked like?) Some bizarre kinda lover”) or bragging, “No matter what, I’m on a roll / and in my mind I think I’m on the honor roll.” He may not deliver what he calls “customized rap shit,” but it’s rap shit nonetheless.

Somewhere Moka has his ultimate b-boy document in him, but at this point he refuses to go look for it. For better or for worse, each one of his numerous ventures is Moka only. Even when he invites guests (Pharcyder Bootie Brown, Sweden’s Kissy Asplund), the only tangible interaction happens between Moka’s voice and his beats, both of which, it has to be noted, don’t always possess the strongest of motivations. And so you end up with three quarters of an hour of unfinished but not uninviting tracks from a self-absorbed but charming fella.

So far, the internet has called the album a ‘sonically intact audible delight’ and ‘one of the best and most complete albums in this first half of 2009.’ Granted, “Lowdown Suite 2” is cohesive, but it remains a hip-hop miniature, unable to size up to standard works by MF DOOM, Kool Keith or even De La Soul back in the day. It’s become a common complaint to demand less quantity and more quality from hip-hop, and while Moka Only is far from your average, he doesn’t exempt himself from the rule, at least not with his latest.

Still, like previous albums “…The Box” makes it clear that Moka Only is not only a dreamer hoping to find a sustainable living outside of industrialized rap music, but a doer who tries to find ways to realize his dreams. “It ain’t gotta make sense to make impact,” he raps, forsaking the sharp focus in favor of a vision that becomes clearer the more records he puts out. It’s not going to be a sudden impact that you have to brace for, but when you observe Moka Only do his thing and pursue his dream, you will definitely not be surprised should he end up having an impact on you – or even hip-hop.