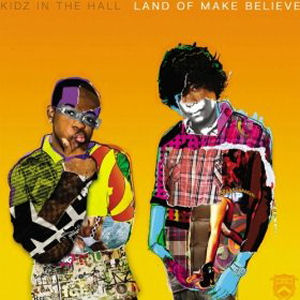 Kidz in the Hall :: Land of Make Believe

Kidz in the Hall came in Hip Hop in the post Kanye West era. It was now acceptable to be a hipster rapper. They arrived with a slew of other of their kind. Yet, for some reason, they always stood out to me. Maybe in was the fact that they were the old school combination of a rapper and his DJ. Perhaps it was their early affiliation with legendary underground record label Rawkus, or their later one with the usually grimy/gangsta Duck Down crew. Whatever it was, I was more aware of their existence then that of their peers.

The group’s most recent album “Land of Make Believe” was released on March 2010. When I saw the cover art, I knew instantly I had a unique product in my hands. All of the songs share a distinctive core sound due to Double-Os production. His company is called “Space.Aged.Gorilla.Funk” and this name describes his style perfectly. On Kidz in the Hall’s latest, he creates a bundle of funky up tempo songs with spacy synths and quirky rhythms.

While I have mostly praise for Double-O’s distinctive approach and consistence, his production is what keeps this LP from being a home run. The beats seem predominately made with soft synths and few elements in the music sound “real”. As a result, most of the songs feel a little cold and digital. Also, there is little catchiness to be found on “Land of Make Believe”. Not many melodies will stay in your head when you’re through listening to the album.

That’s not to say that there are no hits on “Land of Make Believe”. The songs “L O V E”, “Will II Win” with Marsha Ambrosius and “Take Over the World” with frequent collaborator Just Blaze are exactly what the rest of the LP should sound like. On these excellent instrumentals, Naledge gets to shine in all of his excellence and the result is simply flawless:

“And dreams like women if you only sleep with em
Nothin ever comes from em, but I bet you still love em
But love ain’t buzzin
Listen to these wise words spoken by my cousin
What you’re about to do is so historic
They can’t deny the win if you keep scorin
Whatever is in your heart don’t ignore it
And if you doubt yourself, sing this chorus”

Being from Chicago, Naledge is a worthy follower of Common and Kanye. Those are big shoes to fill, but with this album the young rapper made me a believer. He is witty, original, charismatic and lyrical. He sounds like a younger, more energetic Kanye West. He demonstrates clearly that as a rapper, you can portray something realistic and still make it seem cool.

In summary, I highly recommend Kidz in the Hall’s new album “Land of Make Believe”. It’s an excellent original product from young inspired artists. If you are looking for underground musicians who are about to explode, look no further than these two.