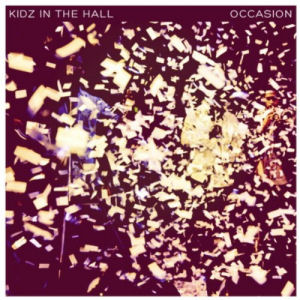 Kidz in the Hall :: Occasion

Kidz in the Hall found an audience by boasting a hipster appeal of sorts – they’re Ivy League grads and won’t let you forget it, sport old school awareness with a more youthful sensibility, and entered most listeners’ consciousness under the Rawkus banner. Now signed to Duck Down, the duo’s fourth LP “Occasion” is being promoted in conjunction with an MTV2 project which followed Naledge and Double-O as they recorded the album in a studio overloaded with product placement. Between recording sessions they threw a bunch of parties at their house, also documented on tape, which ostensibly contributed to the celebratory vibe of “Occasion.”

“Occasion” is certain to alienate the audience who helped Kidz in the Hall reach their initial success. Fourteen tracks deep of mindless party jams, it sounds like the result of a forced reorientation in which they had to listen to Young Money records for a few months. At his best, Naledge sounds like a lesser version of fellow Chicagoan Lupe Fiasco, but on “Occasion” he’s in danger of losing the rights to his stage name – he could hardly be said to be droppin’ knowledge here. Check him on “Player of the Century,” a Freddie Gibbs collabo with a beat that sounds like a mistake left on DJ Paul and Juicy J’s cutting room floor:

“See I done came down on Cottage Grove, all tipped and stony
Sippin’ that Remy, bumpin’ that Nore
Head in the whip, track number six
Girl, suck and spit… ain’t that a bitch?
Ain’t I lookin’ good, Polo to the socks
Cartiers, wood, windows down, now I’m drivin’ slow
Creepin’ through the hood, flickin’ like a playa should
Steady hate a nigga lookin’ like a nigga would
Camera phones, they snappin’ pics
Nugget meal from JJ Fish
To the car wash, car lookin’ span and spic
Said I’m broke, nigga, but I’m finna be rich”

If there were just one track with the lyrical doo-doo I just transcribed, fans could easily write it off as being ironic. Problem is, the entire album contains verses of partyin’, flossin’, and clubbin’ that sound like they were written by a third grader under the influence. “Won’t Remember Tonight” finds Naledge a bit more upbeat but hardly any more articulate:

“Bless the bottle and pass the drink to me
That Remy Grand Cru, that’s what we drink, homey
A couple Red Bulls, never shootin’ blanks, homey
The way she windin’ make me wonder if it stank, homey
A freaky boy, don’t bring him to daddy
Take his BBM and get a room right off Pulaski
Kitty kitty K-O just like Mayweather, ta-ha-ha
Baby just believe in me ’cause anything could happen
Brain is on the prowl, go’n, go’n wipe me down
Love the peaches, love the peaches when I’m sippin’ on the brown
When the peaches get the cream then I say I can go to town
I’m so suave I get wet but don’t never drown
Do it like that, go’n do it like that
I’m headed to the bar, I’ll be right back
Double Remy with the cola, just a light splash
That should keep ’em shakin’, baby, I’ma need a nightcap”

If an entire record of Naledge rapping like a poor man’s Drake, shitty punchlines, rhyme cadence, nasal voice and all, isn’t enough, he’s far from the only culprit here. Double-O is aiming straight for the top forty with these productions, almost each of which incorporate abrasive, distorted club synths, a danceable bassline, and nauseating autotune. “Walk on Air” sounds like it was made for B.o.B., and Naledge responds with an embarrassing imitation of Bobby Ray. “Occasion,” in turn, sounds like a Jay Sean b-side, but the undisputable low point is “Crash Dummy,” the obligatory “A Milli” knockoff featuring such Pulitzer-worthy gems from Naledge as “I’ve got it runnin’ like a track meet” and “I can’t be fucked with, call me abstinence.”

“Occasion” is an abomination by all standards, but that it comes from such a respected entity as Kidz in the Hall makes it even more inexcusable. Over just fourteen tracks they manage shameless imitations of every top forty rapper from Lil Wayne to Wale to Big Sean yet fail to evidence so much as a shred of originality, and I legitimately struggle to find a single redeeming quality in it. Part of me wants to think Naledge and Double-O are being ironic by making this album, but that doesn’t make it any easier to stomach. The Boot Camp faithful over at Duck Down need their heads checked for putting out this insult of an LP – I can’t imagine Evil Dee or Sean Price ever getting behind a record where Naledge shouts out the various corporate sponsors of his MTV2 campaign. A complete, utter, and perplexing stinker from Kidz in the Hall.