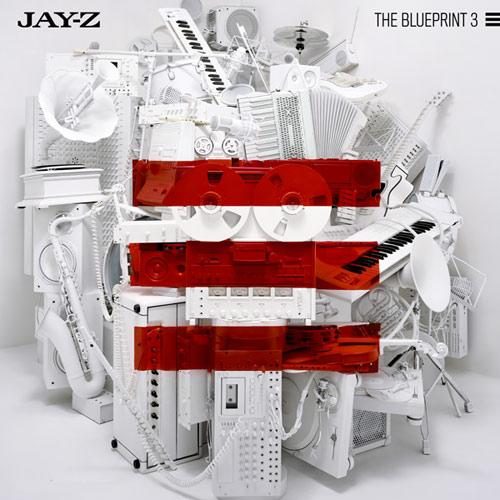 Jay-Z will turn 40 in a couple of months. It’s interesting, because in hip hop that age is unfairly regarded as the dawn of senility, not wisdom – and the genre is probably the most ageist one around. Live fast, die young, relate to the youth, fuck the old guard. Yet the rap game is in an interesting transitional phase – the old guard are still retaining much of their fan base, whilst dropping impressive efforts every now and then that make young critics swoon at how they are “rolling back the years.” Then, you have relative youngsters like Drake, Kid Cudi and co that are being declared legends by kids who just don’t know any better: they have yet, at this very point, to even release albums, so relax and let them progress a while. And here we go with another Jigga effort, his seventh proper one this decade and, for some bizarre reason, the last in the apparent “Blueprint Trilogy.” Make no mistake, though, this one has practically nothing to do with the original.

Since “The Blueprint 3” leaked just over a week ago, everyone has been rushing to post their own online reviews and the reviews have been incredibly mixed, perhaps forcing Camp Carter to bump up the release date to the regular Tuesday, as opposed to Friday 9/11. The diehard fan base has generally been pleased, declaring it another classic – the rest of the world thinks it a Roc Nation abomination. A select few are firmly hedging their bets – allowing themselves to actually LISTEN to the album more than once on their shitty laptop speakers. After all, this is a huge release from an industry giant. The last time that Eminem and Jay-Z released full-length solo LP’s in the same year? 2002 – “The Eminem Show” and “The Blueprint 2”. The significance of this? They are the top 2 selling rappers this decade, even though they both took extended breaks. In other words, Em and Jigga can take 8 years off between them and still be the two biggest rappers in the world (other MC’s need to step their game up next decade).

Much has been made of Jay’s flirtation with the indie-rock-hipster scene. Don’t believe the hype: it is barely noticeable, as he doesn’t really commit to ANY style, preferring instead to genre-hop between hip hop, R&B and sample-driven dance. Expect Swizz Beatz imitating the Neptunes ’01, Timbaland imitating Timbaland circa ’03/’06, Kanye imitating everyone EXCEPT Kanye West ’01… One of the shocks to the system is the middling beats that have snuck in. After initial listens, my friend and I simultaneously emailed one another that it sounded like a Nas album except without the stunning lyrics to save it. In the past, you could always rely on Jay-Z to have that ear for music – and the better his taste in music, the better his lyrical content tended to be. It is musically ambitious opus, but whilst the Neptunes may have fallen off from making smash hits, they have quietly been crafting beautiful album closers for a few years now – and they succeed with “So Ambitious,” whereas Kanye flails helplessly with musical clangers like “A Star Is Born” and “Already Home” (surely sponsored by Garageband Loops). Timbaland’s efforts are the most play-it-safe beats that he has cooked up for years: “Off That” is a poor relation to the Justin/Furtado takeover of 2006; “Venus Vs. Mars” sounds undercooked and out of place; “Reminder” isn’t as awful as first thought, but still far from his best.

It must be said that the top-heavy first third is virtually unimpeachable – whilst not all-time classic Jigga, it is still very successful and will worm its way into your psyche without warning. Whilst GM-modified hits such as “Run This Town” are a touch cold, clinical even, in their creation, the first five tracks work well, culminating in the spine-tingling “Empire State of Mind.” If I hadn’t been travelling around New York at the time, it may well have had a Google Maps feel to it – but it is a stunning and certified banger of a homage to the Big Apple. But after that, the rest of BP3 becomes disparate, random even – and not just the music.

“Kingdom Come” was a pretty colossal failure, saved only by a strong first week – and lyrically he droned on about brands so exclusive, normal people couldn’t relate in any form. “American Gangster” was a certified classic, yet it didn’t sell anything like his usual numbers due to a lack of big singles. So, Carter finds himself in a quandary. His last album with good music, lyrics and big singles? “The Black Album” which dropped SIX years ago. Therefore, the emerging teen fan base genuinely was too young to actually register him and his previous successes – so you can understand why he would hire in young guns like Drake and Kid Cudi for hook duties (let us be honest, they are rookies as yet unfit to tie his laces). You can see why he would create a melodic lead single featuring his protÃ©gÃ©s Rihanna and Kanye West (who virtually Eminem’s Jay on his own shit) – it zoomed to Number One in the UK singles chart on Sunday, and it has real star power combined with a catchy hook. That’s the point though – Jigga is now reliant on others for the first time in a long while. He is the same age as Rihanna and Soulja Boy put together – and he no longer has his ear to the streets, resulting in a somewhat inadvisable crusade against AutoTune. Is it coincidence that T-Pain just released an iPhone App allowing users to sing all AT’ed out? Plus it is in the Top 10 Download charts around the world? Jay, on the other hand, raps about carrying a “pager” – I don’t know why his advisors ain’t forewarned him.

Thus we end up with an overly defensive Jay-Z claiming he is above all the usual bullshit, but continually has to remind the listener of his successes and the trends that he helped set. Fair enough, but it makes for a pretty dull listen, especially when most of the album ends up being moderately clever but really rather vacuous. On more than one occasion, he just repeats himself like a Brando in “On the Waterfront” and you almost feel sorry for him (listen to “Already Home”). Then you remember that BP3 isn’t supposed to be a classic. No, it is DESIGNED to get him back in the game, and it WILL sell a lot of records around the world, trust me.

“The Blueprint 3” should comfortably outsell Raekwon’s “Only Built 4 Cuban Linx… Pt II” by 5 to 1 this week. That obviously doesn’t mean that it deserves to. Rae’s album isn’t perfect, but it is 5 times better executed than this, honestly. If Jigga wanted to experiment whilst re-establishing his legacy, he should have looked to Mos Def’s album, “The Ecstatic.” Sure, I was harsh on it, but there were still 8 or 9 tracks that were excellent, including the 100% perfect “Auditorium” featuring Slick Rick, whose verse alone is better than absolutely anything on BP3. Jay-Z is trying to come across as brand new, but he only succeeds in looking like an old brand in need of a revamp. Sure, he went to a Grizzly Bear concert, but I don’t give a “fidduck” (anyone with an ounce of ’09 taste would choose Animal Collective’s legendary release over an alright one with three great tracks). The end result of all this confusion and non-committal behaviour is more like “Kingdom Come 2” – Jay-Z is so fixated on achievement that he is losing track of why he wanted to MAKE records in the first place, not just BREAK them. How has it come to this? The start of a new decade needs to bring the winds of change with it. Now is the time to stop the old guard’s continual stranglehold of power and let the new wave of energy become legends in their own right. Hip hop needs us now more than ever.