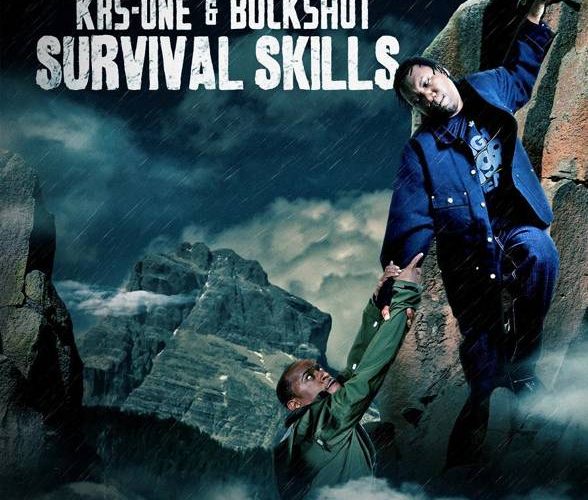 KRS: “My feet stay planted on the ground
You want that soft pop shit, you better book another sound
We gets down, I know the streets
Y’all rappers got maps out, lookin all around
Huh! Y’all want the crown, but why should I battle you
if next week they’re gonna put you in the ground?
That’s a waste of time; I’d rather blaze a rhyme
on someone tryin to raise they mind
Bucktown, USA – Boogie Down connect
Yo Buck, what the fuck they gon’ say?”

Buckshot: “Who cares!
They want that pop shit, that soft hip-hop shit
That KRS and Buck +not+ shit”

Buckshot and KRS-One are the latest in a long series of 2009 dynamic duos to drop an album together. To be perfectly fair they were one of the first to announce their collabo’ and leaked out the single “Robot” to radio and mixtape DJ’s well before most of the other all-star team albums came out. Whether music industry politricks or the relentless perfectionism of the two artists on “Survival Skills” are to blame for the delays is up for debate, but as the critic reviewing this album I choose the latter. The two artists involved are known more for their longevity in rap than for being in a hurry to do shit. Two albums in one year, or one album in four years, it doesn’t matter. Whenever they drop a project, it’s worth the wait to their fans, and “Robot” was the kind of song that told you “Survival Skills” wouldn’t be a disappointment. KRS-One and Buck dropped a stinging critique of today’s lack of creativity over a Havoc beat:

Buckshot: “Seems like you can’t sing or rap these days
Without Autotune in the back these days
Well fuck that! I got somethin to say
With brown blunts, green weed and the smoker’s gray, see
the best to do it was Roger Troutman
Nah shorty, T-Pain didn’t come out then!
I was about ten, had striped Adidas
Raised from the back in the days, all types of leaders
Now, I’m like DANG, they sound the same
Buck voice is original, he off the range
Dr. J, Barry White, WHOA
Or Barry Manilow, the flow like DAG he nice
So, keep that original flow
That Bucktown, Duck Down, that shit you knows
And I don’t flip no O’s
2000-and-right-now, when I spit they know”

KRS-One: “This ain’t a diss to nobody’s art
Cause Afrika Bambaataa really gave it a start
You go back in the history of rap man
And you’ll see classic jams like Planet Rock and Pac Jam
Go online, look up Kraftwerk
Everything we doin is past work!
We already wore that hat, those pants and that shirt
So do you man if that works!!
But we really here to talk about all the copies
Cause when it comes to hip-hop, we the orthodoxy
Cats poorly copy, copy sloppy
In that section, young people should not be!”

It would be easy for two seasoned veterans like Buck & KRS to come out sounding bitter that they’ve been overshadowed by a newer, younger generation of less lyrical rappers who rely on Fruity Loops and MySpace to be a success. Instead of going that route, these two New York legends offer CONSTRUCTIVE criticism. Kris and Buck simply note that what you think you’re doing is not brand new this year, let alone innovative when it was already done 20 years ago, so instead of copying what makes everyone else hot come up with something totally original.

The same can be said of “Survival Skills.” Instead of doing the same thing either one has done before as a soloist, these two rap kingpins teamed up to worked together with a whole new slew of producers and beats – and it works. Each song opens a new chapter in their book of rhymes we’ve never read before, over a new beat from today’s generation of producers. Black Milk puts in work on “The Way I Live” featuring Mary J. Blige and “Runnin Away” featuring Immortal Technique, and that sentence alone just blows my mind – you can be excited about the beats or the guests either way but together with KRS and Buck to boot WOOOOO that’s hot. Speaking of fire collabos, Ill Mind laces up “Clean Up Crew” featuring Rock from Heltah Skeltah and “We Made It” featuring Slug from Atmosphere. In fact the deeper one goes into this album, it starts to seem like a miracle that “Robot” was chosen as the single to leak. Personally I’d have chosen the Marco Polo laced “Oh Really” featuring Talib Kweli or the heavy and choppy pianos Nottz put on “One Shot” featuring Pharoahe Monch. Got DAMN.

The best way to sum up the KRS-One & Buckshot album may be this – if you were already a fan of either of these artists at any point in your life and you DON’T buy this album, consider your hip-hop citizenship revoked. If you AREN’T a fan of either of these artists and are getting a 2009 late pass, you’ll become an instant convert. Just because you’re an old veteran of the rap game doesn’t mean you have to SOUND old. Buckshot and KRS have achieved something rather remarkable here – an album I can’t find a single fault with. There’s not a bad beat, there’s not a whack rhyme, there’s not a collaborator on a track that missed the mark, and the disc itself is neither too short nor too long – it’s 14 songs with no skits, no filler, no bullshit. I don’t care whether your neighborhood store charges $7.99 or $15.99 for this album – whatever price you pay is not only worth it but will continue to be for years to come. Welcome to a new classic.