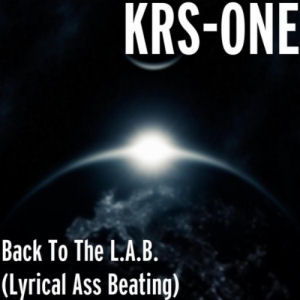 “My next piece goes out to you internet bitches
Hiding behind texts-es and shit…
First of all, y’all don’t really grab mics man
You be in the studio with the mic and the mic stand
On your knees you supposed to fall
I’m just superior, clearly I’m over y’all”

Harsh words from one of hip-hop’s most venerated statesmen – and not exactly unprecedented either. Lawrence Krisna Parker learned one of hip-hop’s most important lessons over 25 years ago, and though his philosophy has taken many (and some would argue contradictory) forms over the years, this one lesson is still taught by The T’Cha every semester: HUMILITY DOESN’T PAY THE RENT. There are many words ending in -ist you can describe KRS-One with: humanist, spiritualist, activist, antagonist, but the most apt word is egotist. It’s not a diss to say Kris is obnoxiously arrogant – it’s a compliment. His belief in self has been both sword and shield, stabbing lesser foes who attempted to take his crown while protecting him from a music industry that tried to beat the defiant rapper into submission. His fame and fortune have risen, fallen and risen again with over 20 albums, hundreds (perhaps thousands) of lyrical and media battles, and millions who have seem him rock live worldwide. His contributions to hip-hop culturally and musically put him almost beyond reproach, and he’s paid far more dues than most. In short when The T’cha speaks, I listen.

Here’s the funny thing – on “Lyrical Ass Beating” I’m listening to a man who feels disrespected, mistreated, hated and cheated. This too is not unprecedented, as KRS long ago took MC Shan’s “The Bridge” as being disrespectful to his native “South Bronx,” and went on to famously state that “every sucker emcee had a response” to his pro-SB stance. Was Shan’s song disrespecting him personally? No. Was it ignoring or rewriting large parts of New York’s hip-hop history? Arguably so. Thus the groundwork was laid for a career long tradition of Kris Parker responding to anything he saw as a slight to the culture, music and history of hip-hop – rightly earning him praise as hip-hop’s most staunch defender. For Kris this often turns around into identifying attacks on him as attacks on hip-hop as a whole, and responding with counter-attacks that can be disproportionate. Prince Be and his hippie “bliss” rap group P.M. Dawn posed little threat to Kris or hip-hop culture, but he got thrown off stage for daring to ask what it was Kris was “teaching” in his rap. Ego bruised, ego defended. Less obvious is why Kris thought that Nelly calling a song “#1” was a diss simply because Boogie Down Productions recorded “I’m Still #1” almost 15 years earlier or why he needed to unleash a verbal tirade on the pop rapper and call for a boycott of his music. Still amusing, still excessive.

For a man who is so famously self-confident, and for whom that confidence often translates into great works of art lyrically, Kris Parker’s ego does seem to get bruised quite easily. If you’re great and you know you’re great, and have proven it time and again in a career spanning four decades, why waste time handing out “Lyrical Ass Beatings” in 2010? It’s the ultimate KRS-One contradiction – artists and critics that should be as insignificant to a man of his stature as an ant is to an elephant still somehow manage to PISS HIM THE FUCK OFF. The answer is obvious though and perhaps slightly depressing – he can’t put down his sword or shield. Even after squashing his beefs with old foes like MC Shan and Marley Marl, he’s still got to find new ones to stay driven, focused and hungry. This new and unexpected EP is proof to both himself and his continually loyal audience that after all these years, he’s still got it. He’s not just a hip-hop educator, an inspiring legend, a proud community activist – he’s a WARRIOR. When paired with the right beats, his battle rap can still rattle cats, and his sword can pierce egos almost as mighty as his own. Take the DJ JS-1 blessed “Who Da Best” for example, which leaked on the internet well before this EP hit online stores:

“Welcome to the Lyrical Ass Beatin
I’m not in a mansion or a yacht, I’m right on your block man speakin
I keep teachin; cats be like ‘How he still eatin?’
Cause I build on skills that never weaken (wooo!)
I ripped the club just last weekend
Y’all sittin around playin X-Box and internet freakin
Then you want to get what I got? You want to get in my spot?
You want to click click and hold on my glock?
Nah player, get your own pistol!
My arms become dealers, when I’m holdin up that mic missile”

JS-1 takes the understated approach and allows the pissed and unrelenting Kris to vent his frustrations loudly – and it’s effective. Freddie Foxxx, Kenny Parker and Da Beatminerz all make contributions to this six song EP, and most are in fact better than JS-1’s track. “Omni Hood” is a throw back to the old “boom bap” sound Kris perfected early in his career, part “Dope Beat” and part “Outta Here.” Beatminerz do even better on “Wolf,” which Kris reminds us is the opposite of the word “Flow,” but perhaps errs a bit with a rhyme scheme that relies on rhyming that word too much – know, bro, hoe, go, show, low, reap what I sew, and so on and on like so. “I do things freely, I don’t believe in the dough.” Yet you charged $5.94 for the EP yo! I kid.

A KRS-One without contradictions is like a Kris Parker without his ego and convictions – uninteresting. While Lawrence could rest on his laurels after a long and illustrious career as orator, scholar and activist, he’s still out demanding respect like the skinny homeless kid who once rapped his way out of a homeless shelter. While it’s fairly obvious that he’s much closer to the mansion and a yacht now than he was back then, Kris can invoke the spirit of the struggle and still fight for his respect like that up and comer he was 30 years ago, and he almost makes it all the way to back in the day. That he doesn’t get all the way there doesn’t make the “Lyrical Ass Beatings” he hands out any less interesting, and the fact this is a six song EP actually helps on the whole for this concept – less is more. Next time I’d enjoy a little more of his hip-hop philosophy and spirituality but for now I’m happy to go “Back to the L.A.B.” with Kris. Even if he’s overreacting to a bunch of poseur rappers calling him an old fart on the internet, the beatdown he issues is still entertaining in 2010.