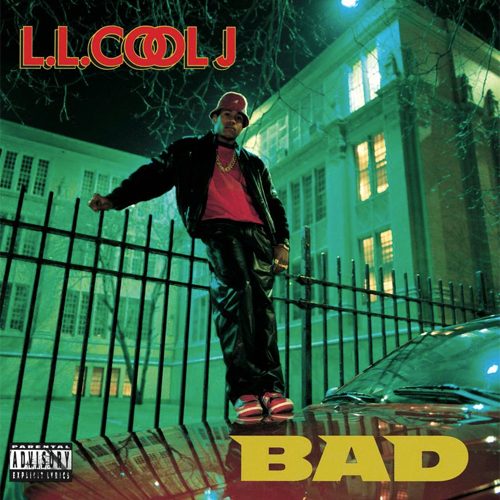 Two years after dropping out of high school and releasing his critically acclaimed debut album, “Radio”, L.L. Cool J returned with 1987’s “Bigger And Deffer”. This time around, the production duties were not handled by Rick Rubin, but rather the LA Posse. This production team was made up by Muffla, Big Dad, Bobcat, and DJ Pooh. On the front cover, L.L. is standing on a car that’s parked in front of the same high school he decided to put on the back burner. This picture was taken by the legendary Glen E. Friedman. Many critics feel that this album pales in comparison to its predecessor, but it was still commercially successful due in part to the singles that the album spawned.

“Bigger And Deffer” opens with the single that was released first, “I’m Bad”, which in my opinion is one of the best songs in not only L.L.’s catalog, but in hip-hop history, period. It had everything that you could ask for in a battle rap: a pounding beat, witty punchlines, fierce cockiness, and chest-beating bravado that dared anyone to step up to the mic. If you’re old enough to remember the anti-drug and damsel-in-distress themes of the accompanying video, then I’m sure you get a little nostalgic when one of the rappers of this era throws in one or two of the many memorable lines from this classic into their songs:

“Aaaahhhhhhhhhh…
No rapper can rap quite like I can
I’ll take a musclebound man and put his face in the sand
Not the last Mafioso I’m a MC cop
Make you say “Go L.L.,” and do the wop
If you think you can outrhyme me, yeah boy I bet
Cause I ain’t met a muthafucka who can do that yet
Trendsetter, I’m better my rhymes are good
I got a gold name plate that says “I wish you would”
And when rap begin then I gotta join in and
Before my rhyme is over, you know I’ma win
Cool J has arrived so you better make way
Ask anybody in the crowd they say “the kid don’t play!”
Slaughter competition, that’s my hobby and job
I don’t wear a disguise because I don’t owe the mob
Got a pinpoint rap that makes you feel trapped
So many girls on my jock, I think my phone is tapped
I’m bad!”

And that’s just ONE verse. As the album continues with songs like “Kanday” and “Get Down”, it quickly becomes evident that the production this time around is a little more busier. “The Bristol Hotel” is a narrative about a fictional hotel in Jamaica, Queens where a guy can get a little, uh…attention on any night (or day, for that matter) in Room 515. It’s a humorous departure from the heavy battle rhymes, and is followed by “My Rhyme Ain’t Done”, another playful song where Uncle L flows about taking a trip into a deck of cards, and another trip into the world of cartoons. “.357-Break It Down” gets back on the braggadocios side of things, as L.L. taunts the competition, “get in the ring, and stop being a sissy!”.

While the rest of the album has the strength to stand on its own, the singles are the reason that the LP remains memorable. Guitar riffs and scratching dominate the track on “Go Cut Creator Go”, the Def Jam take on “Johnny B. Goode” and a showcase for Cool J’s DJ, Cut Creator. “The Breakthrough” is another battle rhyme, and while it’s not as hyped as “I’m Bad”, it still manages to pack a punch (pun intended) and a few subliminal jabs at MC Shan. The song that follows paved the way for the love ballad style of rap. I can only imagine how many Will-You-Be-My-Girlfriend mixtapes started off with “I Need Love”. Still a crowd favorite at parties, the DJ can kill the sound and let the audience take over as soon as the needle hits the record:

“When I’m alone in my room, sometimes I stare at the wall
And in the back of my mind I hear my conscience call
Telling me I need a girl who’s as sweet as a dove
For the first time in my life, I see I need love
There I was, giggling about the games
That I had played with many hearts, and I’m not saying no names
Then the thought occurred, tear drops made my eyes burn
As I said to myself “look what you’ve done to her”
I can feel it inside, I can’t explain how it feels
All I know is that I’ll never dish another raw deal
Playing make-believe, pretending that I’m true
Holding in my laugh as I say that I love you
Saying amore, kissing you on the ear
Whispering “I love you” and I’ll always be here
Although I often reminisce I can’t believe that I found
A desire for true love floating around
Inside my soul, because my soul is cold
One half of me deserves to be this way till I’m old
But the other half, needs affection and joy
And the warmth that is created by a girl and a boy
I need love”

“BAD” closes out with “Ahh, Lets Get Ill” and “The Do Wop”. The latter features a constant doo-wop harmonization in the background and chronicles a day in the life of a young James Todd Smith, or at least we are led to believe so, until we find out at the very end of the song that all the women, joyriding, and concert performances were all just a dream. On the surface, the concept seems like it would be quite corny, but surprisingly it comes off well, and the song has a lot of replay value.

To date, L.L. Cool J has released thirteen albums, all under the label that he helped build…Def Jam. Twelve of those thirteen albums have gone gold, seven have gone platinum, and four have even reached double platinum status. He’s had battles with the likes of Kool Moe Dee and Canibus, and even made the jump to both big and small screens. The impact of this album can still be felt today in mainstream hip-hop with the flooding of what the Westside Connection would call “rappers in love…on the radio”. For many years, Ladies Love has proclaimed himself the GOAT, and while that dubious honor is one that continues to be debated year after year, it’s hard to deny the fact that his name belongs in the discussion. He’s bad.