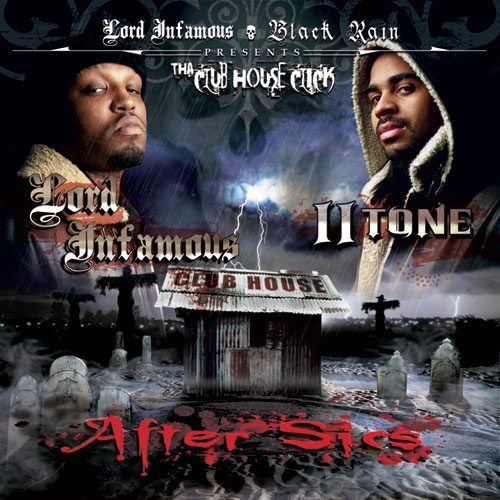 “After Sics” is former Three 6 Mafia member Lord Infamous’ third solo outing, and second since he left the Memphis group to form his own Black Rain Entertainment. Calling this a solo record is a little misleading, however, since labelmates Tha Club House Click are heavily featured. So heavily, in fact, that there are five tracks that don’t feature Infamous at all: Mac Montese, Area 51, II Tone, and Big Stang all have solo joints, and there is only one track where Lord Infamous handles the mic all by himself. As the man who proudly put the “triple six” in Three 6 Mafia’s original name, you can bet that this will be raw, and he doesn’t disappoint. Those familiar with Three 6 Mafia or Lord Infamous’ 2006 album “The Man, the Myth, the Legacy,” will recognize the themes on this album: tearing up the club, life on the streets, scandalous females, getting high, and getting laid. In other words, ignorant shit, but ignorant shit done well.

Maybe ignorant is too strong and judgemental a word: after all, Infamous makes no pretense at being anything thing other than street. Infamous and crew are all skilled at their craft, and they deliver their bars so convincingly that you can almost forget just how raw it is. Take “Uuugghh,” a diss track to “pornographic-ass, nasty-ass, trifling-ass” women. Over deceptively pretty piano and a skittering hi-hat, Infamous, II Tone, and Mac Montese savage a “fifty-kids-having nut-guzzling-ass bitch.” Their rapid-fire verses contrast nicely with the mid-tempo beat, and their disses are as funny as they are fucked up, so that you can almost forget how misogynistic the whole thing is. They get more laudatory towards women on “I’m Lookin’,” about looking for “the baddest chick with the sexiest walk,” with a “good mouth and pussy too/ the girl will even roll one/ she’ll smoke a dro with you.” Snuggles appears on the track to do a Southern version of Foxy Brown, minus the beautician assault.

Infamous and the Click don’t just focus their venom on females, however. On “This Ain’t,” Infamous warns haters, “I stab you so hard that your fucking head will spin around on your neck.” “Try Me” continues on a similar theme, with Krysis summing up Tha Club House Click philosophy, rapping:

“Yout try and play me I’m gonna show you ’bout that hood shit
Right after I get through rolling and smoking that good shit
I’m connected with Infamous but I ain’t talking about Mobb Deep
Even though I mob deep with niggas who spark heat
If you ’bout that drama, boy
Bring it like Osama, boy”

It may not be Shakespeare, but he gets his point across. The track also features bars from Mac Montese, Santerria, II Tone, Mad Keyz and Lord Infamous. Santerria is the second female rapper in the Click, and like Snuggles she follows the Baddest Bitch template, holding her own on the mic amongst the male rappers. “Grimey” and “The Streets” both deal with life in the hood, while “All I Need” discusses that ever-important subject, money. On “Work That Scale,” Area 51 gives a lesson in how to make money by moving bricks, a kind of drug-dealing infomercial. The content may not be brilliant, but Area 51’s double-time rapping over organs and G-funk synth whines makes it one of the better tracks on the album.

As with Infamous’s rapping, the beats on “After Sics” tread familiar Southern rap territory, but do it well. “Gonna Make It Shine” has a stripped down beat, with marching snare, some atmospheric keyboard, and not much else; “Fed Up” and “This Ain’t What You Want” are similarly sparse. On the other end of the production spectrum, tracks like “Try Me,” “The Streets,” and “High As A Fool” are full of swelling synths, clicking hi-hats, and bells. “I’m Out” even has what sounds like a theramin wailing in the background. A few beats sound a little generic, but that’s the worst thing that can be said about them. The majority are as crisp and clean as Infamous’ white T, and are a perfect example of the sound that the South has perfected. It’s unfortunate that neither the Black Rain website nor the promo CD I got have any information about the producers who worked on the album. Based on their work here, they are worth keeping an eye on.

“After Sics” may not be the most morally defensible hip hop album of the year, but if you are a fan of Three 6 Mafia or Lord Infamous, then you are probably already prepared for the fact that all of the songs will be about drugging, thugging, or bitches. Wishing Southern rap was less materialistic and mysoginystic is sort of like wishing that Southern food would have less fat and sodium. Like a plate of fried pork chops, “After Sics” may not be the most nutritious meal, but it tastes good going down.