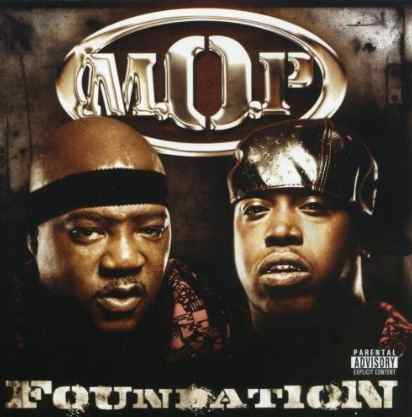 From 2003-2009, M.O.P. occupied the spot in hip-hop that Hollywood filmmakers often call “development hell.” The legendary Brownsville team of Billy Danze and Lil’ Fame bounced from one label to another, doing unsuccessful stints with Roc-A-Fella and G-Unit Records among others, in a never-ending quest to get a new album produced and released. “Flash – what theFUCK is wrong with you Dunn? You reviewed at least THREE M.O.P. albums in that span.” Yes, that’s true, but none of those albums came out on the label that M.O.P. was signed to at the time! It’s also debatable if they can even be considered proper albums at all: one was a greatest hits compilation, one was an experimental rock album under a different name and one was a mixtape. Every time I referred to a new album as “long-awaited” that’s exactly what happened – we all waited a long time and got NOTHING. That’s the textbook definition of “development hell” – nobody can agree on shit and nothing ever gets made.

No rap group with the large fanbase and critical acclaim of M.O.P. should have this much trouble putting out one full-length studio album, and our heroes had to resort to guerilla warfare tactics just to put out an unofficial edition of their Roc-A-Fella recording sessions. Then again you wouldn’t expect anything less gangster of one of rap’s most unapologetically macho acts. Their 15 year history in hip-hop is one song after another that leaves bodies on the pavement, leaking more blood than a UFC fighter’s face after being busted up with elbows. Some artists would risk coming off as a motion picture parody of urban warfare if they sported M.O.P.’s level of violence, but the Mash Out Posse has always walked the fine line between authenticity and absurdity to perfection. In between their shouting, posturing, and imitations of semi-automatic gunfire spray, Danze and Fame turn out to be adept lyricists who are often surprisingly introspective. “Street Life” off of 2009’s “Foundation” reflects that thoughtful balance between their rugged Brownsville bravado and good common sense advice:

Billy Danze: “Now you can sit around and watch it all go down around you
Or you can imitate the ways the killers and cars move
You can’t simulate the days when they played by the rules
And if you wasn’t in the maze you really can’t drop jewels
You really can’t understand, how a boy could be fooled
And when he turned 29 he still need to be schooled
See it’s a difference in takin a stand and mannin up
As apposed to bein a man and standin up
Listen I already been there
that book of live men small section of survivors my name in there
From rollin with the riders, you couldn’t pretend there
With live men beside us, we still couldn’t win there
They showed us how to send there, and get the attention of the Feds
And be the stars when the eulogy is read
The way they worshipin the bread, the day is not okay
For good people that may never get ahead, let us pray”

With DeMarco crooning the hook and the underrated Fame a.k.a. Fizzy Womack producing the piano-laced track, “Street Life” is as solid as a hip-hop song can get. “Solid” is actually a good word to describe M.O.P. in general. It implies everything one can like about this group – their unbending attitude, their diesel delivery, their well-constructed raps, their concrete street pounding beats. That makes the name “Foundation” even more apt for this album, since in many ways it’s a brand new start for Danze and Fame. You can’t build anything in life without a solid foundation under your feet, whether a home, a family, or a rap career. The songs found on this 14 track release should provide them all three. Every aspect any one has liked about the Mash Out Posse in the past can be found here, and any new listener that doesn’t know them yet will find a lot TO like. Tracks like the menacing bassline and beat of the Statik Selektah produced “Crazy” fit right into their lengthy catalogue.

Lil’ Fame: “Don’t let me tell you where I’m from (CROOK-NAM) we can’t stop here
We go to any other hood and set up shop there
Get guap’ there, try that in (BROOK-NAM) and get rocked there
If you lookin for brotherly love, it’s not here
Shit’s not fair, them young guns boys from (BROOK-NAM) run up
inside of number spots here, we got it locked here, we kill cops here
I’m one of those niggaz you witness livin the music
It only takes me one point two seconds to lose it
My shit bang inside of gamblin spots where niggaz throw dice
It motivate ’em for the whole night, niggaz be so hype
Niggaz already know what my flow like
My shit inspire riots with the po-lice, imagine what my show like!
It’s M.O.P. fo’ life
You never heard a nigga that spit it like Lil’ Fame in your whole life”

True indeed. Womack’s beat on “Blow the Horns” lives up to the title, and Danze’s deep raspy growl will make you want to salute by honking a car horn in tribute:

“Niggaz wonder how me and Fame remain strong
Five albums, six deals and we still on
My lil’ homies trainin to bang, we straightarm
To let ’em feel the pain of the game, we play God
So now, we back nigga with straight bombs
And.. in fact nigga it’s napalm
So stay calm, I get to twitchin my arm
Grippin hittin you with e’rything I got in my palm now”

Fame does his best to steal his shine though with some of his trademark humor:

“Here’s your chance to advance
Get in your stance, I shoot the holster off of cowboy pants
I borrow a rap line from a legend, and put it with mine
Whatever rapper shit is hooder than mine?”

I doubt LL Cool J could argue (and I know he SHOULDN’T argue). Just when you think their thuggery is about to go over the top, they balance it out with a track like the reflective DJ Premier laced “What I Wanna Be” featuring Rell on the hook. While it’s hard to imagine the testosterone-fueled duo ever having a song on the quiet storm, especially with comically rude lines like “same niggaz that’ll piss on you and tell you that it’s rainin,” this song certainly comes close. That’s the other reason Mash Out Posse is so successful though – even admist their mayhem and violence, there’s always a snap to make you laugh or an old school reference to make you smile. M.O.P. also know how to take the spotlight and make it theirs. Very few guest spots are offered and the select individuals who get them are expected to match the delivery and intensity of Fame and Danze. Fortunately Redman proves up to the task on “Riding Through,” as does Styles P on the pounding Green Lantern beats of “Bang Time.” Termanology also appears on the aforementioned “Crazy” but other than that the self-described “Rude Bastard” rappers need no assistance and expect no resistance.

In many ways “Foundation” reminds me of EPMD’s heyday in the late 1980’s and early 1990’s, where every single album was one you could listen to multiple times without getting bored, thanks to the beats and rhymes that didn’t disappoint from start to finish. The only problem with being 15 year veterans of hip-hop and Brownsville legends is that you aren’t just competing with today’s greats, you’re also competing with your own catalogue of classics. While it can’t surpass the legacy left by an album like “Warriorz,” it can stand up proudly next to it and respectfully ask you to “Salute a G.” After more developmental hell than a little bit and enough legal and financial setbacks to cause any reasonable person to quit altogether, it’s not only remarkable that “Foundation” came out but that M.O.P. still put together an album this strong and enjoyable. This will be remembered as the moment M.O.P. announced they were back to the world, and I expect the loud and proud Brownsville natives to keep making noise from this point on.