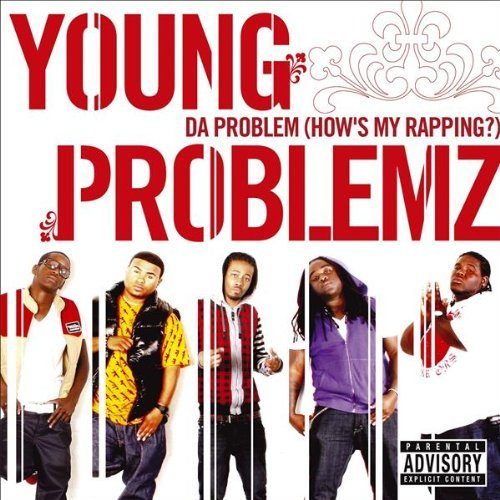 If ignorance is bliss then “Da Problem” is a heavenly experience. Much like our recently reviewed Lil’ Boosie album (“Superbad”), this album is all about bass-heavy production and makes little, if any, impact on the lyrical front.

What do you expect from a quintet that hails from Houston, TX? It’s not exactly a hotbed of wordsmiths, save for a few exceptions. No, this is dirty south music exaggerated to an almost comical level. Check the track names: “Boi!,” “Bout Money,” “Ya’ll Got Dimez,” “Got Me F’d Up,” “Knock Ha Dyne (LOL),” etc. Side note: the “LOL” is actually in the title of the track, it’s not me poking fun. There should be no surprises for listeners as they venture through this audibly aggressive disc.

“Bout Money” featuring Fat Pimp immediately establishes the members of Young Problemz as capitalists. A high-pitched synth over a marching snare perpetuates the suitable beat, created by member DatBoyChyco. The first verse is enjoyable enough as the artist DatBoyChico spits with his “Houston flow,” which is trademarked by a heavy Southern drawl. More importantly, short quips like “I woke up early, jumped in the studio/ Got to fuckin’ with Fruity Loops then here I am, sue me hoe,” are not necessarily clever, but do keep things entertaining. The main thing that hinders the track is the obnoxious and equally simplistic hook.

Further expounding on the monetary subplot herein, Problemz follow up “Bout Money” with a spiritual successor in “Count My Cash.” Similarly, the chorus has a screwed and chopped feel that includes a line as pathetic as “Brushed my teeth, took my bath, washed my ass, then I count my cash.” Pretty soon you find that the conceptual limitations of an album like “Da Problem (How’s My Rapping?)” really has a negative overall effect.

“Pull Your Hair” sounds like bad strip club music as the uptempo, dance-inspired backdrop is accentuated by a hollow tribal hand drum. Some of the lyrical content on the track is too heinous to delve too deeply into, but let’s just say that there are plenty of pussy references.

The two songs that differentiate themselves are “2 Church” and “Rescue Me” which speak mainly on the plight of each respective member as they grew up in a ghetto climate. The former, produced by Gabo & B Don, offers a musical landscape that is at least slightly more stripped down than the others and is accompanied by a bass guitar strummed by Damon (Big D) Reeves. “Rescue Me” is something of a storytelling narrative that speaks on hypothetical characters that are raised in the concrete jungle:

“Look, the jail is not a place for a real nigga
But when them problems come around you gotta deal with them
Little nigga from the hood he going to pack the steel with him
Running with the niggas he thought that would keep it real with him
Living with his Mama until his eighteenth birthday
She ain’t raise him to be a thug in the first place
He tried to keep the hustle to himself for her sake
But you can’t hide getting bread in the worst way
He hid a little so he bought him a whip now
Fucked a couple of hoes so he think he the shit now
A stand up nigga and he can’t even sit down
Got all the little homies round the hood wanna get down
Time passed by and the money is pollen
Homey’s got a dilemma, he the nigga they calling
Some people call it fate he call it fucked up timing
Took the pistol in the car with him, double the problems
The sirens…”

The track features two of the more capable members of the collective, which only helps matters.

“Love it when she call me Big Poppa
Bust that pussy open for me like a piÃ±ata
Get her in room and Imma beat it like a boxer
It’s YP, we get all the draws like a washer
If that’s ya gal, why she always over at my house?
She gave me some breast, legs and thighs like Popeye’s
Call yourself mad she’ll (…?) like cha cha
LMFAO Hahaha haha…”

This is backed up by proof that there is absolutely no essential listening material when the next emcee boasts, “Playing with my Wii but I’m not talking about Nintendo/ Smoking my cigar but I ain’t talking about no endo.” Even for those whom enjoy these childish endeavors, the simple and repetitive structure will likely get old.

“Boi! (Remix)” featuring Mike Jones and the virus Gucci Mane is the typical single. It has the guests who will lure fans that would not normally be drawn to the album and it has a really short, ringtone-ready, loop that will certainly appeal to those that are into stuff like Dorrough’s “Ice Cream Paint Job.” Given that, I don’t know why Young Problemz cannot succeed in today’s industry. The group seems to cater to the short-attention span of casual rap listeners.

Young Problemz answer the question they pose in the title of their new album, “Da Problem (How’s My Rapping?), with the bars they drop throughout. Sadly, their rapping is the issue. The serviceable beats overshadow the weak one-liners and overall lack of flow.