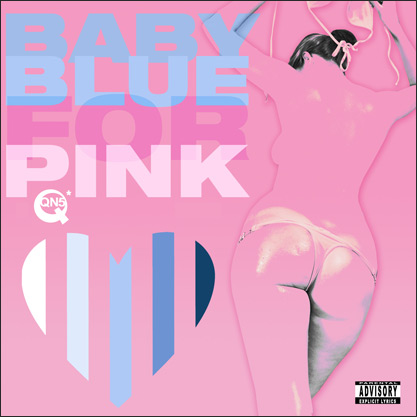 Marketed as an alternative to Michael Bolton for V-day fornication, “Baby Blue For Pink” is a half-serious, half-cheeky take on love and relationships (as the double-entendre title might infer). Mr. SOS’ “Digital Video” contains the most outright tongue-in-cheek sentiment, an earnest proposal for homemade pornography with the risible tagline “Let’s immortalize us, pull out the tripod // and on the road I’ma watch you on my iPod.” CunninLynguists emcee Deacon the Villain provides the sensual beat and adds the most potent verse: “When it’s Tool Time I’m Tim Taylor // I don’t wanna savor I wanna Justin Slay-ya.”

The best track is perhaps the sole remix, a hauntingly fatalistic reflection on a current relationship by Cashmere the Pro. The remix is almost undoubtedly an improvement on the original, as Kno creates a frighteningly beautiful arrangement of Indian-tinged strings and a New Birth sample in place of a chorus. Wrapping things up is Tonedeff’s “Close,” by far the EP’s sexiest (and raunchiest) joint. Tonedeff motor-mouthed cleverness is harnessed perfectly, here:

“My boner tells me he really hates ya guts, and that doesn’t seem right
Feel free to spit in his fuckin’ face and choke him ’til ya see white
I’m makin’ a beeline for ya seaside palace, so please guide me inside as we grind
Or until your shoulders are equal to ya knee height
While you continue to ride me like I was a speed bike
Put a fire up under your steamy Hot Fuzz like Edgar G. Wright”

Of the six-song EP, the only misfire is Session’s “The Letter,” a rather forgettable stunt track with a silly twist. As far as Valentine’s Day tapes go, though, there’s nary a label that can produce an object as charmingly tongue-in-cheek as QN5. While ostensibly minor, “Baby Blue For Pink” is still a wholly viable engagement.