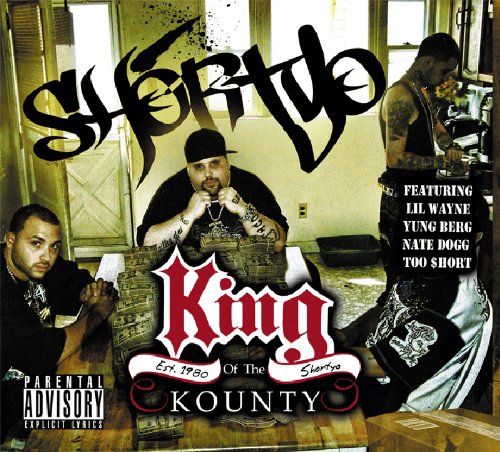 After listening to Shortyo’s “King of the Kounty” I’m well aware that talking shit on him will get me shot. He tells the listener quite a few times on track 16, “Boogie Picking Angelo.” So in the interest of keeping myself from getting shot I’ll follow my mother’s advice about keeping my mouth shut if I can’t say anything nice. So I would like to formally congratulate Shortyo for having some of the best ears in the rap game. From beginning to end “King of the Kounty” is one of the best produced rap records I’ve heard this year.

The music end of this release hits all the notes listeners could want from a rap record. Neenyo’s “Hypnotized” has the soft lush bounce of a Mariah Carey single. Basement Beats pop up throughout the record and always got my head nodding to their grooves with particular props deserved for the chaotic rave up of “Hear the Music.” It’s the kind of beat roller skate rink DJ’s fantasize about when they close their eyes. Drumma Boy brings the same fire he brought to T.I.’s “Paper Trail” album with “The Streets” haunting sonar bleeping keyboards. These are just a few examples, but rest assured Shortyo knows who to hire to make the music on his record make you want to dance.

Shortyo’s talent doesn’t just extend to producers though. He’s also a master of hunting down collaborators. The Yung Berg assisted first single “Stripper” features a trade mark nasally Berg verse about the glories of a talented pole ballerina both on the stage and in bed. Reed Dollaz throws down on “There He Go” challenging all comers with a warning that “what you do I do it greater/from the way that I grind you’d think I was a skater” and leaves his mark on the song. Too Short feels like he’s sleeping through his verse on “Curious” but even a shitty Too Short verse is better than no Too Short verse. And rap’s current running guest spot king Lil Wayne provides bars that throw back to the good old days before he discovered autotune as well as infectious hook for the song. J-Russ makes sure Wayne doesn’t overshadow him though on the track with his own brand of hyper active stoner fantasizing.

“I need a bitch with a cook game like Martha
Chef it up like Rachel Ray do some fuckin’ pasta
Or some lasagna, lets get this fettuccini
You could be my little Genie
I’ma treat you like a model”

Shortyo really has brought together a host a talented help to put together almost every piece of a killer record, everyone brings their A game and delivers when and where they were asked. Except it seems the maestro of the whole affair. I can’t remember a single line from his raps, though I did pick up that he likes strippers, loves his wife, and hates haters and snitches. And he’s incredibly consistent in talking about the things he likes. Perhaps all of his energy went into playing conductor over his record, exerting so much compiling producers and guest stars that when it came time to lay down his own verses the cat was pooped. I don’t know. A King is as much those who support him as anything else, and by that standard this King of the Kounty is strong. But without those watching his back it appears the emperor has no clothes.