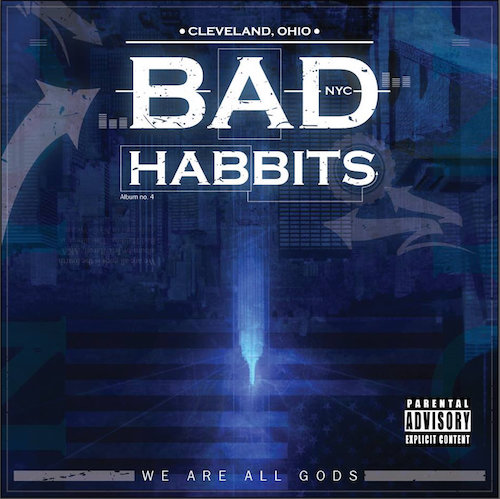 Bad Habbits :: We Are All Gods

One of the most common tactics used when trying to get shit covered is a friendly e-mail which says “Hey I talked to (*insert person you know*) and they said you were cool and you’d want a copy of this album.” This automatically causes my suspicious nature to take over. “Oh you did huh? Then how come (*insert person I know*) didn’t tell me you’d be sending this album? Why don’t I remember having this conversation?” I’m not saying it isn’t legit some of the time – or that the person whose name I’m redacting from this convo didn’t ACTUALLY tell Bad Habbits it was cool to send me their album. What I am telling you is that 99 out of 100 times it’s not going to work because it automatically makes me want to chuck the e-mail.

As it happens though Bad Habbits caught me in a good mood and I’m giving them the benefit of the doubt on this one — although I WILL e-mail the person they referenced after I finish this review to find out if this was all on the level (and remind him we get so much material I generally don’t need anybody to solicit more). If I were to hazard a guess the Habbits are pushing super hard to get this album out to the masses since they are doing the name your own price gimmick with no lower ceiling on the price — you can enter “ZERO” if you really want and try it out for free. Mr. Habbits is a NYC area rapper who originally hails from Cleveland that has been performing in the North Jersey area dating back to 2006, and already had three albums out by 2012. It’s not a condemnation of Habbits that I hadn’t heard of him or his catalog before this review — it’s just an indication of how overcrowded the musical marketplace has become. There are so many albums and mixtapes it’s not easy to get noticed — which is exactly why I tend to be wary of the tactics used to get attention — but I digress.

Habbits works chiefly with Sam Da Grouch, a man described in the press sheet for the album as “influenced by Dilla” though that seems to produce mixed results. On the minus side would be “Pain Is Violence,” a track that left me constantly feeling like the instrumental wasn’t looped properly, a split second out of sequence each time it came back around until the point it felt like driving a nail into your ear. I can give a positive recommendation on the whole. Tracks like “Rain Vibes” are uncomplicated but not unpleasant — the head nod vibe works and the guest singing by Ayanna on the hook doesn’t disrupt the proceedings.

The most obvious connection to Dilla would probably be “Donut Lessons,” although the vocal samples are going to make you think of Notorious B.I.G. instead. Even though his name implies suspect behavior, Bad Habbits is actually a thoughtful gentleman who wants to embrace living more positive and encourage others to do the same.

“Wish the 20-something me could just hear this
Your dream and ambitions replaced with repitition
Now you find yourself in a strange position
and transition, but don’t be locked in your prison
Live your life with a mission for your own enrichment
Don’t stop the sea of change, we can go swimmin
We can’t change our age, what we gained is wisdom
I ain’t a young man, but I ain’t old either
Wanna be in the moment with the spirit and teacher”

Habbits maintains the main star status on “We Are All Gods” save for a couple of appearances by Emmo Gun (on “Mic Hassle” and “Brooklyn Knights”) and a posse cut called “The Trinity Three” produced by one of the rappers on it – and he made the second most skippable song of the album. It’s trying to be a throwback to 1980’s tracks with a bare bones instrumental and hot spitters but it overshoots the target. The only other guest produced track is “The End/Ten Steps” and Mantis makes a keeper. Speaking of keepers “We Are All Gods” falls into that “just above average” category for me. I can see a glimmer of potential on songs like “So Far” but something about the mix seems off — like Sam couldn’t get the vocals by Habbits to mix clearly so he just kept turning down the track until the emcee could be heard. I kept cranking up the volume on my computer and my headphones until I hit the max and realized it wasn’t on my end. It’s these little technical issues that keep me from rating “We Are All Gods” higher. As ten year veterans of the rap game these should not still be problems and they need to be addressed.

Bad Habbits :: We Are All Gods
6Overall Score
Music6
Lyrics6