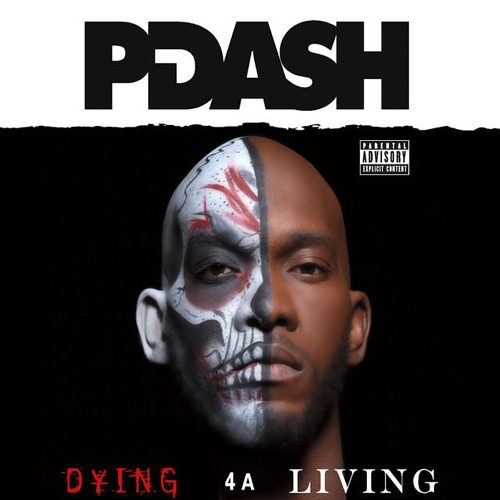 “From slavery we wept tears, from all of them kept years
Do this for my peeps who never got the chance to rep theirs
Some people take the ELEVATOR to the top, I step STAIRS
Starting from the bottom was the same place where I left fears
Reached another level showed the devil that he’s less fierce
Don’t ask HOW, WHAT, and WHY got to HEAVEN cuz WHO the HELL cares
Put work in for the GOVERNMENT, jeopardizing my WELFARE
Funny the same GOVERNMENT jeopardizing our HEALTHCARE
Hate to push the buttons but come on just being real here…”

“Dying 4 a Living” made an impression before I opened the album. Reviewers are used to receiving self-released albums by mail in the form of a burnt CD-R with a handwritten label. P-Dash ain’t goin’ out like that though. Even though he’s his own label of record, under his real name of Bryant P. Robbins, Dash still spent the cash to have his album get a proper print run. It comes in a foldout digipak, with a full insert that has all of his album’s lyrics and production notes, although it’s somewhat redundant in the latter case since all songs besides “The Format” are self-produced. Either way it’s clear P decided not to half-ass this album in any way, even getting his face painted and professionally photographed for the cover artwork.

Even though I’m relatively new to P-Dash, the level of care and detail suggests he’s not new to the music industry, something his bio makes perfectly clear. Creeping up on 30 years of age, he doesn’t have the time to waste half-assing any part of his effort – he’s not making rookie mistakes he’d have to rebound from or correct later on. He’s here to put in “Work.” The song is a spiritual successor to Kool Moe Dee’s hustle anthem with a much more Southern swang.

P-Dash’s thoughtful lyrics keep the listener engaged throughout the near 60 minutes of “Dying 4 a Living.” He’s grateful for being shaped into the man he became on “Letter 2 My Teacher,” something we should hear more of in society – and not just from our emcees. “Only My Tears Can Explain” is his personal confession of hardship and loss, with P not fearing showing us his vulnerable side. He also shows us his self-motivation on “Get Up,” which is also an anthem to get everybody off their ass and put in the effort he does.

“First things first don’t do this rap shit to stand out
My plans bout to minimize the folks holding they hands out
Whether you’re on the corner bumming or all day at your mans house
Relying on government funds, crying cuz they ran out
It’s hard to believe you can RECEIVE when you ain’t RAN ROUTES
When chasing the greed most people bleed cuz it don’t pan out
It’s time to proceed so take heed to what your plans bout
So you can grow SEEDS with no WEEDS then watch your plans SPROUT
Everybody want something but don’t know how to get it
Pride in they way, hide it away and just admit it
Swallow that shit, ask somebody who done did it
Since they done done it, I mean that’s if you want it
Stop gettin blunted…”

There are only two drawbacks to “Dying 4 a Living,” which I’m somewhat reluctant to mention given P’s drive and professionalism, but I’d be doing him a disservice if I didn’t. The first is that P-Dash seems to be stuck in second gear emotionally with his flow. Since he’s a former army soldier he’s probably used to staying cool even under the most intense of situations, but I’d like to hear the mood of “Only My Tears” match the words a little more closely – he raps it just like every other song on the album. Regrettably his self-produced beats are a little blase as well. None of them are bad or unlistenable, but none of them are that fire, and when Cedric ‘Neo’ Gaymon steps in on “The Format” the difference is immediately noticeable. Since Mr. Robbins is already willing to invest the money to put out a polished album, I want him to save up the proceeds and get a few tracks from Statik Selektah or Alchemist. P-Dash has the focus and the commitment, but his own beats won’t take him to the top. Other than that “Dying 4 a Living” has a lot to offer the listener and is worth your consideration.