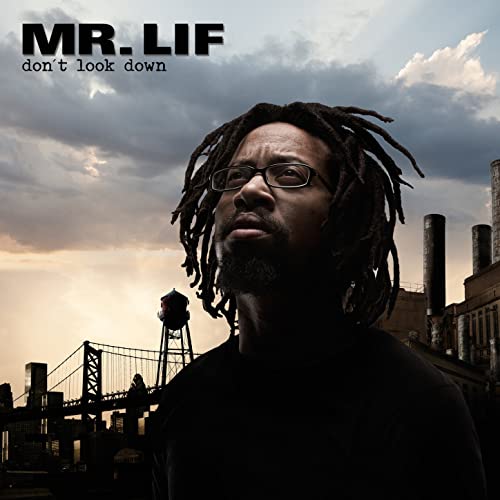 Jeffrey Haynes needs to have a talk with the folks who edit his Wikipedia entry. Ostensibly articles on the site should be based on verifiable facts and not read like (at best) idle conjecture or (at worst) a press release from a publicist. Allow me to give you an example of the latter: “The Emergency Rations EP book-ended collaborations with Edan and Akrobatik in an MC abduction scenario, while the I Phantom full-length formed a saga that led him from birth to apocalypse.” Those type of conclusions are best left to either someone authoring an album review or soliciting coverage for one. “A saga that led him from birth to apocalypse.” C’mon now, let’s be for real. That’s an unnecessarily pretentious description of Mr. Lif’s music.

I can understand how a random editor might get carried away by their enthusiasm when listening to “Don’t Look Down” though. Haynes is the kind of emcee that polarizes listeners, and if you form a positive attraction, it will carry you through his entire catalogue. I used to describe his vocals as monotone, but that’s a disservice to both the artist and the reader. It would be more accurate to say he’s “deliberately subdued.” If he was truly monotone you wouldn’t notice a shift in his pitch when he poses questions, describes emotional situations, reveals insightful truths or reaches a powerful conclusion. You can hear all of that in “Everyday We Pray.”

The good news is that Lif tends to polarize people with a positive charge — myself included. If you look at the like/dislike ratio for his songs there tends to be 5-10% who just don’t dig the sound of his voice. If 90-95% do like you that’s enough to build a career on, which is exactly what the Boston emcee has been doing since the late 1990’s. Along the way he’s made some powerful friends in all aspects of hip-hop, which is why you can end up with a supergroup like The Perceptionists forming for “Mission Accomplished,” or you can find Fakts One producing “World Renown” while Del the Funky Homosapien trades bars with Lif. Both songs are fresher than towel from out the dryer.

The longer you spend listening to Mr. Lif, the more you notice and appreciate the time he spends working on the lyrics he spits. His distinctive flow could carry him through phoned in performances if he let it, but songs like the opener “Pounds of Pressure” live up to their name. Lif provides a chilling tale of love with a twist — the protagonist’s beau has a stalker who refuses to take no for an answer. Punctuated with sound effects from gun shots to creaking doors, the track is cinematic in the very best way.

“Where do I start? Should I provide a method for you
What would you do? You’re up against your moment of truth
You’ve got a gun in your right hand, you soaked through your sweatband
The opposition says (‘You ’bout to die! You’re a dead man!’)”

Now if those aforementioned Wikipedia editors were more clever, they would have written about how “Don’t Look Down” is a “birth to apocalypse” scenario in reverse — an album that starts with the worst day of someone’s life, then ends with a title track made by Synesthetic Nation Music that inspires hope. “I used to look up at night and see the sky/now I am the sky/now the planet’s I/used to use a telescope to see.” He doesn’t need his eyes or a magnifying lens to view a bigger picture any more. “Where we walk there is no ground.” It’s not often that I refer to a rapper as spiritual, but what’s refreshing in this case is that it’s a universal spirituality not confined to any single religion or belief. Slap a “T” at the end of his nom de plume and Jeffrey Haynes will Lif(t) you up with this album.