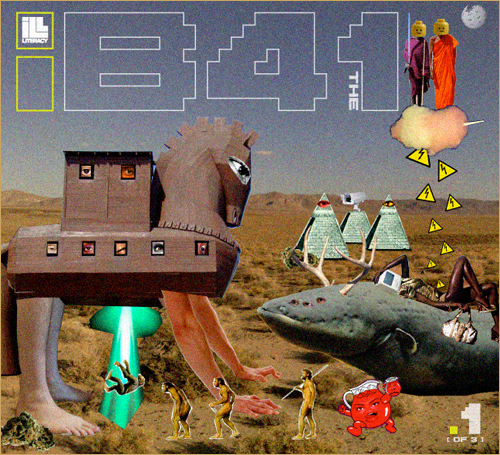 A couple of weeks ago, I thought I had recieved an extremely oversized packet of tropical punch flavored Kool-Aid. Even more weird was the fact that I had actually purchased the traditional sized packet earlier in the day. However, to my surprise (and slight disappointment), it was the first release from Oakland trio, iLL-Literacy. The group consists of Dahlak, Drizzletron and N.I.C., and seems to draw influences from any and everything, ranging from afrobeat to X-Men. The self-proclaimed Ritalin babies have decided to release their album in three separate chapters, for the benefit of any others like themselves who lack the ability to sit still long enough to listen to an entire release at one time.

This first chapter opens up with the introductory “HiHowRu” which starts off with the iLL take on the old “Wade In The Water”, but soon morphs into a psychodelic-funk inspired sound and a minister telling the congregation to “turn to someone beautiful” and say “hi”. The promotional single was “Gentleman’s Kool-Aid”, and further explained the big ass Kool-Aid packet in the mail. The song itself is a fast-paced, high-tempo exercise as they make reference to the Heaven’s Gate cult and also the Jim Jones led People’s Temple when mentioning being “off that Kool-Aid” and the possibilty of seeing Heaven’s Gate. To be fair to any advocates of Kool-Aid or employees of Kraft Foods (Kool-Aid’s current owner), Jim Jones actually used Flavor Aid in his cult’s 1978 mass suicide in Jonestown.

Besides playing on the title of a popular 2003 film, “Finding Emo” also touches on many of the convictions that many older generations have in regards to younger folks and is easily one of the standout tracks on this first chapter of the album. The other standout is “The HereNow”, a bass, piano and percussion-heavy track about courting the ladies. It’s a bit slower than the other songs, but it still works well.

“I was thinking I was gonna be good, when the economy’s good
When the money started coming like it… should
All I ever needed was an inch
when I finally got an inch, I was gonna need a… foot
And the feet need sneakers (Jordans!) jeans and a matching t-shirt
Get a foot, need a mile
but don’t wanna walk a mile in my shoes… need a car with some speakers
A garage and a driveway to keep it
And a lawn on the side, yeah, the greenest”

The tempo picks back up as “Circus Nights” closes things out. If this first chapter is truly indicative of what the entire album will consist of after all the chapters are released, then I think their following will continue to grow. The highly creative promo packaging had me heading to my cabinet to compare it to an actual packet, and the attention to detail is amazing. In fact, it’s one of the most creative approaches I’ve seen in years. And much like actual Kool-Aid, there’s enough flavor here to satisfy just about everyone. So pour the contents into your iTunes, stir it up, chill and enjoy!