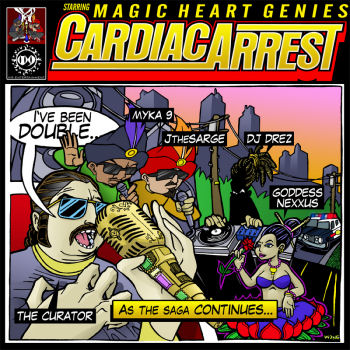 Freestyle Fellowship but if you DON’Tknow, you probably never will. He’s not the type of artist you discover by accident. His musical and lyrical styles don’t fall into any of the accepted hip-hop cliches, unless “eclectic” is a cliche, so you either follow the West coast underground hard or someone hipped you to his shit. He’s also a love it or hate it lyricist because of his eclectic nature – one person’s 10 is another writer’s 2. There’s no middle ground – he’s either an eccentric genius or he’s just too weird for you to dig.

Despite the impossibility of being in the middle on Myka 9, I’ve tried like hell to do so over the last 15 years. As with some of hip-hop’s other eccentric artists, I’ve often found that 9 is best served when he’s paired with a good team and given a great theme. When 9 gets the chance to put all that energy and creativity into a narrowly focused product, the results are often capable of crossing the boundaries of his cult hero underground family. Having formed a new group called Magic Heart Genies last year with likeminded Cali artist JtheSarge, 9 began to tap into that potential by giving the audience an insight into their demented musical styles. Whenever one member of the group strays too far off the beaten path, the other is there to pull him back in to keep the songs moving along. You can hear their style continuing to evolve on their new album “Cardiac Arrest” on songs like “Designated Driver,” where abstractions are eschewed for storytelling about a protagonist who makes bad choices behind the wheel:

“I haven’t been sober since I was a minor
I tried walking a straight line but now I’m reaching for my visor
and my ID, got me signing the alphabet backwards
I start talking nicer – tell me to touch your nose
Awkward, I know, point oh eleven, appalled
Blood clotting, yes friends don’t let friends drive bent
Mr. Magoo, roll like a fool, drunken asterisk style karate cool
20 miles an hour in a 65 MPH lane carpool
Going against the grain – who are you?
How many drinks did you have tonight sir?
Mothers Against Drunk Drivers are MADD at impaired motorists
Even if you only been in a bar or two
I’m blessed to be used as a vocalist in the cipher on this PSA”

The flows actually SEEM a little drunken despite their sobriety, particularly 9’s. Neither artist is overly obsessed with staying on beat, preferring to use it as a loose guideline to direct their flows, and traditional rhyming bars get thrown out the window in pursuit of poetic creativity. Songs like “Use Your Head” take their title quite literally when you hear lyrics about “candelabras from Constantinople” and “bisecting variables.” Some listeners may need to pull out a dictionary to follow along. On the plus side, Sarge and 9 make their presentation more palatable by presenting their adventure in a comic book format – battling against “the evil Dr. Wesley” to regain a stolen “Heartifact.” Thanks to production by the Genies and scratching by DJ Drez, things start to coalesce together to the point some songs fall into the groove and don’t try to go over your head. “Snake Charm” is that hitting skins tale complete with a “let’s get this started shorty/move your body” chorus to emphasize their “mackin point of view.” The uptempo “Good Look” is a throwback to 9’s time in the Freestyle Fellowship with musically harmonious and easily accessible flows, where 9 brags “I still rhyme like them b-boys in them Kangols.” Sarge and 9 have perfect yin and yang as they get “Closer” trading bars and styles, while “Let’s Get It” lets them flip advanced linguistic styles over bouncing flutes.

I want to be perfectly clear about this album – Magic Heart Genies “Cardiac Arrest” is not for everyone. It’s definitely for fans of Myka 9, and it’s definitely for anybody who enjoyed their last album and wanted to see if they could evolve that union to a higher level. It’s clear from dissecting this 22 track CD several times that there’s a lot this team has to offer, and that the complexity to be found within will actually keep this album interesting over the long haul when the simplistic raps of Gucci Mane and his ilk will quickly be disposable within months of their release. That’s all well and good for Sarge and 9 but there’s not a whole lot hear that could comfortably fit into a radio rotation and get them exposure on a larger scale – maybe on college radio or internet mix shows. The good news for 9 is that he’s already built a whole career on appealing to a niche and done so quite successfully, so if the Magic Heart Genies continue to play to said niche they should be just fine, and unlike some of his more esoteric solo albums there’s a SMALL chance “Cardiac Arrest” can widen the scope of his fanbase a bit.