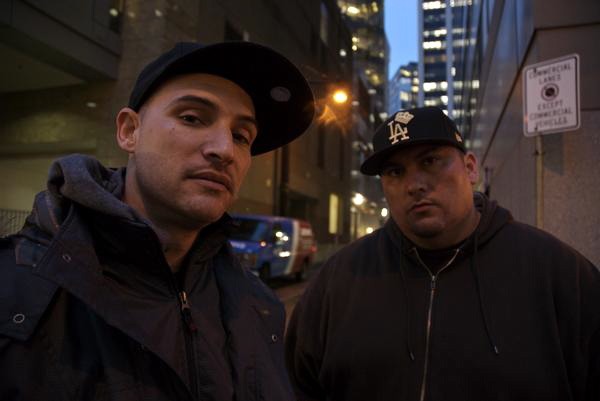 As two of the founding members of LA Symphony, CookBook and UNO Mas have had the West Coast buzzin for over a decade. During that time various members of the group, including CookBook, have released solo albums, and Cook and Uno have been releasing albums as a duo, as well. On January 26th they’ll be droppin their latest Cook and Uno album, C+U Music Factory.

Hip-Hop has a long history of two man tandems, and when RapReviews sat down with Cook and Uno we learned there’s quite the long history behind theirs. During our interview with the dynamic duo they also gave us some food for thought on why we don’t see very many duos in hip-hop anymore, how they manage to voice things they’re passionate about without cursing, and how their ethnic roots, with CookBook being Puerto Rican and UNO Mas being Mexican, have affected their music.

Adam Bernard: LA Symphony is a large group. There are a plethora of people you could have paired up with. So why Cook and Uno? What makes this pairing work?
UNO Mas: It’s simple, we grew up with each other. Before there was an LA Symphony, or Pigeon John, or any of those guys, we had been growing up skateboarding around the same neighborhood.
CookBook: We started rapping together in school and not long after that was when we met the other guys from LA Symphony. We kind of came into it together so we’ve always done music together.
UNO Mas: It was always our vision, or our dream, to do music together, me and him. When LA Symphony came along it kinda became a group thing and the focus went on that, but now that we’re doing it again on our own terms it’s kinda like we’re starting over again, so to speak.

AB: Your latest project is C+U Music Factory. With a title like that are you gonna make us sweat till we bleed?
CB: You know what, I hope so, bro. I think we poured a lot of our sweat and blood into it and we hope you will sweat and bleed with us. I hope you and at least maybe 100,000 of your closest friends will do the same.

AB: What’s the album all about? I know it’s not really about making us sweat till we bleed.
CB: No, not at all. We really like to have fun and not take everything too seriously, but we did want to make an album that ran the full spectrum of who we are. Being in such a big group as LA Symphony people don’t always realize who you are as an individual, so when we make our music we really try to personalize it and let people learn about who Cook and Uno are. I think that’s the overall theme. The title obviously is a funny play on C+C Music Factory, but it’s also a statement that we’re hard working and we’re in the lab puttin out hits.
UM: We’ve been making a lot of music for the past three years, since LA Symphony has been slowly going into hiatus, so right now we’re kinda like a factory pumping out songs.
CB: That’s what we’re dedicated to and that’s what we want to be doin, creating great music. We see it as our job, our mission, the whole deal.

AB: In what ways do you feel your ethnic roots inform your music?
CB: I think that us being Latino, we see ourselves as part of hip-hop just like any other ethnic group. We have a lot of fans who would always hit us up and say “you guys are Latinos, how come you don’t rap in Spanish?” We kinda didn’t see it like that, like we should be rappin in Spanish because we’re Latino. We’re like nah, we’re hip-hop. We grew up in LA. We CAN speak Spanish, but that’s not how we saw ourselves. We just saw ourselves as part of the hip-hop landscape from the beginning.
UM: This is actually the first time that we’ve kind of rapped in Spanish. I’d never had a thought to do that. I am Mexican and I’m proud of it, but it’s never been something like oh, I want to start rapping in Spanish. For some reason it just kind of worked out that way.
CB: I remember being a little kid starting to rap, it was like ‘94ish, and I remember kinda feelin like there weren’t a whole lot of non-African-American rappers at the time and my boy who was a DJ told me “hey man, you shouldn’t trip, you’re Puerto Rican, bro. They were there at the beginning of hip-hop. At all the rooftop parties in New York it wasn’t just Black people, there were Puerto Ricans there, too.” I remember hearin that and feelin real confident after that like aw, I’m good then. I don’t have the everyday regular Puerto Rican experience, the whole New York east coast thing. I’m like the Lone Ranger out here in LA. They don’t even know what a Puerto Rican is, practically. They’re like what, are you like part Mexican? So I know the roots and all that of hip-hop and New York, but I didn’t live it, I just live my west coast experience.
UM: And I’m real proud of my Mexican heritage. I’m proud of my family, I’m proud of the work ethic my family has put in being in this country. I think in hip-hop you’re always boastful, in a way, about where you come from, or what you do. If you’re real with your music obviously you’re gonna speak on your life and your family. We talk about our ups and downs and our struggles and how we persevere through stuff, and not just through hip-hop, but through everything we do in our lives. Hopefully someone out there can relate to where I come from.

AB: You guys keep it clean with your lyrics. With so much cursing in rap music do you feel it’s easier, or more difficult, to get across a point you’re passionate about without using curse words?
CB: You know what, that’s a good question. I think, to be honest with you, I’m so used to the way I rap that it doesn’t even occur to me. I don’t write raps and say “God I want to say bullshit right here, but I JUST CAN’T!” If I’m driving in the car, or hanging out with my friends, and I get passionate and I cuss, then I do, but when it comes to writing music, for some reason, I guess I’m trained, you could say, I’m just so used to it that I’ve never had that problem. I just write my raps and I feel like the passion is coming out and I feel like I’m getting my point across and it just never even occurs to me.
UM: From the start we just wanted to make music, intelligent music. There are many other ways to get your point across without having to bring yourself down to that kind of language, in my opinion. I’m not saying I’m holier than thou and that I don’t use that language in my everyday, I’ve just never chosen to actually record that kind of stuff. It’s just a preference. When I’m not doing music I’ve worked at schools as a PE coach, so it’s not something that I’d want my kids to hear. That’s just the way I am.

AB: You’ve been a PE coach? Are you knocking little girls out like that gym teacher did on Jersey Shore?
UM: {*laughs*} Nah, that was ruthless right there. When I saw that little clip on the news I was like man, that’s pretty raw dog right there. That’s what I’m talkin about, you gotta represent right. Obviously that fool is not gonna be teaching anywhere anytime soon.

AB: Yeah, I’m guessing he’s long gone. Speaking of disappearing acts, we used to have a lot of dynamic duos in hip-hop – Das Efx, EPMD, Camp Lo, etc. – but now there seem to be few and far between. Why do you think we have so few duos in hip-hop right now?
CB: I think people are a little more self-centered, selfish, greedy, however you want to say it, and to tell you the truth, it’s easier to be a solo artist because it’s your opinion, your direction, your whatever, so you can do whatever you want and do your music however you want, AND there’s more money at the end of the day. Any group, whether it’s two or more, the dynamic just creates a more and more difficult situation. The energy can be really good, the playing off of each other can be really good, it can create really great music, but a lot of people, I think, don’t care about that as much anymore as “lemme just do it myself. Lemme handle business and get this money.”
UM: In hip-hop, and music in general, there’s a lot of arrogance and a lot of me me me. When you’re in a group there’s a lot of give and take and you have to squash egos a little bit and listen to your partners.
CB: The thing you have now is more like crews, like a G-Unit, where it’s a collective of solo artists who will do songs together. You see a lot of projects, or one ofs, that are duos, but I think it’s more just another “let’s do a duo with this cat for another couple bucks over here.” I don’t want to belittle it too much because I think in the independent rap world, and even in the mainstream, there are definitely people who will hook up and do a project with another person because of the love.
UM: I think to be a successful duo, though, you have to have known each other for a while and I don’t think some groups can stick it out for a long period of time.

AB: Finally, going from duos to larger groups, when will LA Symphony be back in the studio together?
UM: Honestly, I don’t know. I think we’re all content right now to do our own music and give ourselves the space to do our own music. Recently, we were watching a documentary on the director of Boondock Saints and were talking about how the documentary relates to the LA Symphony story, so something we were throwing around was doing a documentary on LA Symphony. I think we might see another LA Symphony album two or three years from now. I will never shut the door on it.
CB: The funny thing is right before you called I hung up with Joey The Jerk and we were just talking about that. We were talking about what would the right scenario be for LA Symphony to do another record. We’ve had a few offers, and it’s not that we don’t want to work together, that’s not it at all, it just has to make sense, it has to be the right situation. UM: We’ll know when the timing is right.