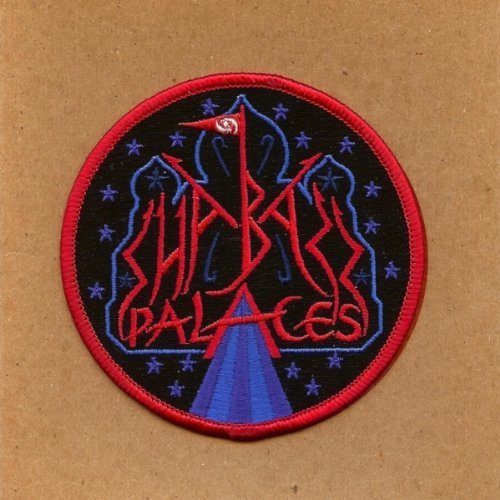 Shabazz Palaces is the new group of Seattle-based rapper Ishmael Butler, better known in the hip hop world as Butterfly from Digable Planets. The whole project is shrouded in mystery, and until recently Butler was trying to stay anonymous. Shabazz Palaces has been germinating for a few years, but they really made a splash last year with two untitled EPS, both of which featured removable patches with Islamic art.  They played their first live show at Neumos in Seattle on January 8, 2010, which is how I found out about them. I got an email from a friend who was at the show and it said simply, “I think the Seattle hip hop is about to blow up. I went to see Shabazz Palaces on Friday night and had my mind blown.”

She sent me a link to a review in The Stranger that had some live video. The sound quality isn’t great, but there Butler is, in full turban with sunglasses, rocking the mic while simultaneously handling the boards. It looked promising enough, so I went on their website, to see what they had to offer. They’re selling both EPS, but charging ten bucks for a download and fifteen bucks for a hard copy. That includes a patch, sure, but charging ten or fifteen dollars for eight songs was more than I was looking to pay, and out of synch with current music pricing structures. Luckily, it was only seven credits on Emusic, so my cheap ass was able to download it without having to fork over what at the time seemed like an unreasonable amount of money for a group I’d never heard.

I put it on in the background and half-listened to it while I was doing something else. It sounded pretty unimpressive to me. Sparse, electro beats over gangsta/bohemian rapping. THIS is what Seattle’s getting so excited about? However, I know my friend, and she has excellent taste in music, so I decided to give Shabazz Palaces another try. This time I really listened to it, with headphones and without distractions. It didn’t take long for me to understand what all the hype is about.

It opens with “Kill White T…” a pun on both “crisp white t’s” and “kill Whitey.” The song has a snapping beat, some rattling percussion, and some electronic sound effects. And that’s it. It’s as stripped down as you can get without going a cappella. I recognize Butler’s voice from his Digable Planets days, but he ain’t spitting no jazz rap here.

Before I continue, let me state for the record that Digable Planets were a much better and deeper crew than they get credit for. Their sophomore album “The Blowout Comb” is much funkier and angrier than their debut, which is a stellar album in its own right. They were good rappers, good producers, and it isn’t their fault that they got lumped into the stillborn jazz rap movement. They weren’t as visceral as the Wu-Tang Clan, and they didn’t capture the zeitgeist like the Notorious B.I.G. did, but they deserve credit for their contributions to hip hop. So Ishmael’s bona fides are in check, and the fact that he has returned to rap with such amazing project is a gift to hip hop fans. He’s not playing a young man’s game, he’s showing the younger generation how it should be done.

From what I can gather from articles written about the group, production credit goes to local Seattle indie musician Erik Blood, who handled beats, synths, and percussion. Almost all of the songs follow the sonic template of “Kill White T…”: electronic drums, a few synth flourishes, and little else. It brings to mind the Clipse’s “Hell Hath No Fury” without the crack rap. The music is often deceptively simple. At first listen, it sounds like a lot of other street rap. When you really listen, however, you realize that there is much more to it.  Take “Blastit,” which features an African thumb piano over hard-hitting 808s. It’s perhaps the best idea of the concept that Butler is going for: music that is unique, immediate, spontaneous, and contains African influences along with it’s American roots.

Lyrically, Butler message is equal parts revolutionary, black nationalist, street, and bohemian. He comes off like Kool Keith on a pan-African trip. Anyone familiar with his bohemian jazz cat persona will be surprised by the sharp edges here. While a lot of the excitement around Shabazz Palaces is about the beats, most of the hype around the project revolves around the lyrics. Shabazz Palaces manages to have the hard edge of street rap without the mindless thuggery and materialism, and the righteous anger of conscious hip hop without the self-righteousness. It’s unpredictable, it’s dangerous, and it’s done really well.

The group is looking to put out an album this fall, and is talking to labels and distributors. As much as Seattleites must love having their own little secret band, Shabazz Palaces have far too much potential to be wasted as a cult act. I’m ordering both albums at fifteen bucks a pop, and it feels like a bargain. This is some of the most refreshing hip hop I’ve heard in a while, and I can’t wait to see them live. Ladies and gentlemen, I present to you Shabazz Palaces, the next big thing of 2010.