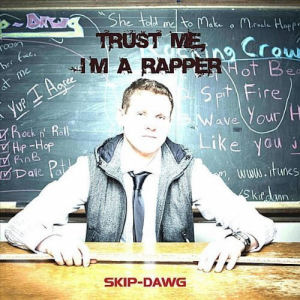 FYI: This is an awful, awful introductory sentence to a press kit. If simply skimming through the tracklist of an album and noticing superstar Lil Wayne alongside seeming nobodies like Double A and Rymedy does not scream of desperate opportunism, that intro will certainly drive the point home.

Farther down the press kit, we learn that Skip-Dawg has three prior albums, graduated from Princeton, and is described as a cross between rapper T.I. and Justin Timberlake. Who exactly describes him as this pop superstar hybrid is never disclosed, but there’s a line in the second verse of Jay-Z’s “The Takeover” that feels especially pertinent. Of course, Skip-Dawg himself is probably not responsible for such laughable hyperbole, and these are unfair expectations to throw upon a guy who is already handicapped with the presumptions that come with looking like a white-collar Asher Roth.

And expectations are a bitch. Without them, disappointment doesn’t exist, nor surprise for that matter. So while critics are required to minimize the effect of expectation on our listening experience, most people don’t have this responsibility. So I’m not going to censure Skip-Dawg for not sounding like T.I. or JT, but rather for being a wholly pedestrian musician.

“Trust Me, I’m a Rapper” is essentially a collection of half-baked attempts at club bangers, complete with tone-deaf flows and obnoxiously self-delusional narcissism. If Skip-Dawg is indeed a Princeton graduate it seems his class schedule must have been filled with such courses as Shameless Namedropping 101 and Intro to Shitty Synths. There is nary a moment extractable ingenuity or intelligence, as the rapper instead rattles off sickening couplets like “You got a body like ’90s J-Lo // I wanna squish it in my hands like play dough.” The production never aspires beyond frat-house anthem material, as if created from a one-hit wonder instruction manual. To no one’s surprise, Lil Wayne’s appearance consists of a grating, sheepishly crooned hook that might have literally been recorded in five minutes.

The album is mercifully brief at nine tracks, including a Club Mix of the album’s intro, just in case you missed out on the chance to dry heave at the line about flowing like Hov. Surely the album’s title was an attempt at cheeky self-deprecation, but after giving the record two spins, I’m going to need more convincing.