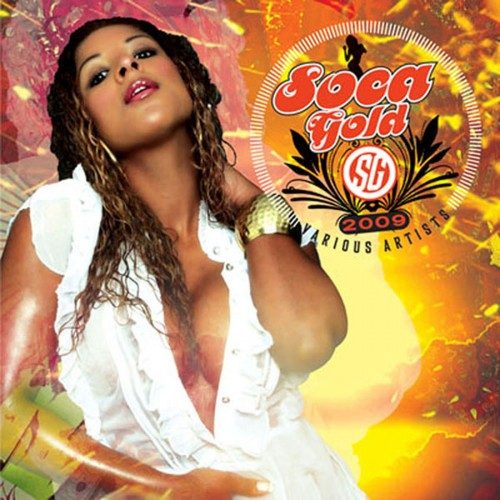 First off, I’d like to offer an apology to the good folks over at VP Records for getting to this compilation so late. I’ve had it in my possession for a good while, but somehow it got pushed to the backburner’s backburner. I realized this about a month ago and decided that when it got cold enough outside, I’d do a write up in hopes that it would bring a bit of warmth to our readers in locations that are brick cold right about now.

On a whole, I’m not overly familiar with the soca genre, but I’ve listened to it from time to time. The term “soca” is a shortened form of the term “soul calypso”, which is a form of music that originates in Trinidad and Tobago. In my search for more information, I ended up at the Holy Grail for all things that COULD be true…Wikipedia. I took a look at the section that listed some of the genre’s notable artists and many of them have songs featured on the 2009 edition of “Soca Gold”.

Things start out with the drum and whistle-heavy “Handle Ya Bizniz”, which is performed by Edwin Yearwood. Destra Garcia follows up with “Bacchanal”, and by this time I’m fighting the urge to get my ass up and dance. In general, it’s just something that I don’t really do. I mean, I’m capable of pulling off a decent two-step, but anything beyond that is usually out of the question. If you’ve seen any soca dancing before, then you know how much of a workout it can be. If you haven’t seen any before, then you’re in luck since “Soca Gold 2009” comes with a bonus DVD full of videos and concert footage.

One of the first songs that captured my attention was the Peter Coppin-produced, “Tight”, which is performed by Peter Ram. The same beat pops up again on “Put Some Wine On Me” by Rita Jones and once more on Lil Rick’s “Bashment Winers”. If I sound like I’m complaining here, I’m really not. I have a compilation called “Telephone Tracks” which features one beat (most notably used for “Telephone Love”) that goes on for ten tracks, spanning almost forty minutes.

By the time this compilation comes to a close, I had tapped the hell out of my foot and pencil. A bigger fan of the genre would have worked up a monster sweat. I wouldn’t dare try to rate the lyrical content of this compilation, but the production is sure to send any soca heads into a frenzy for sixty-eight minutes. So, with that said, pop this disc in, turn it up and get your wine on. It’s not a permanent solution for those frigid temperatures, but in the interim, it should help to bring the heat to any situation.