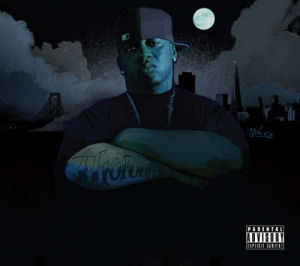 Despite there being over six billion people on the planet, including three hundred mill’ in the United States alone, every hard luck hip-hop story seems the same once you’ve heard them enough. You would think they’d be as unique as the fingerprints and DNA of the people they come from, but the people who write these bios must be cribbing from each other’s notes. Therefore I really can’t tell you anything about DaVinci in this opening paragraph you haven’t heard before – single parent, poor neighborhood, bad influences, running with the wrong crowd, homeless, selling drugs to survive, you name it. His neighborhood may be Fillmore, but his bio is straight outta Any RapperHood, USA. The only ways that DaVinci can distinguish himself are lyrical acumen and musical production and on “The Day the Turf Stood Still,” and he can only take credit for the latter half in that he hopefully would refuse to rap over anything that’s whack.

Thankfully production isn’t really a cause for complain on “The Day the Turf Stood Still.” There’s nothing here that’s going to go down in the annals of hip-hop history for either good or bad reasons, but the beats rise above mediocrity to an at least enjoyable level. In fact despite a different slew of producers being involved over 17 tracks, the music stays consistently listenable and never drops rapidly in quality. “See Another Day” rides Alejandro strings and drums that make DaVinci sound remarkably like The Game, and Myisa does a nice job singing the hook. On “Whiplash” the Al Jieh track and G Koop fingering snap your head nicely to a slow tempo. “Idle Mind” has Big D digging into a big bag of funky breaks and guitar wailing that gives DaVinci the breadth and depth to flow over. And what’s Mr. Any RapperHood, USA rapping about? What else – the criminal life. He’s not glorifying it or acting proud of it though – he’s just telling his hood story.

“I’m Fillmore to the death nigga, I ain’t never turf hopped
I shopped work up out of the devil’s workshop
Cooktop rhymin and quarter ki’s in Hell’s Kitchen
Wishin (what) the man upstairs would listen
That’s when I said FUCK mannin up, I’m blitzin
At some point I knew that I could do somethin different
Even if it meant doin somethin senseless
As long as I’m relentless I could see myself winnin
At age 13 yeah I seen myself sinnin
Dippin into sex drugs and older pretty women
My house burned down in nine-six, we was homeless then
Slept on my auntie flo’ in Oakland where she took us in
Scraped crumbs in pissy tenderloin crevices
Pulled 211’s that’s only described as devilish
Collect checks from, Glide Memorial
So ask if I deserve this, it sounds rhetorical”

In a sense “The Day the Turf Stood Still” is a contradiction both in its title and construction. If DaVinci wasn’t moving, he wouldn’t be where he is right now – a mass produced compact disc and professional press kit that are sitting on my desk. It’s also safe to say that DaVinci is moving forward as an artist, because despite a relatively cookie cutter hard luck rap biography he’s produced a full length album that breaks out of the mold a LITTLE more than a little bit. From the soulful R&B samples and unapologetically blunt lyrics of “Guys Wanna” to the thoughtful and echoing breaks and bars of “Aristocrat,” there’s more to be read in DaVinci’s notebook than the jacket it comes wrapped in would indicate. “Pass the word, DaVinci’s sold his last bird/But I’m still doin numbers like the class nerd.” Perhaps he is. I’m keeping DaVinci on my “artists to keep an ear on” list – he’s got enough moxie and production to keep moving on his turf, rising from the merely above average to something special as long as he doesn’t stand still for too long.