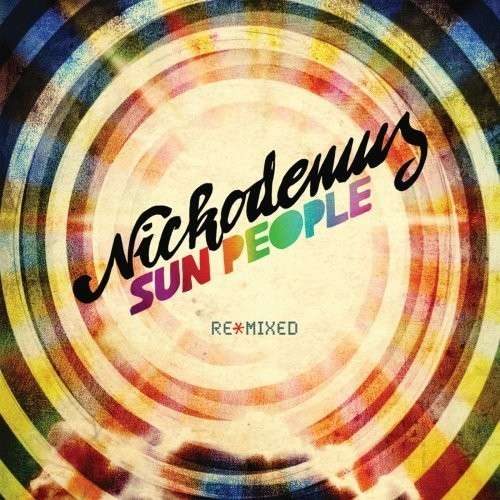 As if I needed another reminder that the summer months are long gone, I looked out my window as the snow from the second blizzard in as many weeks blankets the ground. It’s getting ugly. Luckily, Brooklyn’s own DJ Nickodemus is back with a remix album of his “Sun People” album that promises to “heat up your sound system”, per the press release. The original “Sun People” release was built around the concept of making songs for “people that love the sun, sunshine and brighter days to come”. The press kit goes on to say that the original songs were inspired by “people that Nickodemus has met and places he’s been, along with his collective feelings of optimism”.

I originally planned to get my hands on the original “Sun People” release and see how different it was when juxtaposed with this new “Remixed” edition, but my computer had other ideas and started malfunctioning. Forced to come up with an alternative, after my first listen, I chose to refer to John-Michael Bond’s review of the original album from this past summer. Upon reading JMB’s write up, I noticed that we picked up on some of the same points: 1) This album will not appeal to everyone, 2) It’s not easy to place this music into a readily classifiable genre of hip-hop and 3) The main focus of this album is on the music, and not necessarily the lyrical content. That last point is not to say that the lyrics are sub-par by any means, it’s just a matter of there not being many to go around. Many of the songs feature chants in foreign languages, and some songs don’t have any words at all.

With those points in mind, I gave the album subsequent listens and it seemed to appreciate in listening value each time around. “Remixed” opens with “Sun People” and “Just Move”. The Earthrise Soundsystem remix of the former is filled with various West African chants and instruments. The Pimps of Joytime remix of “Brookarest” features some horns that remind me of old-time New Orleans trumpets. The Red Astaire Rollerskate remix of “Sun Children” features rhymes (yes, rhymes!) from The Real Live Show. J-Boogie’s remix of “Didibina” features Falu, and unless my ears were playing a cruel joke on me, I heard a faint sound of cowbell. Christian Prommer’s remix of “The Love Feeling” combines elements of techno with percussion sounds like maracas. It seems weird in print, but it comes off quite nicely. The album closes out with additional remixes of “Sun Children” and “The Love Feeling”, crafted by Pablo Sanchez and SABO, respectively.

While I didn’t physically warm up, the sounds presented on this remix album did manage to bring thoughts of warmer places to my mind. It’s amazing to see how music can be a vehicle to unite people the world over, and while that’s always been an unspoken mantra of sorts here at RapReviews, it’s nice to see it in practice by others. Although I didn’t understand all the languages used on this release, they were delivered with conviction and passion. “Sun People Remixed” further proves one of my long-held beliefs that music is universal and I’m curious to see what Nickodemus has up his sleeve for his “Moon People” project.