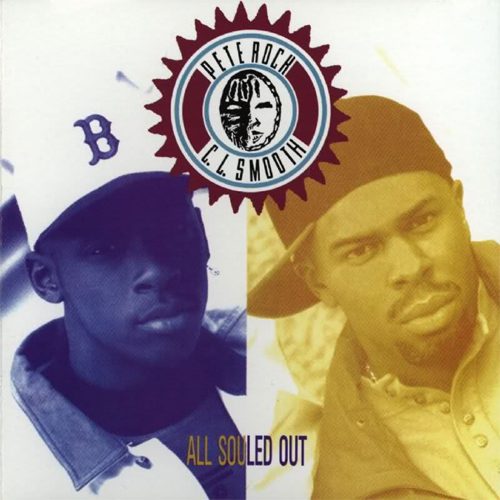 In an apparent quest to sign East Coast rap acts of both artistic and commercial merit in the early ’90s, Elektra Records stumbled upon a certain Mount Vernon producer/MC duo named Pete Rock & C.L. Smooth. The resulting debut EP “All Souled Out” arrived in 1991 with six tracks and nearly a half-hour of majestic music, setting the stage for their monumental albeit short tenure together as a duo.

The beats on “All Souled Out” are technically impeccable, but they also contain that inimitable element of soulfulness and expressiveness that makes Pete Rock arguably the world’s best producer. Hip Hop’s detractors have always pointed to sampling as a lazy, thieving practice of creating new music, and although Pete’s a heavy sampler, it’s hard to imagine those critics having a problem with his methods. For one thing, his knowledge of soul and funk music is so vast and deep that many of his samples are beyond obscure. For those samples that are a little more well-known, he flips them on his trusty SP-1200 in such a manner that they’re hardly recognizable, not so much disguising them as breathing new life into them and finding expressive potential that the original artist probably didn’t even intend. His rich arrangements have many layers but never feel cluttered, and he always seems to find exactly the right balance.

Pete became famous, of course, for his use of horns. Other producers had used jazzy horn samples before, but more often than not they were the type of choppy, floating horn chimes that could easily be packed into concise loops. Pete’s horn arrangements are thick, long-winded, and have a personal touch to them. Sometimes, they sound distant and mysterious, seeming to alternately move toward and then away from the listener, but most of the time they’re still bright and cheerful. But it’s not just horns here – “All Sound Out” is home to a wide range of instrumentation including flutes, vocal samples, and sound bites I don’t even know how to classify. His clever, sturdy basslines are never disproportionate, and his drum patterns are creative but not overpowering, often incorporating such unorthodox elements as sleighbells.

Pete’s early beats are transcendent in this way – they seem to hearken back to an indistinct time and place created by the combination of sounds from such an array of sources. In reality, this faraway utopian place might be none other than Pete’s own “bassment” which houses his colossal record collection and from which he selects the most evocative sounds from across time and around the world to put to wax. It’s easy to credit Pete’s brilliance on his records with C.L. Smooth to so many factors – his young enthusiasm, a largely receptive audience, the hip hop renaissance in which he so prolifically participated – that in my opinion, the most critical factor seems to be overlooked: C.L. Smooth himself.

C.L. often seems to be shortchanged in the praise of the duo’s albums; although he’s not the master of his craft that his partner-in-crime is, he possesses an unusual combination of style, attitude, soul, and insight. As his stage name suggests, few MCs are smoother than Corey Penn, and his easy yet commanding delivery is as enticing as it is relaxing. A poetic lyricist and clever writer, his greatest strength might be in his rare ability to set a mood, or at least to match and expand upon the one Pete creates. C.L. evokes settings and situations, even fictional ones, like few others, and the contemplative, thoughtful nature of his verses enhances the singular realm of his lyrics. C.L.’s a righteous brother, but not preachy, and when he’s on the socially conscious tip tends to present scenarios as he perceives them without hitting the listener over the head with them. The duo’s chemistry was remarkable, and seems even more so when looking back fifteen years after they parted ways. C.L. seemed to know exactly when to tone down his substance and just let the beats do the talking – on some of the duo’s most popular songs, C.L. doesn’t rap about much at all but provides well-vocalized, artistically arranged verses. When other MCs rap on Pete’s beats, one of two things tends to happen: they either struggle to wrestle the spotlight from the music, or they put so much effort into making a verse that stands alone that it doesn’t mesh well. When C.L. rapped on Pete’s beats, it was as much an equal partnership as could be had on a Pete Rock track.

In lieu of vocal hooks, the songs use catchy instrumental samples looped between verses, usually as C.L. repeats his last line. This lends a contemplative air to the songs, allowing the listener to consider the substantial verse that preceded in anticipation of the next.

The contagious head-nodding begins seconds into the intro of “The Good Life,” as the music builds from a sparse breakbeat to a lush arrangement with a funky bassline and tasteful trumpet sample. Over three verses, C.L. presents an interesting analysis of societal perceptions of “the good life”: material wealth, mental stimulation, familial responsibility, expectations of others, but most of all, the eternal pursuit of success, even in light of tough circumstances:

“Some live the good life, loungin’ by the pool
Catching a suntan, and everything’s cool
Male or female, you want to be set
In the big mansion drinking Moet
You read the Wall Street Journal, later for the comic
Far from dumb because you practice logic
You lived poor in the ghetto, never had the money easily
But, you found the remedy
So, you, your girl, and your kids could have a better opportunity
And teach them all about unity
Cultivate in the brains the words of Allah the master
And they go far
But, you still go visit your old stomping ground
Indeed to help another that’s down
A tough situation cuts like a knife
In search of the good life”

Pete chops up the track with a series of complex scratches and samples. The album closes with the “Group Home Mix” of the same track, which replaces the original beat with a swirling, uneasy backdrop and trombone-laden chorus.

“Mecca and the Soul Brother” is a busy six-minute gem that’s pure dopeness all the way through. The best track, however, might in fact be “Go With the Flow,” with its absolutely killer flute line. The flute instrumentation is deep and smooth, but the more frenetic drums lifted from James Brown’s “Funky Drummer” provide a steady balance to the track.

“The Creator” is Pete’s solo track, beginning a practice that would continue on each of the duo’s recordings. On every Pete Rock & C.L. Smooth record, Pete has one track to himself for him to flex his deep, sleepy delivery and get busy over more rugged beats. “The Creator” is simple in concept, with a fat, rumbling bassline and head-spinning horn sample on the hook as Pete raps about his proficiency with the ladies and his skills on the boards. We all know that Pete isn’t a great rapper, but he’s not quite as bad as many like to make him out; his biggest problem lies in that he doesn’t ever have much to say. Still, his laidback voice meshes well with the funky beat on “The Creator,” and it’s another highlight. Pete’s solo tracks aren’t meant to compete with C.L.’s in terms of lyrics, and their effect is wholly different. I tend to consider them as light-hearted intermissions between C.L.’s heavier compositions.

Like their catalog itself, “All Souled Out” is a flawless listen that no doubt had listeners salivating for more in 1991. Even as they would go on to release two of the finest LPs the East Coast would ever see, “All Souled Out” stands alone as their earliest masterpiece, not so much a teaser or preview as a brilliant prelude to further magnificence. What’s scariest, though, is that the two would only grow better with time: C.L. perfected his increasingly-complex rhyme schemes in the years that followed, and Pete’s beats became more intricate and expansive. Perhaps a little funkier and less mellow than either of their LPs, they would also develop a polish and focus as they grew together. Pete would, of course, go on to establish himself as one of the most visionary and influential beatsmiths in hip hop music, but the Pete Rock & C.L. Smooth catalog still seems to be on a plateau all its own. Pete and C.L. shared talent, chemistry, and most of all a musical vision that few duos before or since could claim, and in such were one of rap’s greatest, if short-lived, pairs.