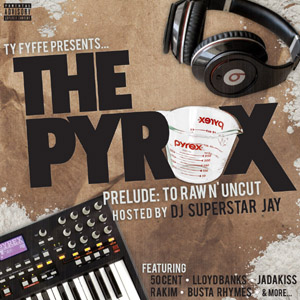 While not associated with any particular camp and also working with non-East Coast artists (Xzibit, Bone Thugs-N-Harmony), his roots in Queens, NY are reflected by more frequent collaborations with L.L., 50, and Ja. Not content with being involved in ‘over sixteen platinum selling albums’ (by his account), Ty Fyffe now steps into the spotlight of the mixtape circuit. The free “The Pyrex” compiles some of his more recent productions and acts as a prelude to “Raw N’ Uncut,” a project that offers newcomers the opportunity to end up on a Kay Slay-hosted full-length full of Ty Fyffe beats.

Underlining the producer’s ambitions, host DJ Superstar Jay dubs Fyffe “the future” in the intro, before the proceedings kick off with “Get the Money.” Sampling an appropriate Prodigy quote (“Queens get the money”) and employing sharp bass and piano shuffles, the track is on the offense like so many beats favored by the likes of Lloyd Banks and 50 Cent. But its featured Queens rappers you might have last heard in the ’90s – Mic Geronimo and Royal Flush. They profess that “whether it’s the streets or the studio – we make hits,” and “Get the Money” proves that the potential at least is there. Queens continues to be represented on “Green Day” through Lloyd Banks, Havoc, and Cormega, who ride a beat accentuated by moody organs and meditative guitars. Not surprisingly, Mega earns the quotable:

“I came home from state greens with plans to make green
Did dirt, for what it’s worth now I stay clean
Niggas hate but it don’t make or break me
My daughter wore Bathing Ape since the age 3
My city never sleeps, so I have to daydream
If Big never died, who the fuck would claim king?”

Potential contenders for at least some sort of crown can be heard on “Euphoria,” which is likely that online bonus track that came with the purchase of Rakim’s “The Seventh Seal.” The line-up is a bit arbitrary, but it’s still good to hear the legend lead fellow NY mainstays Styles P, Jadakiss, and Busta Rhymes:

“Euphoria”‘s tilted key and bass stabs do get repetitive and are in stark contrast to the cinematic “The Invitation” off “Before I Self Destruct.” “I See You” wouldn’t have been all that out of place on Snoop Dogg’s latest with its synth pop swooshes, but it wouldn’t have been a particularly worthy addition either. “Dancin'” with Hoodfellas is an unabashed disco adaption like it was ’97 all over again. “Puttin’ Work In” had the distinction of opening up “We Mean Business” but despite the vaguely sharp/bouncy background it never was EPMD material. “Be Me” may also be out of character for Lil Wayne, but his possibilities are far less limited, and so he takes on the bluesy track with the appropriate mindframe. The mixtape comes back around to Queens with the pedestrian crime joint “Come Out” for Tony Yayo, Nice, and Prodigy; the solid, Juice Crew-inspired “SouthSide Symphony” featuring upstarts Frenchie, Deezie the General, Louis V, and Lexx 9Eleven; and the laid-back, rich-sounding “The Pyrex/Smells Like ’95” with Fokis and Havoc.

As a showcase for Ty Fyffe, “The Pyrex” makes it obvious that the producer prefers versatility over a trademark sound. Despite this attempt to boost his profile, he’s likely not ready to trade in his longevity for fifteen minutes of fame. Still, tackling the business from various angles, he owns and operates a studio in Hempstead and acts as president of TYBU Productions, ‘a full service production company which provides production for various genres including hip-hop, R&B, pop, rock and more.’ He seems to have a momentum right now, announcing to have contributed to Drake’s upcoming “Thank Me Later” album, which is nice for a producer whose name would get misspelled in the credits. Nevertheless, Ty Fyffe is still at least a couple of bangers away from legendary status.