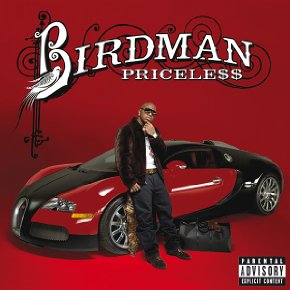 Bryan Williams has been going by the name Birdman long enough that we can probably drop referring to him as Baby at this point. Honestly it was a bad nom de plume and even worse as a nickname – it implied that what Williams had to say on wax was childish and immature. That’s fair though – a lot of what Williams had to say WAS. With marginal talent at best as a lyricist, Williams relied on catchphrases and funny noises to carry himself as a soloist when his real best fit in the rap game was (and always has been) as the entrepreneur and architect of Cash Money Records. Despite a lack of accolades for his rapping ability, Birdman has been a sales success for three reasons: well produced singles, a VERY tight relationship with Lil Wayne, and no shortage of TV and radio exposure for his singles. Since he’s still releasing solo albums over 7 years after the first one dropped, you have to give him a modicum of respect and props as a soloist.

That being said it hardly comes as a surprise on “Priceless” that Birdman’s best songs are the ones that feature Drake, Lil Wayne, or both. Few self-started record labels are lucky enough to have one mainstream superstar, and with Drake it’s clear that Mr. Williams is on the verge of having two. While the label and it’s affiliated imprint Young Money work carefully to not overexpose the budding star while simultaneously cashing in (no pun) on his popularity, they’ve achieved that balance quite successfully on “Priceless.” Out of 13 tracks Drake appears on only three, including the hit single “Money to Blow.”

“I am on a twenty-fo’ hour, champagne diet
Spillin while I’m sippin, I encourage you to try it
I’m prol’ly just sayin that ’cause I don’t have to buy it
The club owner supply it, boy I’m on that fly shit
I am, what everybody in my past, don’t want me to be
Guess what? I made it!
I’m the muh’fuckin man, I just want you to see
Come take a look, get a load of this nigga
Quit frontin on me, don’t come around
and try come gas me up, I like runnin on E”

Even though he gets in where he fits in perfectly with Baby and Wayne here, he nearly gets shoved out of the limelight on “Mo Milly” by Bun B – but to be fair he hangs in there better than Birdman – his contribution to the song was nil nilly. The Port Arthur superstar’s swagger is undeniable, and even though we all still miss Pimp C (R.I.P.) Bun’s future continues to be as bright as Birdman’s jewelry.

“Well it’s that big-bodied nigga in his big body car
Got a big body bopper with that million dollar jaw
She said ‘Daddy I like sushi, so give it to me raw’
I pulled out my strap condom, looked at it and said NAW
Cigar full of kush you need prescriptions to access
Layin on a mattress, wit’cha favorite actress
My blunt was goin out, I said baby pass the matches
and let her top me off, while I’m tappin off the ashes”

If any artist is over-exposed on Birdman’s album it’s Young Weezy. While it’s safe to say that without his musical and lyrical contributions Birdman would struggle to have enough content for an album, it would have been more accurate to bill this as a co-authored album as they did on “Like Father, Like Son.” Since he’s on almost 50% of the songs, it makes it that much more noticeable when Wayne seems to be phoning it in a bit on songs like the title track “Priceless,” although he clearly comes to life when Kevin Rudolf produces and guest stars on the banger “I Want it All.”

“Uhh, I want the world
You want the pussy, I want the pearl
I want the life, I want tonight
My fruits of labor, I want ’em right
That’s right, private flight
Money gets stacked to the highest height
Better get your map and signage right
But I want the drama – Guiding Light”

If you’ve noticed that we haven’t quoted from Birdman’s lyrics once in this review, that’s not a coincidence. The songs where Williams are flowing solo are best skipped, with the possible exception of “Shinin” featuring T-Pain’s unique vocal modulations. So long as he has Young Money co-stars like Gudda, Lil Wayne and Mack Maine to help him out he’s fine – without them he’s monotonous and unimaginative but COMPETENT. That’s the key to “Priceless” here – while Birdman continues to be marginally better than average as an emcee he (normally) doesn’t say anything so absurd or bad you have to put the headphones down and quit listening. It’s hard to believe Williams will ever exceed this level as he’s already 41 and not getting any younger, but so long as he continues to get excellent production from the likes of Drumma Boy and Boy-1da and get his younger and more talented rappers on songs with him, Birdman’s solo albums will continue to be interesting. They’re not “Priceless,” but they’re not awful.