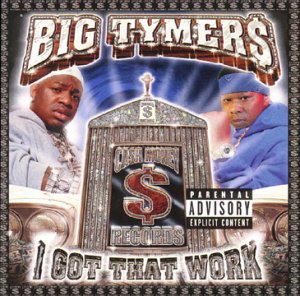 Big Tymers :: I Got That Work

You may or may not know Mannie Fresh as a rapper, but you definitely know him as a producer. The signature sound of every top ten Cash Money Records hit from “Bling Bling” to “Ha” to “Tha Block is Hot” has been graced by his magic touch. Even if you aren’t a fan of the themes prevalent to their Dirty South rap style (bitches, drugs, money and thugs) it’s hard to argue with how the beats make your trunk rattle or your headphones pop.

The Big Tymers are an accident of this production, a by-product of the days when Cash Money was still a Small Tymin record label. When Cash Money ran out of artists to record and still had bangin beats left over they collectively decided to put Mannie Fresh and label co-owner Bryan ‘Baby’ Williams together as a rap group. For this reason alone, honesty would force one to say that Baby and Fresh are not the CREAM of the crop when it comes to rap talent; as they are easily outshine on the guest appearances by B.G., Lil’ Wayne, Juvenile and Turk. Then again in all fairness Fresh and Baby are certainly NOT the worst executives or producers to ever grab a microphone. In fact, they easily put Puff Daddy and Jermaine Dupri to shame.

The lead single “Get Your Roll On” is a good example of how Fresh works as both rapper AND producer. For those who continue to dismiss the complexity of rap music, just listen to the track and try to pick apart the layers of sound Fresh stacked one on top of the other. The stuttering drums, tinkling pianos, electronica +bounce+ sounds, and vocal “oooooooooohs” are just a few of the many elements working in concert as well as any symphonic orchestra could. Furthermore, Fresh doesn’t try to overpower his sonic masterpiece with his rap – in fact his simplistic ONE.. WORD.. RAP.. STYLE.. is the perfect compliment to the musical production and so catchy it will undoubtedly be bitten by scores of imitators. Baby uses the style as well but actually seems a little restrained by it whereas Mannie’s rap is truly “laying in the cut” and comfortable with the beat.

The catchy production continues on the Lil’ Wayne blessed “Nigga Couldn’t Know” (with an outro so good it makes you wish he’d re-loop it for Run-D.M.C.) as well as when he provides the hook to the humerous and heavy “No, No.” This reviewer honestly wishes would be the next single, although it could easily be “Hard Life”, which features Wayne along with Juvenile. Again the raps end up being secondary to the beats – intentionally or otherwise. The horn section, timpani drums, and grooving guitar are so smooth together you could enjoy the instrumental just as much.

Length may be the only downfall of this album. After 18 tracks (15 full songs) the topic matter begins to wear on their engine and you desperately wish for an oil change and lube job. There’s only so many ways you can talk about getting paid, busting caps, and watching your back. “We Hustle” and “Pimp On” are severely handicapped by this repetitive formula; although the album’s closing is saved by the misogynistic but catchy “Rocky (Balboa)” and “Snake” (yes, it’s about HAVING a Big Willie, not just being one). Feminists will undoubtedly find it as crude as this reviewer does, but nobody ever said music had to be socially concious or morally uplifting.

Basically, if you don’t concentrate too much on the raps, the Big Tymers have put together a much better than average album. It’s not really quotable or memorable lyrically but it’s good music to drive to and good music to dance to. Mannie Fresh more than anyone should be applauded for that; because after listening to this album one feels he could polish even the rawest lumps of coal into nuttin but diamonds.

Big Tymers :: I Got That Work
8Overall Score
Music10
Lyrics6