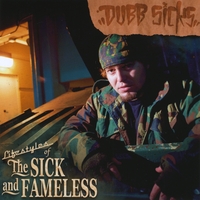 Dubb Sicks :: Lifestyles of the Sick and Fameless

When we think of Texas, we think of Cadillac driving oil rich millionaires like those seen in the 80s show “Dallas” or perhaps men wearing 10 gallon hats that drive pick-up trucks with gun racks. Apparently, there is much more beyond the typical Texan stereotype that has yet to be unveiled. Dubb Sicks lives and breathes the Texas, but instead of maintaining the conventional label, he instead claims to be “basically a rock star that spits sick over beats” who makes downright grimy music. Originally from Odessa, but now Austin bound, Dubb Sicks has made a name for himself since his last album “Mind in the Gutter” while being featured in the 2009 SXSW festival and touring via Greyhound across the U.S. His uncanny storytelling abilities combined with his lewd, outspoken lyricism has shaped his character through the years and comes to life once again in his latest installment of “Lifestyles of the Sick and Fameless.”

Similar to “Mind in the Gutter,” Dubb Sicks jumps from one spectrum to the other, incorporating tracks both serious and eccentric. Sicks starts off solid with the funk driven “Not so Very Far from Home” as he describes his life as an emcee on tour while “crossing state lines to get on stage.” Paying homage to Odessa, the city where he grew up, “In My Heart” sports a fresh beat with plucked strings and mesmerizing wailing. It’s obvious that Sicks takes pride his city even with its enjoyable and bad qualities.

Sicks gets some help with vocals and rhymes from Stephanie Salvo in “Hard to Breathe” as they touch upon the difficulties of internal struggle and battles within as he says:

“Put on my shoes one foot at a time now
Doubt creeps up and tries to choke me from behind now
I don’t got the time now to be tied down
Straight jacket tied down
About to lose my fuckin’ mind now…
That’s the never ending question
What’s my purpose?
Get nervous, call the nurses
Suicide in my verses
Control your breath man
Steady your fuckin’ hand
I’m married to the struggle and death is my best man”

Sicks gets some more assistance from Def Jukie C-Rayz Walz in “Madd Deep” with its piano keys and horns. As they touch upon the idea of being careful when trusting others because people let you down so often it’s clear that both their styles of lyricism complement each other well. “”War Outside” featuring Foog and Mumble Skinny shows how there are so many unresolved issues in the more seedy parts of Texas and are taken over by illiteracy, crime, violence, and drugs.

“Lifestyles of the Sick and Fameless” started out on a good note as Sicks touched upon some deep topics and definitely showed a more introspective side of him, but of course, his album wouldn’t be complete without his typical antics and craziness. A perfect example comes through in “My Girlfriend Hates It” and as we finish the lyrics, we come to realize she hates that he “kicks it at the strip club.” Yes, you guessed right; two and half minutes devoted to strippers, stripper poles, and six inch high heels. I was over it two and half minutes ago. “I’m so Fucked Up” is another nonsensical track to fill in some time as he professes his joy of drinking and partying.

Only Sicks would do a track based on a fictional emcee superhero obviously named “Rapstar the Superhero.” Sicks describes him coming from outer space with baggy jeans, chain, shell toes, and a grill with mic in hand to “save the world over those beats.” Apparently, this superhero drinks a 40 or Cristal, and drives Impalas or Cadillacs, too. Sicks creativity shines in this track as he shows how his superhero uses radio waves to manipulate thoughts and of course he gets paid with royalty checks. This was definitely clever and sure got a laugh out of me.

It’s only Sicks character to throw in some comical tracks with the more serious ones and in the end, it keeps his audience entertained. However, after hearing the first half of the album, I was excited to hear more, but then “Lifestyles of the Sick and Fameless” began to fall short with senseless “filler” tracks. I just wish the momentum had continued which would have made for a superb album. I’ll give it to Sicks for keeping it lighthearted and humorous as tracks such as “Rapstar the Superhero” took it to another level of amusement. In any case, Dubb Sicks’ skills are unquestionable as it is clear his loyalty to his music and hometown are completely genuine and unsurpassed.