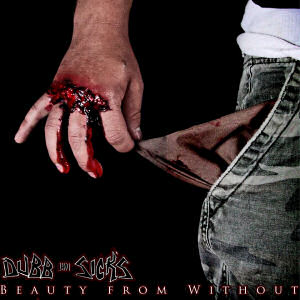 Dubb Sicks :: Beauty From Without

Dubb Sicks is a self-described “Odessa legend and Austin rap veteran” who has had two previous albums reviewed on this website: “Mind in the Gutter” in 2008 and “Lifestyles of the Sick and Fameless” in 2010. The former got surprisingly high marks for a newcomer, the latter leveled his average a bit but still got a positive write-up from Susan Kim. “(His) skills are unquestionable as it is clear his loyalty to his music and hometown are completely genuine and unsurpassed.” So if you don’t know anything else about Dubb Sicks before starting this review know this – he’s Texas to the core and proud as hell to represent Odessa and Austin in the world of hip-hop.

“Pick up my head, off the motherfuckin pillowcase
Hungover mouth, got that High Life Miller taste
Gutter shit, I facilitate, just for realness sake
I’ma eat ’til I’m fucked one night, like a dinner date
Here I am, back again, actin how I act again
On Fridays I black out like the stock market crashed again
Demolition derby driver, parking lot I’m backin in
No seatbelt, no air bag, cause I’m wreckin on the track again”

Most of the Dubb Sicks videos you can find on YouTube feature him taking part in the Texas Battle League, but on “Beauty From Without” he’s not throwing down challenges or calling out other emcees. The ten songs and 37 minutes of this album could be subtitled “The Further Adventures of Dubb Sicks,” because the focus on his album is largely to narrate his own adventures in the first person. While some rappers try to keep a healthy distance between what they rap and claiming they actually do it, Dubb leaves the distinct impression each song is a personal experience he chooses to share with the listener via his rhymes, such as the song “Where Were You the Night 6th St. Blacked Out”:

“Where was I? I was sittin there front and center
Right where the goons be, cup full of liquor
Light flicker, shut ’em down, pitch black all around
Credit card machine went down, I bought another round
Loud and obnoxious, cop lights and sirens the sounds
Bitches runnin in they high heels, drunk fallin down
I move with the gutter crowd, hands up, move around
Now everybody scream like the power went out!”

Von Smear’s production brings an electricity to Dubb’s blackout flow on the track that makes the two feel tailor made for each other. Dubb benefits from above average production throughout this short album, from the horrorcore meets dubstep vibe for “Freedom From a Shotgun Blast” to the laid back country feel of “Head in the Hoopty” and eerily Just Blaze-esque sound of “Searching For Greatness,” though it’s S. Killz who laces the beat along with 2 more of the album’s final 4. Among them is the album’s current single “I’m Gowne” featuring Cory Kendrix and Rittz.

Dubb Sicks has an inherent confidence and brashness to his flow which lends itself well to his presentation, making him stand out from similar emcees in Texas or elsewhere in the country. That doesn’t necessarily apply to his guests though, and in particular Japanese Jesus drags down “Grown Man Ish” with his line “I’m Ric Flair before the plane crash.” As someone who both enjoys and covers the sports entertainment world I have a problem with this being a brag line, since it’s well accepted Ric Flair was a better wrestler AFTER the plane crash. In fact Flair has often said in interviews that crash was what made him decide life was short and his only choice was to live it to the fullest. That might make him Dubb Sicks mentor, whose only concerns seem to be how drunk he can be and how many blowjobs he can get. Dubb might not get praise for being profound, but as a party music rapper, he’s got enough to get the job done.