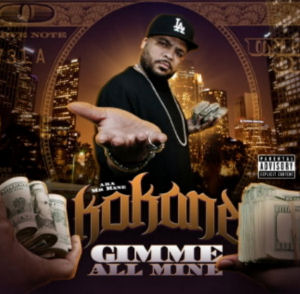 That’s the voice of experience speaking – a wisened music industry O.G. – so all young players out there take note and heed the word of Jerry Long Jr. Doesn’t ring a bell? Perhaps you’d know him better as Kokane, the self-professed expert on making “Addictive Hip Hop Muzick.” A bold title to be sure but one he earned as a rap star during the original heyday of Ruthless Record. As cousin to Above the Law founder Cold 187um he could have easily just slid in by nepotism and held down a spot, but Mr. Kane was not interested in taking it easy. He dropped his own albums, he contributed lyrically to Above the Law and to other projects, and made a name for himself as one of the auteurs of the rise of West coast gangster rap. Early success was squandered though as Kokane was on hard times by the end of the 1990’s, working in the porn industry to make ends meet, until the aforementioned Snoop Dogg gave him a second career where he became as well known for crooning hooks as he had for his gangster lyrics.

Unfortunately the second rise also led to a second fall, as the Pomona native and Snoop parted ways, and a few solo albums in the last decade came and went with barely a blip registering on the radar. Now in his 40’s, he’s set to make a THIRD comeback on “Gimme All Mine.” While it’s a braggadocious title that makes you expect him to come out calling shots and starting wars, the truth is that he’s a war-weary veteran tired of meaningless babble and senseless violence. Kokane believes it’s time for a change, and he vows on his new album to be remembered as a rapper who “Made a Difference”:

“Extra, extra, said these dudes got issues
What’chu lookin mad fo’ when I say God bless you?
I come from Pomona, home of the Blood, Crip and pimpin
Strivin to graduate past the hood to higher livin
Now I would never have my kids, live how I lived
In a broken up home, 24-7 daddy’s gone
Sacrifices, that must be met
What type of father have his own son throw up the set?
So vicious, as the cycle continues
We at the dinner table orderin from the devil’s menu
Too many pretenders, with hidden agendas
But I’m on yo’ back bumper like a broken fender”

Kokane might sound preachy in print, but with a vocal box that has a couple dozen Cuban cigars stuffed in it, he’s a gruff yet somber voice speaking truth that he readily admits the cynical and skeptical might not want to hear. The backing music should help though, as “Made a Difference” has a soulful hip-hop R&B backdrop with strong drums, funky horns and a wailing G-funk whine just barely noticeable in the background. Production is strong throughout “Gimme All Mine” as many hands are on deck to produce the CD including Tha Chill (“Twilight Zone”), Above the Law (“Lay You Down”) and Seattle producer Vitamin D among others.

Some tracks on “Gimme All Mine” like “Sleepin’ in My Bed” have a very old school Parliament-Funkdadelic feel, while others like “Rollin’ Up on Hoez” are the kind of minimalistic finger-snapping rap the New Boyz made so famous. Still there’s no question what Kokane excels at – FUNK. He croons his way through “Baptized In Tha Funk” and you could mistake him for the Atomic Dog himself George Clinton. As politically incorrect as the line “Don’t make me go Chris Brown on a hoe” is, I have to admit I laughed. While he doesn’t want people to forget he’s an alpha male throughout these twelve tracks, there are plenty of thoughtful songs where he reflects on life and spirituality that don’t feel forced or seem out of place, songs like “Can a Thug Get to Heaven.”

“Sometimes life, just don’t treat you fair
If I had it my way, I would be a zillionaire
But you can’t say, I woulda made a big grip
before I had kids and a wife, cain’t put a price on life
Thank you ‘Licia, I love you and the kids so much
Havin a family, got me out the devil’s clutch
Thank you God, for givin me my breath
Raised around filth, coulda died a cradle death
He carried me for years when I didn’t understand
Before I became a man, footsteps in the sand
Can a thug go to heaven? That’s the question
Can’t take the money with him or the murder weapon
Can’t take the hoes, weed… only the blessing
Get right with the Lord, start confessin”

Kokane manages to walk a fine line between thumping you over the head with a Bible and being true to his gangster rap fans, and it honestly feels like he doesn’t trip over it at any time. While this may not be a revolutionary album or bring the West coast back to prominence, Kokane himself is wise enough to not expect it to and reminds his contemporaries on the lead single “Twilight Zone” not to wait around while the South is blowing up in hip-hop. His advice – work hard, make good music, and the people will listen. On “Gimme All Mine” I’m definitely listening.