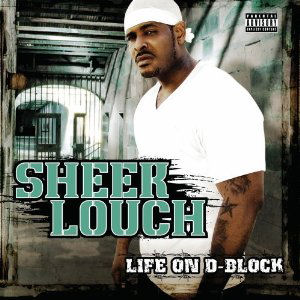 Here at RapReviews, we find ourselves covering a lot of albums. Every now and then, a few will fall through the cracks until most have seemingly forgotten about them. Such is the case with this album. Chances are, if you’re on this website, then you’ve at least heard of The Lox. The group is comprised of Jadakiss, Styles P and Sheek Louch. At one point in time they were on Bad Boy Records, but ended up jumping ship to the Ruff Ryders imprint after an ugly “Let The Lox Go” campaign. They went on to release one more official album as a group before branching out and releasing their respective solo efforts. Jadakiss is without question the most popular member of the trio. Styles also has a cult following of his own, but where does Sheek fit into the equation? For many, they merely see Sheek as “the other guy”, but he’s the business brain behind D-Block and even has his own legion of devoted fans. He’s released four albums to date, including last year’s “Life On D-Block”.

After a brief intro, “LODB” gets underway with “It’s On” and from the jump, Sheek makes it known that he has the heavy artillery ready and won’t hesitate to “let the Silverback out his cage”. The album’s title track follows the same formula, with Louch spitting lines like “I’ll leave you leakin’ like a college Budweiser keg”. Prior to “Give That Up”, a short clip from “Menace II Society” is played. To be specific, it’s the scene where Caine robs the guy in the drive-thru and even makes him order a double burger with cheese. The song finds Sheek demanding his respect as a veteran in the game. “Time 2 Get Paid” is as close to commercial as the album gets. The beat is bouncy, but not overly pop-ish in nature. My view on the song is further solidified by the fact that a clean version is included as a bonus track.

A clip from yet another Hughes Brothers film, this time “American Pimp”, is used to preface “Pimp Shit” which apparently includes clocking “money like Russell” and sitting in a Cadillac that leans to the side. Those old enough to remember the Oran “Juice” Jones hit, “The Rain” will appreciate the reference to the song and Sheek’s brief singing on “In The Rain”. Louch gets a bit nostalgic on “My Guns Go” hitting on “parties with BIG” and “the publishing with Puff”. By comparison, Sheek is a lot more calm about these things nowadays. He attributes it to being grown now. Speaking of Biggie, there are a handful of references to his lines and in some cases even direct sampling of his vocals. On “The Boyz From NY”, a line from B-I’s “Ten Crack Commandments” is reworked to make a hook, as Sheek raps:

“I don’t care who you came with, or what they did
Who they shot, who they stabbed or how long they bid (was)
I’ll put the boxcutter right to your vein
I’m a menace in these streets, muthafucka… O-Dog and Caine
I’m hip-hop, I still tag up on the train
And I keep an axe, and I don’t mean a guitar like Wayne
This goes out to those that try to use
disrespectful views on them boys from NY”

“Not Livin’ It” starts off with a “baby bay-bay” and “fuck all you hoes”. The song itself takes aim at all of those who profusely talk about a lifestyle that they do not live. Things come to a close with a short outro entitled “Die Slow” and the aforementioned clean version of “Time 2 Get Paid”. For an album that was released almost a year ago (which in turn means that it was recorded even longer ago), it doesn’t really show its age. I attribute this to two major factors, the first being that the entire album was in the hands of one producer, Cozmo and secondly, Sheek doesn’t try to overload the album with features. Opting to keep the guest list short and sweet streamlines the album (it only clocks in at 43 minutes) and doesn’t bombard the listener with too much at once. In any case, I’m not sure how we wound up missing this release, but if this is indicative of what we can continue to expect from the Silverback Gorilla, I’m sure we won’t miss it the next time around.