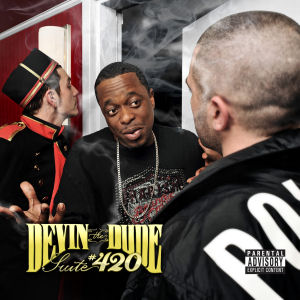 A little more than a year ago, while waiting to make my RapReviews debut, I continued to post reviews on my personal website to try and keep my skills sharp. While the jury is still out on that, one of those albums was 2008’s “Landing Gear”. The introduction that I wrote went a little something like this: “To the untrained ear, Devin Copeland may only be all about pussy, weed and alcohol, much like the 5th Ward Boyz song of the same name which he sang the hook on. While it’s no secret that Devin loves to fuck, smoke and drink, his music goes beyond that. He also touches on heartbreak and often makes songs that are quite inspirational”

I went on to say that “Landing Gear” was no different, and this time around I’m saying it once again. “Suite #420” retains the same characteristics. On “Landing Gear” the album was devoid of any of Devin’s humorous skits. This was probably partially due to the fact that some felt as if “Waitin’ to Inhale” had TOO many skits on it. With “Suite #420”, Devin seems to find the middle ground. He opens the album with the hilarious “Cultural Coughee” which features The Dude and his various characters that his fans have gotten several laughs from over the years.

The Dude’s sixth solo album (seventh, if you include the “Hi-Life” album that Rap-A-Lot Records dropped on the same day as “Landing Gear”) features the Odd Squad, Smit D, 14K, Tony Mac, Ced-B, Cory-B, School-Boy and Alpha-Bet-D. In addition to production from Devin himself, sounds are provided by the likes of Mirawge & Big Baby, Mike Dean, Rob Quest, C-Ray, Luster Baker, Q-Stone and Reggie Coby.

Following the introductory skit, things kick off with the Q-Stone-produced “We Get High” which features the other two members of the Odd Squad collective, Jugg Mugg and Rob Quest. It seems as if from jump, Devin is out to let the listeners know that not much has changed with him…and luckily, that’s just what the fans want. While Devin tries to live a rather pedestrian lifestyle, the fact still stands that he is a celebrity. This can often get in the way when The Dude simply wants to have a good time. He’s steadily bombarded by those who want to pitch him ideas and demo tapes. This is the case on “Pick My Brain”, as Devin raps:

“Aww mayne, muthafuckas think I’ve changed
I’m just tryna chill, that ain’t why I came
Now I got these niggas tryna pick my brain
And a couple a bitches wanna lick my thang
[…]
Nigga, please hit the weed and chill for a sec
What’s the chances of you gettin’ a deal before I jet?
With all due respect, I understand your hustle
But I’m tryin’ to get one of these hoes to hug my love muscle”

“That Ain’t Cool” finds Devin in a few compromising situations that would not bode well for him if his woman happened to find out about them. This includes woman leaving behind lipstick-stained glasses, hair in the sink and tampons in the trash. “I Got A Hoe” showcases some heavy bass and features Smit D and Jugg Mugg with Tony Mac crooning the hook. The first single from the album is the Reggie Coby-produced “What I Be On”. Here, Devin employs his tried and true not-quite-singing form of flowing that he has perfected over the years to explain just what he IS on. To the surprise of some, it’s not all Budweiser and Mary Jane, as the hook goes:

“I be gettin’ by, I be stayin’ focused
I be gettin’ high, I hardly get noticed
I be on my grind, I be on my hustle y’all
I stay on my P’s and Q’s
My weed and brew”

From the title, one might think that the Luster Baker-produced, “Ultimate High” would be a song about getting stoned for hours, but in fact it only mentions weed a handful of times. The song is actually about getting up and getting out to accomplish goals. It’s songs like this one that set Devin apart from many other weed enthusiast emcees, as he raps:

“It’s a challenge to keep your balance, so its cool to be straight
Forwards, ’cause your sons and daughters need some food on their plates
Makin’ it home from an honest day’s work, gettin hugs
Is like an ultimate high that you can not get with no drugs
But refer to reefer when it’s time to chill
Makes my body rest, yes, get my mind out of here
For awhile, I even smile when I don’t feel good
Thinkin’ that will change things, but shit, it’s not understood
Hide behind the weed, and it seems to keep me calm
Keep me covered like the bushes and the trees in Vietnam”

“I Can’t Handle It” has a heavy R&B sound to it, courtesy of Mike Dean, and showcases Devin’s crooning ability as he pleads with a former lover to take him back or to at least not let his “dick go to waste”. The formula repeats itself on “Where Ya At?”, but The Dude hands off singing duties to Tony Mac on “It’s On You”. New Mexico transplants 14K supply the verses on “People Talkin” while Devin simply provides the hook.

School-Boy and Alpha-Bet-D are featured on one of the album’s standout tracks, “All You Need”. The track bears a heavy resemblance to Maze featuring Frankie Beverly’s “Back In Stride”. The song itself is more or less a presentation of why marijuana is the best drug of choice when compared to others like crack, ecstasy and cocaine, as Devin raps:

“I got an old school partner, he smokes crack
He’s fierce with the lyrics, but he probably won’t come back
To the studio, because he might be out creepin’
In somebody’s house, tryin’ to clean ’em out…thievin’
I know another nigga, he smokes fry
He always cry, but we don’t know why
Tried to give him advice but, he wouldn’t take it
Saw him last Wednesday walkin’ down the street naked
And my homeboy used to holler, but he’s out there snortin’ powder
Hour after hour, but he never takes a shower
I guess it’s cool, if you can handle ya thang
But it’s kinda fucked up if you dismantle ya brain”

After a short skit called “Twitta”, the album closes out with the Mirawge & Big Baby-produced “Funky Lil Freestyle”. The Dude goes on a stream-of-consciousness flow, mostly about weed. He also makes a mention of the fact that he’s proud that his seventeen year-old son has chosen not to smoke. Mostly due to the fact that he won’t have to worry about him going into daddy’s coughee stash.

“Suite #420” contains fifteen tracks and prior to its release, six of those were available on Devin’s “Do Not DistHerb” EP which was released online through retailers like Amazon and iTunes as an appetizer for the main album. I’m not sure how many people purchased the EP with expectation of having a totally different set of songs on the album, but the other nine tracks help to make the album better. Lyrically, Devin doesn’t bring anything groundbreaking with this release…but his fans will still appreciate what they get. On the musical front, The Dude has a penchant for picking (and in some cases, creating) beats that work best with his flow. Overall, as expected, “Suite #420” was a smoked out room filled with weed and women, but every now and then the listener gets a dose of reality. It is that combination of elements that makes Devin’s fans want to make return visits, if they even check out at all.