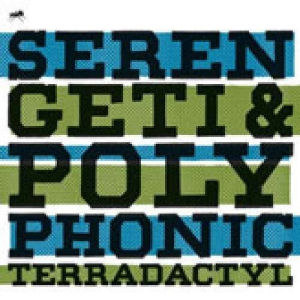 Man, hip-hop sure has gotten interesting. I wish I could put a moratorium on people either hating rappers because they all sound the same or liking rappers just because they don’t sound like the shit on the radio. Those with such opinions aren’t looking hard enough. Hip-hop has long since moved past a place where it need be judged simply by how much it does or doesn’t sound like the mainstream.

Take “Terradactyl,” the 2009 anticon debut from chicago MC Serengeti and producer Polyphonic. With ‘geti’s cerebral montone and Poly’s dissonant glitchings, it is tempting to call the record brilliant because it sounds nothing like what is on the radio, but that would be too simple. “Terradactyl” operates on its own terms. Realize, this is neither a strength nor a weakness, but simply a reason to judge “Terradactyl” based on how good it is, in and of itself, not based on how much it does or doesn’t sounds like something else.

The truth of the matter is, “Terradactyl,” is a good album, but definitely not a great one. There are moments of brilliance to be sure. “Playing in Subway Stations” features our MC talk-singing over an accompanying female vocal, crooning folk sentimentality on top of ‘phonic’s melodic electronica. The simplicity of the lyrics (“Playing in subway stations wasn’t that fun for us/At first it was but not its getting old/At first it was but now I’m getting cold”) is brilliantly juxtaposed with the beat’s complexity. On “My Negativity,” The Windy City poet’s freeverse over muffled trumpet and dusty violin is both strikingly absurdist and sad, two moods that intersect so well but so rarely.

These moments speak to the tremendous potential of this duo. I am optimistic that this potential will be reached on their next collaboration, but it isn’t entirely reached here. Serengeti’s lyrics, while always unique, do not always match Polyphonic’s abstract and scattered tone. This leads to interesting juxtapositions, but also to awkward contrasts, such as on the album’s opening track, “Bon Voyage,” where mundane lyrics like “tickle test, tickle test/before the first time that we had tickle sex” feel out of place over a backdrop of heavily distorted futuristic bleeps. The production, while largely dynamic within any given song, falls back too hard on glitch, leading me, at points, to question Polyphonic’s versatility.

Still, the talents of this producer and MC consistently shine through. It is tempting to end this revue by throwing Serengeti and Polyphonic a few compliments for being “innovative” and “different,” but at the end of the day, all I should really be asking myself is: do I like how it sounds? Fortunately, I can answer that question with a simple “yeah, pretty much.”