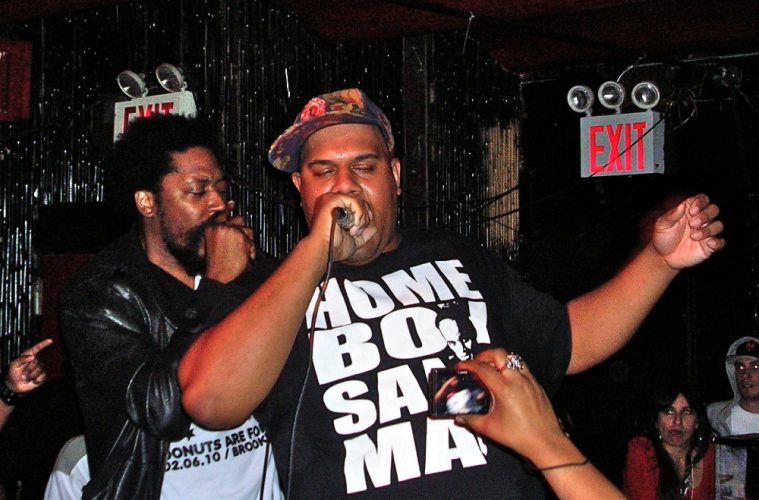 Some people have made the claim that it seems like I’m everywhere. While I may not have *quite* that impressive a travel schedule, I will admit I do get out a lot, especially to shows in New York City. The other day I was telling RapReviews head honcho Flash about going to four events in one night last week and he said, “it’s nights like these you should blog about on RapReviews.” I liked the idea and created Travels With Adam B. It’s something that will give people an inside look into my occasionally crazy nights covering shows and roaming around New York City bumping into artists. Today’s debut column will cover the four shows I hit up in one night this past Thursday, April 8th, 2010.

5:30 PM – This has nothing to do with music, but I saw a woman on the train eating a cucumber and it was significantly less sexy than pornographic fantasies might lead one to believe. Just an FYI there.

6:15 PM – I made my way to SOBs just as the place was filling up for Debi Nova’s artist showcase there. Nova is a Latin artist who is readying the release of an album that will feature both English and Spanish lyrics. I like a little Latin music in my life, but I’d be lying if I didn’t admit the three things that got me there were the fact that she’s gorgeous, and the phrases “free food” and “partial open bar.” I had a few drinks, but not a few too many, and enjoyed Nova’s performance. She not only sings, but can play the piano and the guitar and has a little bit of a Shakira vibe in her personality (and don’t we look nice together?). During the show I ended up chatting with one of the most beautiful girls in the place, who happened to be friends with one of the people from the label. I invited both them, and another friend of theirs, to take a walk with me to the next show.

8:45 PM – We all made our way to the Bowery Poetry Club in time to catch the end of the final set of Shawn Randall’s Symphonics show. As we walked in Randall was on stage with some Bowery favorites, including Duv and Grace, and I said what’s up to Super King Armor (“WARGANISM!”) before he hit the stage for the freestyle session. Hanging around after the show I continued my fairly liberal night with the libations, having a few $3 PBRs (awful beer, but great price, especially for NYC), and waited for the next show, The Coffee Grind, to get started.

10:00 PM – As people started coming in for The Coffee Grind I had quick conversations with Creature, who runs Coffee Grind Media, Bisco Smith, who is about to embark on a European Tour, and Sav Killz, one of the hardest hustlin rappers in the entire city (I always try my best to look gully in pics with Sav Killz). I copped two shirts off of Creature, one with his Rebelmatic logo and one that says (and I LOVE this) “Wake Up And Smell The Hustle.” When Chaz Kangas showed up we had a beer, my new friends from the Debi Nova show made their exit (something about waking up for work in the morning), and we decided on a time to dip to the next event, which was Brown Bag Thursdays at Voodoo Lounge. At around 11pm we started to make our way there. Before leaving the Bowery, however, we bumped into YC The Cynic and Kalae All Day and said what’s up.

11:15 PM – Before even getting inside Voodoo Lounge Chaz and I were greeted by J57 of Brown Bag All Stars. He and Chaz engaged in a thought provoking conversation about fucking magnets. (How do they work?) Poison Pen walked up to the spot. I had a quick convo with Pen and then turned around to see Skila, who I hadn’t had a chance to hang out with since the last days of The Knit back in late 2008. Walking into Voodoo Lounge I saw Super King Armor was already there and Ciphy Diggy and K. Gaines were on stage (pictured above R to L, and big ups to Ciph Diggy for how freakin hard he’s promoting his new solo album, Untitled Wave. The man has been hittin stages like crazy the past few weeks). The spot was packed. I bumped into Jesse Abraham, Mr. Beatz (his new album, Spit Therapy, just came out last week), M-Tri, DJ Leecy T, and a ton of other folks, including some of the other chroniclers of the scene, including Natty S, Donovan Kasp and I Heart Dilla.

11:45 PM – Knowing I needed to catch the 12:17am train if I wanted to get three hours of sleep, I made my way to the exit, where K. Gaines promptly turned me around and sent me back in to get my copy of Untitled Wave (which I thought was internet-only, but was THRILLED to find out is on CD, as well). I made my way back out again, said peace to J.Monopoly of OISD, who was outside the spot, and grabbed a cab to the train station.

2:00 AM – For some God unknown reason I decided to jump on Twitter after getting home. FYI – That’s not the best way to get to sleep.