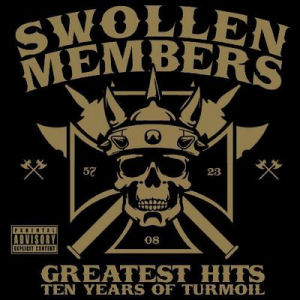 This past November I wrote the review of Swollen Members’ “Armed to the Teeth,” and while it was my first exposure to the Canadian hip-hop collective, I found “ATTT” to be an interesting listen. Shortly after the review was published, I received an email from one of our readers with a totally different opinion of the album. He called it their “most disappointing album to date” and went on say that they “just sound like everyone else now”. Perhaps it’s only right that I get a more expansive look at the Members’ catalog of music from 1999’s “Balance” through last year’s aforementioned “Armed to the Teeth”. This greatest hits compilation, subtitled “Ten Years of Turmoil” also comes with a bonus DVD that features all of the group’s videos and some behind the scenes footage. While designed to showcase the best from SM’s five group albums and one compilation, almost half of the album’s eighteen tracks are from “Black Magic.”

Things open up with “Fuel Injected” from the “Bad Dreams” album, and it fits in perfectly as it has the feel of an introductory song. Other tracks from this album are “Bring It Home” and “Deep End”. The former features Moka Only and is produced by Seanski. Two songs from the “Heavy” album find their way onto the disc, “Watch This” and “Bottom Line”. These tracks have a more uptempo sound to them, courtesy of Rob The Viking. The lone song from the B-sides compilation “Monsters in the Closet” is “Breath”, it features a hook from Nelly Furtado and a verse from Moka Only. “Lady Venom” and “Horrified Nights” are the two songs from Swollen Members’ debut album, “Balance” that made it to the greatest hits collection. The latter has a dark sound to it, provided by Alchemist and complete with stings and a reference to the 1983 film, “Scarface”. “Lady Venom” is produced by Paul Nice and has a chant that gives the song a Middle-eastern sound to it. The aggressive “Warrior” and raunchy “Pornstar” are the inclusions from “Armed to the Teeth.”

As I stated before, songs from 2006’s “Black Magic” make up almost half of the tracks included here. To be exact, there are eight joints, including the mellow “Put Me On”, which features Everlast. Other treats from this album are the Evidence-produced “Dark Clouds” and “Black Magic”. There’s also “Pressure”, which sounds an awful lot like “Watch This”, only in a higher key and a bit faster. Maybe that’s why they are paired back to back in the tracklisting. The collection comes to a close with the posse cut, “Swamp Water”, which features Phil Da Agony, Planet Asia and the turntablism of DJ Revolution.

Looking back at that email I received, I can see what that reader meant when he said that the Members seemed to have changed their style. Let the Members tell it, the changes are all about evolving, but some aren’t as open to that explanation. Perhaps the release of this “Greatest Hits: Ten Years of Turmoil” is SM’s way of thanking the fans for riding with them for so long and hoping that they continue to stay down for the next ten years. The DVD with all of the videos and behind the scenes footage is a sweet bonus as well, especially for newbies (including myself). For those new to the Swollen Members brand of hip-hop, this is probably the best place to start.