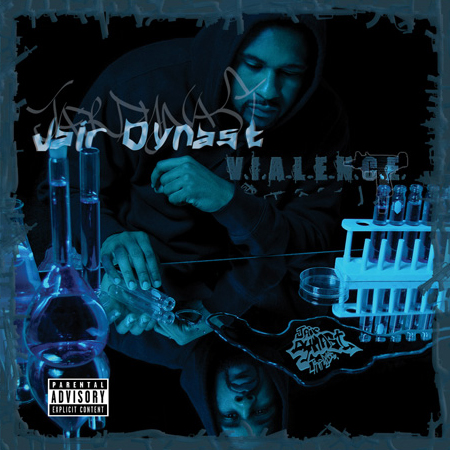 Jair Dynast is striving for change. Or at least that’s what he would have you believe. One look inside his album pamphlet, and sweet baby Jesus, if there ain’t a coinciding paragraph for each of the eighteen tracks inside. Listeners are given fair notification the obscene degree of social commentary about to be served upon them, all declared in one unnecessarily long fold-out booklet. Even the likes of Talib Kweli have deserted the “conscious” name tag and left it for dead, so it’s a baffling notion that anyone would be so quick to embrace it.

Frankly, it doesn’t do much for his image. Reading the life chronicle inside his CD case, he comes off an egotistical, albeit completely unproven chump with a mic, and dammit altogether if I’m psychic, he does little to prove me wrong. First of all, his Little Buddha facade is false advertisement, with violent battle lines indeed abundant all over his debut. He’s trying, alright. He’s giving it his best shot, and not trying hard enough.

At no point does he take an almost slightly imaginative approach to his preachy rap. Tracks like “Change” offer nothing more than Jair asking when things will ever look up, and he can only profess his exhaustion of hood problems on “Spread Love.” Alas, these songs are relative high points on “V.I.A.L.E.N.C.E.,” as there is at least a semblance of ingenuity. The “Intro” is Jair trying to “start this shit off right,” but you really can’t start off an album any worse than bad rapping over an aggravating beat. And with the concept of a track being words-that-begin-with-‘in,’ there’s little wonder why Jair sounds altogether amateurish. Its tracks like these that make it seem like the man doesn’t even think about what he’s saying when he writes it down. Inflammatory: big word, check. Incapacitate: sounds cool, we’ll go with it. Individual, investable, and, let’s see, infatuated. Check, check, and check.

Moving on, Jair remains sounding consistently bored, boring or just plain lame. “It’s gorilla warfare, North America,” he repeatedly squalls on “Gorilla Warfare,” “and these are some trying times.” One has to hear just how wack this sounds to truly appreciate it. By the way, J dog, you may want to spell ‘guerilla’ correctly next time, so as to differentiate from full-on monkey combat. “Like A G” is recycled frontin’-in-the-club garbage, but if you’re interested in a “y’all don’t hear me, though” hook, this should be right up your alley.

But then, just when you thought it couldn’t reach a lower low, Jair firmly plants his fists three feet deep in the soil. To think dude would have the brass nuts to even mention himself in the same CONVERSATION as Martin Luther King is an overwhelming and bedazzling conception, but what a pain it truly is to hear him COMPARING himself to the man, preceding the most hypocritical and preposterously dim-witted line of the whole album: “I got a dream that you won’t fuck with me, so that I ain’t gotta shoot ya.” Indeed, a slow clap was never more appropriate.

As the album unfolds, even more scrutiny is put on the lyrics, ’cause flat out, there ain’t a single beat I’m really feelin.’ The production scarcely varies from head to foot of the LP, while your ass is left hanging in the wind, waiting for Jair to drop his life-changing narrative. Rather, we’re left with a pitiful attempt at triple cadence rap on “That’s Us,” and laughable quotes aplenty. “Call it gold, frankincense and mer when I spit.” What, for the sweet love of joy, is that supposed to mean?

Jair Dynast handles everything on this release, the production, writing, recording and rhyming, and it shows. It isn’t that “V.I.A.L.E.N.C.E.” is a cohesive listen, it’s more like it sounds as though it was too much work for the poor guy to possibly handle. Among many things Jair has yet to learn about putting together a rap album, it isn’t necessarily what you say but how you say it. The conclusion? Develop one of two things: 1. A style nobody can touch but you, or 2. A style we can tolerate. It’s hard to rap without either.