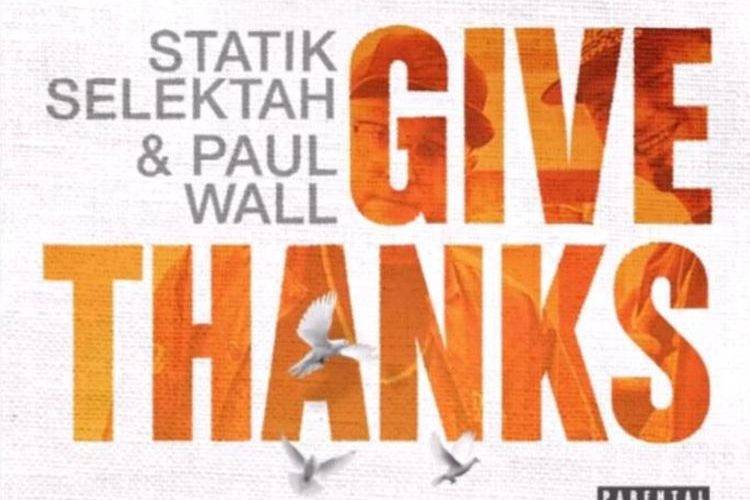 Paul Wall & Statik Selektah :: Give Thanks

For a producer rooted in the East Coast, it’s been a year of experimentation for Boston’s Statik Selektah. Having built a legacy with eight excellent all-star records, 2019 has seen three EPs that see Statik flexing his creative muscles across the United States. April saw “Trill Statik” with Houston’s Bun B, followed shortly after in May by “Gran Turismo” with New Orleans’ Curren$y. Both drew positive reviews from this very site, so it’s not surprising to see November’s “Give Thanks” with Houston’s Paul Wall is just as good.

What is surprising is the fact Paul Wall is rapping over Statik Selektah production. Curren$y and Bun B have collaborated with Statik in the past, but Paul Wall is associated with the Chopped and Screwed style of Southern hip hop. He’s the guy who did “Grillz” with Nelly and is known just as much for his grill business as his music, which feels like the antithesis to the traditional, sample-based hip hop Statik represents. So this collaboration piqued my interest more than anything Statik’s done before.

The only chopping and screwing taking place on “Give Thanks” is that of Statik’s turntable needles, scratching up the hooks. Paul’s flow is as refined as it ever was (if not more so) given the production here acts more like a template for his thoughts than the overbearing thump his earlier records possessed. It’s not so much a reinvention but a reinterpretation of an emcee given the different landscape he’s painting his picture on. The first track “What It Do (Sean P Energy)” is just as the track states – ignorance laced with humor. Lines like “she picked me up like an Uber driver, then went down like a scuba diver” had me spitting my beer, but in a GOOD way. That’s not to say Paul is a lyrical genius (“I’m stoned like limestone” being a particular clanger) but there’s an affable charm to his obnoxiousness, much like a certain Mr. Price.

B-Real has excelled over Statik production with songs like “Overdose” and “Shake ’em Up” but the way he weaves in and out of the beat makes me want a B-Real x Statik EP next. I never thought I’d see Benny the Butcher joining Paul Wall, let alone the latter dropping the better verse. Given the amount of guest verses Benny has dropped this year, I guess a throwaway was inevitable.

“Part of the Game” best exemplifies the new Paul Wall with a notably heartfelt performance, aided by a rabid Nems.

“They tell you ‘Do you’, it’s cool to be different
Then they criticize and clown you, it’s a cold world isn’t it?
Square pegs, I just don’t seem to fit in it
The hate is imminent, although insignificant
I got to follow the game plan and focus
With hard work and faith, I’m ferocious
No handouts or shortcuts, they always end up bogus
They rather I was broke than meet my stockbrokers
I had to switch the grip up because I kept on strikin’ out
I had to ask myself do I want the money or the clout
I had to redirect my actions, rearrange my route
Prayers keep my mind strong and keep away the doubt”

This 21-minute EP may be short and guest-heavy, but shows Paul Wall in a different light. There’s fewer more embarrassing sights in hip hop than rappers in their forties telling the same stories they shared in their twenties, and Paul clearly sounds grateful for his career and acknowledges the need for growth. Yes Paul, I know you’re only 38, but it’s great to hear a refreshed and sharper Paul Wall than we’ve witnessed in years. Fans should give thanks, especially to Statik Selektah who has had another stellar year.