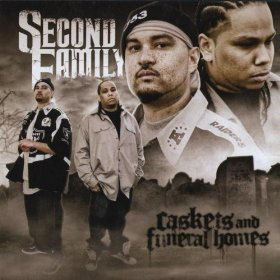 Tacoma, Washington is not known for hip-hop music. While Seattle and even Portland have gained some recognition for the northwest, Tacoma has remained overlooked. Second Family looks to change that with their debut CD “Caskets and Funeral Homes.” Consisting of rappers Element and NoQuestion, the duo represents Tacoma, or Tac-Town as they call it, to the fullest. NoQuestion’s relaxed brags contrast Element’s commanding flows as the duo tackles a little bit of everything on the albums’ 18 tracks.

Musically, Second Family borrows elements from the south, the west, and the midwest. “Bout a Swag” features a chopped and screwed hook, bass heavy beat, and dark synths to make for a southern club beat. “Plague Your Mind” uses haunting bells and eerie female vocals to mimic the darker midwest sound made famous by BONE and Tech N9ne. “253 In Us” is straight G-Funk, with a relaxed beat and slinky bounce in the melody. The duo veers from the conventional on a few tracks. “Superhero” features acoustic guitars over R&B grooves, making for a smooth, laid back track. “That’s The Business” features upbeat drums laced with a simple, but banging, sample.

Lyrically, Element and NoQuestion bounce off each other well and keep things interesting throughout. “Intro (Hells Gates)” stays true to the album’s dark title:

Element: “My heads polluted with the cries of sinner’s repentance
All around me ascertain the spirits simmer with vengeance
It’s obvious that it’s too late for me to send for religion
Or even bother screaming “Father, Help Us!” â€“ This is the ending
Little children filled with disease
Murderers and thieves still in their teens
Warlords, pillaging scheme, villager’s screams
Families torn apart at the seams
The worst the world has to offer is now right here with me
Please, somebody go and tell god it’s an emergency
Promise in a hurry cause we’re talking an eternity
My flesh is on fire, steaming but no bleeding
And how the fuck am I speaking but not breathing?
Saw a flash of light, the sky started showing me
Flashes of my life and then my family standing over me
Somebody please wake me, I know this ain’t home for me
Then I heard a voice just as I saw the gates opening”

“The Game” finds the duo reflecting on street life over a Dre-esque beat:

No Question: “Face run, used to blaze drugs, then spray slugs
That could send me straight to hell, like fucking gay nuns
Like a bitch’s shoe fetish, always stay with pumps
Frostbitten streets made niggas freeze, I bundled up
Never stumbled once, stunt, crumbled purple in the blunt
Hunger pains, you can hear the rumble coming from my gut
A+ in the clutch, I seen niggas self destruct
Unable to reconstruct, shit out of luck
My verbal weapons are more aggressive than torture methods
Cruel intentions to burn complexions, they learn they lessons
For the most part, you niggas is wack
Jealous cause I’m filthy, they just wish I cleaned up my act
It’s a rap when you slip, trip, and fall through the cracks
Ice picks, die quick, battle axe in the stash
Silverback snapping necks with the force of my grasp
Razor cuts make it easier to tear you in half
It’s a chainsaw massacre
Beating faces til they turn lavender
Go your days numbered like a calendar
Kill and destroy, disfigure your joy
Even pedophiles wouldn’t dare to fuck with your boy
Hell yeah, you can tell that I’m asking for drama
I plan on being rich so I didn’t vote for Obama
Fuck spreading wealth, help yourself
Talking change doesn’t kill the welts
NoQuest for president, 2012″

The duo’s mic skills shine most when they stick to their respective strengths. Element is the groups’ natural storyteller and his skills come through best when painting vivid dark pictures or reflecting on his own life. NoQuestion’s brags come off best on street anthems and club tracks.

Overall, “Caskets and Funeral Homes” is a mixed bag with plenty of highlights. Element is in his zone on darker tracks like “Hells Gates” and “Plague Your Mind.” NoQuestion murders his verses on “The Game” and “253 In Us.” Despite the highlights, the duo seems to spread itself a little too thin over the course of the album. Tracks like “Bout A Swag” and “In Tha Trunk” do little to distinguish Second Family from every other group trying to cash in on the current hot sound. While “Superhero” works as a track about the ladies, “Caught Up” just comes off as corny and forced. The addition of “Closer” and “It’s On Me” makes for an overabundance of R&B inspired tracks, even if the tracks themselves are passable for what they are. If the album were cut of the excess and restricted to the dark and street oriented music, it’d be a much more cohesive product. As is, it works as an effective introduction to what Tac-Town has to offer. Second Family has plenty of talent and with more focus should do well in putting their town on the map.