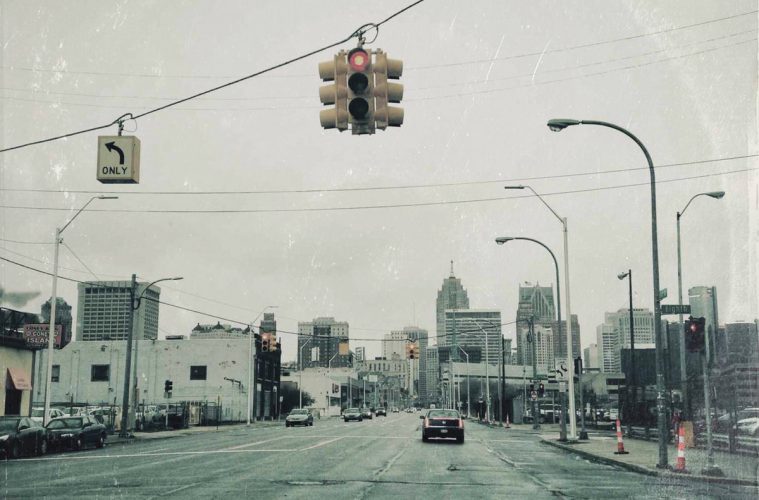 The term “large” goes both ways for Detroit, Michigan. Not only is it the largest city in the state, but it has also spawned some of the largest musical acts in the world: Aretha Franklin, Madonna, The Temptations, and Eminem, to name a few. The city is responsible for birthing the musical genres of techno and Motown soul, the latter of which played and continues to play an integral part in sample-based hip-hop productions. The city’s hip-hop scene bears much in common (as do several midwestern U.S. cities) with the New York City scene which gave rise to the genre: Lyricists and producers who all seem to have honed their skills through a hard-nosed, blue-collar come-up. While Eminem is certainly the biggest hip-hop artist from Detroit and Slum Village is considered the most seminal hip-hop act from the city’s subterranean arena, one of Detroit’s foremost beatsmiths (armed with a sampler and tons of vinyl albums) put his entire city in his sights to compose a musical love letter to it. Apollo Brown, along with at least 50 hometown rappers, all contributed to said letter, showing the world all aspects of their city’s hip-hop. And then they signed it with, “Sincerely, Detroit”.

Promoted as a concept album, “Sincerely, Detroit” has Apollo providing soulful backdrops for emcees “from different eras and different walks of life, veterans and newcomers alike” in “Detroit Rock City”. Apollo’s variability in his beats is proportionate to the styles of the emcees he’s enlisted for his project. Consisting of 20 songs, the album starts off with “Fate”, an infomercial about Detroit overlaid on atmospheric samples. The first single, “God Help Me”, is customary Apollo Brown: Boom-bap drenched in urban soul and DJ cuts (courtesy of DJ Los) with emcees Black Milk and Ketchphraze tearing the mics down. Denmark Vessey and Quelle Chris appear as Crown Nation and provide their vocals to “Commas & Apostrophes”. Honestly, I haven’t been a fan of Quelle Chris because of his voice delivery and my initial thoughts on this song was that it was minimal sounding in terms of production. However, it proved to be infectious with the two emcees flowing over Apollo’s use of bell snares and the haunting vocal sample flip:

Mr. Brown’s production sounds consistent throughout the album, though his sample-based style may be an acquired taste to devoted radio aficionados. On “Longevity” (featuring Trick Trick, Marv Won, Moe Dirdee, & Dez Andres), the most stand-out part about the production is the drums and how they sound nearly live. “Thoughts In Mind” is a fine example of how the beat and the rhymers are in sync, particularly with Chris Orrick’s verse. “Stopwatch” also falls into the same vein with its soul-sampling foundation and eLZhi kicking it off with a well-crafted verse. “Lettin’ Go” is pretty smooth with its combination of string, vocal, and flute samples. The toughest beat on the album is “Never”. Although all of the beats up to this point have been head-nodders, this one makes your face look like you’re taking a mean dump. Paradime and Miz Korona also deserve props for appropriately going hardcore over this hardcore beat. Another album single, “Dominance”, also contains a hardcore aesthetic. It evokes a DJ Premier influence in the beat and scratched in vocals for the hook. Aztek the Barfly starts off first and he has an M.O.P.-esque energy to his delivery:

Slum Village make an appearance on “All Day”, complete with horn and saxophone samples and it’s refreshing to hear them outside of a J. Dilla production, pre- or posthumous. “Deception Woes” features Clear Soul Forces and though the clarinet sample is striking, the line “Gatekeeper mentality will keep you beneath the surface” hits harder with its poignancy. Detroit underground veteran Bronze Nazareth welcomes you to the west side of Detroit on “Over Do It” which leaks of vintage soul. Mr. Brown makes use of atmospheric vocals and samples on “In the Water” with emcee Boog Brown flowing naturally over that beat. “365” has an R&B feel to it, like a hip-hop beat that’s tailor-made for a singer to croon over. Ty Farris’ wordplay on the last verse gives the track a bright luster, though. Guilty Simpson is a city luminary who doesn’t miss out on “The Backbone”. He does his thing on the mic while Melanie Rutherford’s somber vocals go with the vinyl crackling sample.

Seven the General, Nick Speed, & Big Tone appear on “Jacksons”, with a hook that states “pockets crammed with lotsa Jacksons” to reflect the old adage of how money makes life easier. On “Can’t Lose”, the appearance from Royce da 5’9″ is the biggest surprise here. If you’re looking for an Eminem appearance or a posthumous Proof verse at this point into the album, I’m afraid you’ll come up short. “Break the Code” is an intensely soulful track with Supa Emcee’s intensity matching. Kuniva is also featured, and he’s the emcee on the track with the most familiarity to my ears since I was a D-12 devotee in my late teens. Rounding out the album are “Skimmin'” with its very chill snares and a dope verse courtesy of Nolan the Ninja; “What Up” closes out the LP with its Detroit boom bap beat. Although Detroit’s rap scene has been known about for years, “Sincerely, Detroit” showcases all of the facets the city has to offer, packaged by one of the steadiest producers to come from the city.