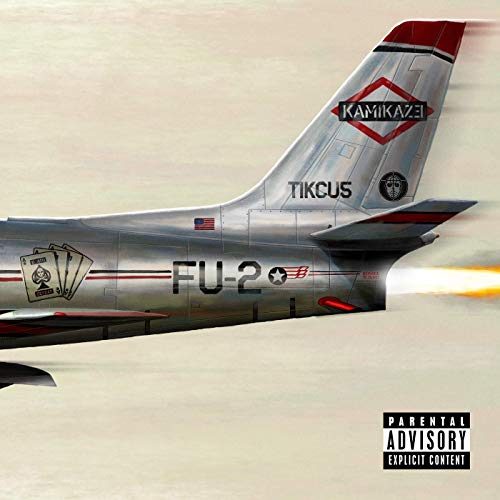 “I done won a couple Grammys, but I sold my soul to get ’em”

It takes a minute to truly comprehend that Eminem has been in the rap game for over 20 years. I remember living in Eastern Michigan for a cuppa though right when “Infinite” got pulled from store shelves, all because Marshall Mathers signed with Andre Young. It was not the first or the last time someone involved with his recording career would redefine it after the fact, not the least of which is Mathers himself. In fact his new album “Kamikaze” is basically an attempt to de-list “Revival” the way Sega did Sonic 2006 after Mathers felt it was a swing and a miss. To me at least it wasn’t that bad but he’s entitled to his own opinion.

Even though Mathers has said repeatedly that “Revival” wasn’t his best effort, tracks like “Fall” indicate he’s still a little sensitive about the flack some reviewers gave him for it. If it seems contradictory that he wants to admit it wasn’t that good yet still defend it artistically, welcome to every recording artist ever — the line forms over there to the left.

“Just remember, I was here before you
And I’ll be here after you, make your run-in for you
Detractors, I might have to f–k Pitchfork with a corkscrew
Just what the doctor ordered
Revenge is the best medicine, increase the dose
from least to most and then tell the Grammys to go
and f–k themselves, they suck the blood
from all the biggest artists like some leeches so
they nominate ’em, get ’em there, get a name to ’em, see the show
Every parasite needs a host (haha) then give
‘Album of the Year’ to somebody that no one’s ever even heard of
All I know is I wrote every single word of everything I ever murdered”

Can Marshall really have it both ways? Maybe someone who’s not a 20 year veteran of the music business would be a little suspect criticizing both himself AND his critics, but Mathers isn’t wrong about outlasting his friends and his foes alike. Every hack who called him either “The Great White Hope” or “The Great White Dope” is long gone and he’s still making music. One thing remains consistent about his entire tenure — Eminem will say anything for a punchline and do anything for a “pipe bomb” mic drop line regardless of how it will be perceived. Lesser artists could not get away with the amount of controversy Eminem has purposefully and repeatedly courted, but lyrical skills pay the bills and Mathers still has plenty.

Somehow “Good Guy” encapsulates what Eminem is on this album and in his career — two opposites existing in the same space at the same time. The words themselves are crass, but the song itself is thoughtful and sounds like a reflection on his relationship with Kim, which leaves him asking at the end whether he’s really the good guy or if it’s all just pretend. This slickly produced song by Em and Illa Da Producer featuring Jessie Reyez won’t be the best remembered track in years to come though. “Venom” from the movie of the same name (and accompanying soundtrack) will be this CD’s legacy song.

The best tracks though are the ones that have not been featured as singles and are not likely to ever be. “Normal” is a song where Mathers portrays a protagonist who slipped over the edge and became a stalker. “Stepping Stone” is like “Venom” co-produced by Luis Resto, but is a much more heartfelt track which seems to address the fact he wanted D12 to be bigger than they became — although Proof’s untimely death has as much to do with that as anything. Some things that didn’t seem like they’d work out did though, such as his revived friendship with Bad Meets Evil bandmate Royce Da 5’9″ and their duet “Not Alike”.

If there’s any irony to “Kamikaze” it’s that I think the music on “Revival” was actually a little bit tighter, catchier, and easier to bump in the ride. Despite the homage to the Beastie Boys on the album’s cover “Kamikaze” is not a party album. It’s often times a moody album, but like it or not that’s also when Marshall Mathers can be at his most honest and lyrically sharpest. It’s always fun to hear him throw daggers at pop culture figures, but he never cuts quite as deeply as when he aims at his own shortcomings. It’s undoubtedly painful to him and perhaps even painful to listen to, but he renews himself and his career through cathartic releases such as this.