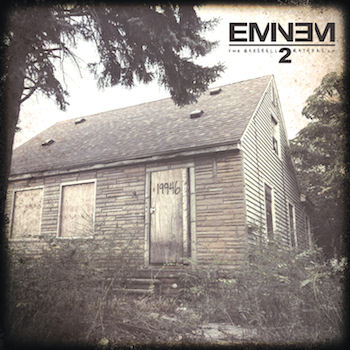 Throughout the past few years of Eminem’s career, one particular song has been coursing through my veins whenever his journey springs to mind: Embrace’s beautiful “Come Back To What You Know” which was originally released around the time that the Detroit MC first started to gain real traction. On “Relapse” he was flushing the drugs and the past out of his system, resulting in a bizarre Dr. Dre collaboration (not without merit) that missed more than it hit; on “Recovery” he allowed outside producers into the fray, allowing him to concentrate on writing, and it spawned a divisive album with some great cuts and one of his biggest hits to date; then, Royce da 5’9″ returned alongside his ‘evil twin’ to deliver an enjoyable and lyrically-driven Bad Meets Evil EP.

People were surprised by each turn of events, yet after you’ve been through a life-threatening shock, you spend a few years trying to recapture that “lightning in a bottle” or experimenting with new experiences. That entire series of events was absolutely indicative of the most typical human behaviour. How did Eminem initially blow? He released a cult fans favourite album that he later regretted (for “Relapse” read “Infinite”). He then released a divisive album with a couple of huge singles that made him a global star, introducing him to a new generation (for “Recovery” read “The Slim Shady LP”). He doubled up with Royce Da 5’9″ in order to fully sharpen his lyrical skills with someone that could push him (for “Hell: The Sequel” read the “Nuttin’ To Do” and “Scary Movies” era). What comes next, dear Reader? There was only one logical outcome. Eventually, you always come back to what you know.

So here it is: “The Marshall Mathers LP 2” arrives thirteen years later as a “revisitation” as opposed to a full-on sequel. That’s wholly accurate, as very little from the original survives (probably hacked to death via chainsaw), yet it’s certainly representative of that era, and perhaps adding a touch of “Recovery” to the blend. This feels fresh yet familiar; a throwback picture in a modern frame. It’s a similar mammoth length as the original (both in terms of firmly landing in the over-70’s bracket), and they even each have seven individual songs that weigh in at over five minutes apiece. That length would indicate that this may be his last album for a while, maybe as he figures out his next move (an aside: seeing him helm a Detroit-focused compilation would be marvelous, highlighting the various talent in his area – just an idea).

Unfortunately at times, it could well be argued that the length proves to be indulgent as the middle has a couple of consecutive dodgy moments and some tracks could have done with a bit of circumcision. Other questionable parts of MMLP2 include: no Just Blaze (why, Rap God, why?); a law of diminishing returns regarding Rihanna duets; there’s no “Drug Ballad” follow-up aged 40; and the tragic misuse of Kendrick Lamar. However, let’s set those issues aside for now and make this abundantly clear – “The Marshall Mathers LP 2” is due to go down as THE most complete, fully realised Eminem album of his career. It may not necessarily be the BEST LP of his canon, but it’s the most well rounded conceptually, whilst also maintaining high levels of lyricism, production and killer choruses.

The key complaint about MMLP2 is that Mathers is technically proficient, but essentially writing about nothing in particular. While that occasionally proves to be the case, it’s the exception – not the rule. It’s an opus that will divide opinion based on where your loyalties lie within the genreâ€¦ For this is an album that is set to soar over heads, flying as the crow does straight for the truest of Eminem fans out there – they will absolutely lap it up. In a year when Jay Z was actually rapping about nothing, Eminem may not take it to the levels that Nas summoned up on “Life Is Good” but as an industry veteran with fifteen years plus of limelight in his locker, still shows his age group that dumbing down is simply not an option. Yes, the relentless dick jokes, misogyny, homophobia and violence are back with a vengeance – but so are the infamous themes upon which Em initially built his reputation, including drugs, concepts, unbelievable wordplay, family and a self-deprecating sense of irony. If you’re not much of a fan, you could pick holes in MMLP2 all day long – but if you are, you’ll love the vast majority of it.

“Bad Guy” is absolutely classic Eminem, picking right where the first instalment left off – the lyricism is epic, the voices dead on, the musical vibe just right. Unfortunately, as the track switches for the last two minutes, we get the latter day shouty version and although he gradually dials down to a whisper (a la “One Mic”), the effect is slightly jarring. “Time of the Season” is an all-time personal favourite of mine, and taking it on was a massive risk – but buoyed by the support of Rick Rubin, “Rhyme or Reason” works surprising well (although the beat would have been tailor-made for a “Drug Ballad” sequel – yes, I’ll keep repeating it ad nauseum). “So Much Better” finds the rapper turning producer and channelling the Dre ’99 sound to solid effect with a typically adolescent and thoroughly catchy chorus. “Survival” has received a bizarrely lukewarm reception – but having ducked it initially (assuming it was just a bonus tie-in to a video game), it works brilliantly within the album format and is a worthy addition to his collection of singles. Yes, it’s reminiscent of “Won’t Back Down” and is even produced by DJ Khalil as well, but it fires on most cylinders. Nobody can place himself within the psyche of bullied school kids like Marshall Mathers III, and “Legacy” provides a highlight – almost like the audio version of the “No Love” video. Yes, he’s hardly reinventing the wheel, but he’s simply sticking to his strengths with laser-guided clarity.

The trio of Eminem, Alex da Kid and Skylar Grey has usually gifted us some incredible music – unfortunately, “Asshole” doesn’t live up to their previous work together. It’s not bad, per se – just a touch aimless and without a strong hook/beat to fall back on. “Berzerk” is deceptively catchy but, again, proves somewhat disappointing mess and goodness knows how it made the album, let along got nominated as the first single. The singing is a stretch, the subject matter/video barely match and while the throwback Rick Rubin/Beasties vibe works well on paper (I can say “white rapper” thread, right?), the end product is a letdown. “Rap God” may not have the best beat of all time (think Bangladesh-lite), but it provides a solid foundation for Slim to go fucking bananas over – it’s a lyrical and technical bragfest, saying absolutely nothing, but who cares when he’s ripping shit to shreds? He IS a rap god, and on an album that is the very antithesis of “Yeezus” it’s still inspiring to hear artists such as Mathers and West cheekily backing themselves as deities. One could argue that “Brainless” could be added to that dodgy middle core, but it’s a solid album cut that somewhat harkens back to “The Eminem Show” era.

It leads into another tie-in to the first Mathers LP, the “Kim” referencing “Stronger Than I Was” which is a clever subversion of roles, timeframes and even singing/rapping. “The Monster” is a proficient radio single, ably assisted by Rihanna – but it doesn’t compare to the utterly perfect in every way “Love the Way You Lie” (it’s a fine enough earworm but perhaps the mere presence of RiRi was a strategic error). Rick Rubin pops up for the third time and kills it (alongside the star of the show) on the cracking Detroit anthem “So Farâ€¦” – a song that conveniently shows up everything wrong with “Berzerk”.

The only head scratcher left comes in the form of “Love Game” – produced by Rubin, Kendrick Lamar does pretty well but while I get what they were aiming for (tongue-in-cheek shock rap about girls), it’s only marginally successful as a standalone number (it’s probably best to just let it wash over you). “Headlights” acts as a follow-up to “Cleaning Out My Closet” – a mea culpa, in fact, with Mathers getting his “Dear Mama” on to spine-tingling effect. Nate Reuss (of Fun) continues his own fine run with an eternal chorus, and this is the kind of song Eminem’s legions of fans have always responded to without fail – a single/video surely beckons. The closer is titled “Evil Twin” but unfortunately doesn’t feature Royce da 5’9″ – it’s still the perfect way to end MMLP2 as the sharp wit and concepts return (and assist the Repeat Album button to great effect).

“The Marshall Mathers LP 2” doesn’t need an epic conclusion within this review. It’s as simple as this: Eminem comes back to what he knows, and looks after the fans that have looked after him so well for so long. They will worship the Rap God even more fervently after digesting this, and the critics/detractors really don’t come into the equation. He’s back on form, clear-minded and has a point to prove – something he achieves with aplomb. He’s never really made perfect albums, or even traditionally “classic” ones (in hip hop parlance). But MMLP2 is a great representation of Marshall Mathers III throughout the ages. It’s fascinating to see where he goes next – hopefully inward, to the heart of Detroit, the city that made him.