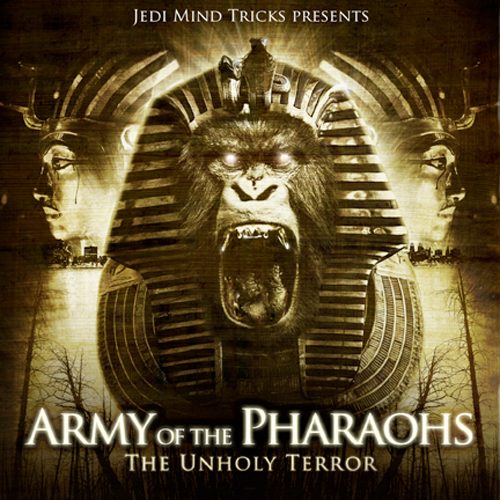 Army of Pharaohs is a group who is ripe for metaphors and comparisons, some more flattering than others. When I first heard the group on “Torture Papers” I came away very impressed and hyped about the lyrical barrage and intensity brought by the collective. Two albums later my views on the group have changed quite drastically. I don’t find myself spinning “Torture Papers” much now, nor do I find much motivation to peep their new albums. The effect has worn off and I’ve become desensitized to the experience that is AOTP. They just don’t hit as hard anymore, they don’t appeal to me anymore, I am not impressed by their concept or execution. They are an army that does one thing and one thing only. The group hits you hard and they hit you over and over again, but there is no strategy or tact in their attacks. “The Unholy Terror” is an attack that is practically identical to their previous two. If you favor brute strength in war then you’ll likely sign up for another tour of duty, otherwise, the AOTP attack will likely do little damage.

If you aren’t familiar with the concept, AOTP brings together a deep collective of rappers down with Vinnie Paz and Apathy and unleashes them over hard hitting beats. The result is lyrical barrage after lyrical barrage of brash, threatening, and sometimes witty battle raps. It’s a formula that is loved by many and viewed indifferently by many more. It’s not that the Army doesn’t do what it does well, it just does it so repetitively that the music loses most of its appeal. Titles are irrelevant in approaching AOTP songs. “Agony Fires,” “Ripped To Shreds,” “Bust â€˜Em In,” “Prisoner,” “Godzilla,” and “Suplex” all sound incredibly violent, painful, and depressing, but ultimately none of them do anything to accurately describe the music or guide it towards a foreseeable goal. “Suplex” has a hook instructing you to arm yourself and get ready for war. The verses from the members don’t follow suit. One can’t help but wonder why the “It’s no holds barred, like the old Hulk Hogan movie” line wasn’t used on “Suplex” instead of “Bust â€˜Em In.” Ultimately, the answer is that the concern here is not with cohesive songs and messages, this album is a display of force and nothing more. Nothing distinguishes “Ripped To Shreds” from “Contra Mantra” except the fact the beats are different and “Ripped To Shreds” contains my favorite line on its hook â€“ “You can kill a Cambodian, but you can’t kill a pharaoh!” To their credit, “Contra Mantra” keeps a loose theme of reminiscing over past times. The few songs where the crew shows focus do a lot to liven things up. “Suicide Girl” maintains a common theme throughout and features a memorable, haunting beat. “Burn You Alive” also veers from the formula with a more structured hook/beat set up and another haunting singer sampled for the hook.

Ultimately the sixteen tracks on this album yielded two I can see myself spinning on the regular â€“ “Burn You Alive” and “Suicide Girl.” Those are the two tracks with the catchiest and most distinct hooks. The rest of the album is literally a blur of adrenaline pumping boom-bap beats and threatening punchlines. It’s not bad, but outside of random lines here and there, little stands out. I’m not knocking the artists involved. Jedi Mind Tricks, Celph Titled, Apathy, and Reef the Lost Cauze have all made music I enjoy and hold in high regard. If they need AOTP to release some of their aggression, so be it. It’s a novel side project, a niche product for fans who want nothing but raw lyricism. The album does its job well, just be warned the job may not be a fit for everyone.