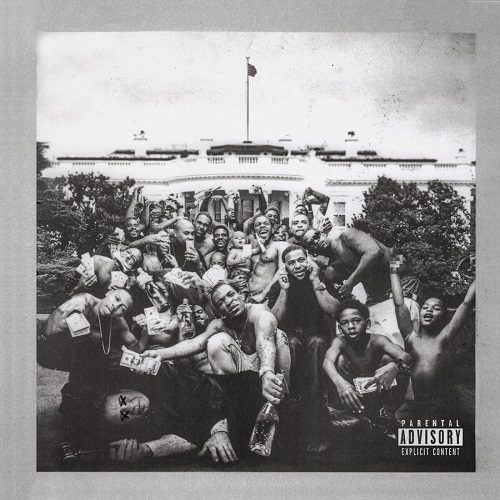 To Pimp a Butterfly

Kendrick Lamar :: To Pimp a Butterfly

I realized something this morning when looking in the mirror, bleary-eyed: I’m not black! After listening to D’Angelo’s “Black Messiah” I somewhat suspected it, but the biggest hypocrite of 2015’s “To Pimp a Butterfly” confirmed it. Other surprises: not from Compton, never met a Blood or a Crip, liked Rae Sremmurd’s “Unlock the Swag” (actually so did Kendrick Lamar)… Rest assured – his new album is full of far more meaningful revelations, and even if I’m not the intended audience, I get it. That’s the beauty of music, and it’s why art has historically trumped politics in changing hearts and minds.

Absorbing “TPAB” is akin to a 79-minute crash course in Black Power, black music, #BlackTwitter – as the album cover hinted, all black everything. Pharrell called this “unapologetically black” and he couldn’t have been more accurate. It’s a Lamar love letter to past and future generations – and like all the best penned messages, it contains a myriad of emotions, truths and stories, all resting on top of Hope. It incorporates countless textures, constantly referencing artists like Lupe Fiasco, Outkast and Eminem, not to mention albums such as Common’s “Like Water For Chocolate” and Nas’ incendiary “Untitled”. And that’s completely ignoring the primary focus of West Coast artists and residents… This is Kendrick taking care of his neighbors.

“TPAB” is such a deep album that neither this nor any other review will ever be able to adequately cover every aspect in detail – the best we can do is select the parts that spoke most clearly to us. Each song is double/triple-layered, whether musically, conceptually or lyrically. The butterfly analogy seems spurious until you reach a thrilling climax, and suddenly it all makes sense – and more so on each repeated spin. This is an album for lovers of the format, one that makes “good kid, m.A.A.d city” feel like a debut. It’s defiantly West Coast, with that OTT Aftermath feel dovetailing brilliantly with Lamar’s subtly sky-high ambitions. The feel is far less “To Kill A Mockingbird” than the title suggests; yet it feels similarly era-spanning. It’s a tough trick to pull off, one that requires serious effort, thought and attention to detail. It seems like the heady cocktail of fame and success (GKMC) mixed with the “Control” backlash and poorly-judged beef (going at Drake) has prompted Lamar to dig deeper, face the insanity and focus.

There’s plenty of symmetry evident: a Malcolm X “The Blacker the Berry” challenging the more Martin Luther King “i”; making a deal with the devil on “For Sale?” versus meeting God (in the form of a homeless man) on “How Much A Dollar Cost” (let alone “For Free?”); the in-your-face opening trio that dares you to enter at your peril (full of answers to questions that don’t matter), contrasted with a conciliatory spoken-word ending that leaves Kendrick searching for closure. There are plenty of ciphers to decipher, drawing you into a world with exclusive language that you’ll likely need to investigate yourself (well, that’s the yams after all).

“To Pimp a Butterfly” is not a vanilla LP: it’s sixteen flavors of chocolate expertly blended together, with each one popping off on your tongue only when it is truly ready to. It also may be a bit too rich for most people – “To Pimp a Butterfly” is particularly heavy to digest, and will likely take weeks or months to comprehend fully. It’s not the universal classic that GKMC turned out to be, rather one that archives the history of black music, West Coast artistry and possibly does all this for a select group of people.

The album flows together so cleverly, with Dr. Dre popping up immediately after closing GKMC with Kendrick, and it playfully segues (without stopping) into each subsequent track, and frequently within songs multiple times. Lamar mentions Snoop Dogg, and (lo and behold) who pops up soon after on “Institutionalized”? The dual-meaning “These Walls” continues the flow, and the whole thing is virtually seamless… “The Blacker the Berry” follows “Complexion” (which, in turn, self-references “Fuck Your Ethnicity”), and on it goes. It’s dense, harking back to Shakespearian levels of complexity at times. The wordplay can range from blunt (“King Kunta”) to pressing the “Insane Button” (e.g. “Hood Politics”). Whether that is conducive to helping this become a mainstay in your “Favorite Albums” list practically becomes immaterial: it’s more a knowledge dump combined with searing emotion and you’ll probably have to be in a receptive mood to revisit it once the hype dies down (GKMC had no such problem, despite both albums relying heavily on mood-creation).

Back in 1994, most successful rappers were bragging about how many foes they’d killed off. What made Nas such a breath of fresh air was how he expressed both his sadness at watching Ill Will (his best friend) get shot; the survivor’s guilt he felt; and, ultimately, the kernels of hope that lay in every situation, that the negative might fuel him onto greater things by bringing the immediacy of life crashing home. There’s much of that on “To Pimp a Butterfly” albeit, in a different way – it’s the sound of someone not entirely comfortable with fame and fortune. Dr. Dre talks about his house (which cost about $15m); and then, you step away from the album and realize that Kendrick celebrated his success by getting baptized and buying his own place for a sensible $500,000. He’s the antithesis of so much in rap right now, and he lives his life in a way that reflects this. However, at no point do you get the feeling that HE’S judging other rappers, or their music, as that flies in the face of his ultimate goal: bringing his community together, forever.

While “TPAB” may not be perfect, he certainly achieves the vast majority of his goals. Perhaps a more logical progression would have possessed less of a quantum leap from GKMC to this point, but he’s a true artist with a lot to say. Sometimes an album doesn’t need “beats that other MC’s would kill for” or hit singles. He even takes “i” and redoes it as a live club gig joint, complete with a fight he innovatively breaks up. This is the sound of a caterpillar trying to escape that self-inflicted cocoon, of a man dealing with depression trying to make sense of the world by talking to fallen heroes, by interacting with us (his core fans) and by trying to do it all on his own terms, no matter the consequences. There won’t be another album in 2015 with so much of the artist invested in it: mind, body and soul.