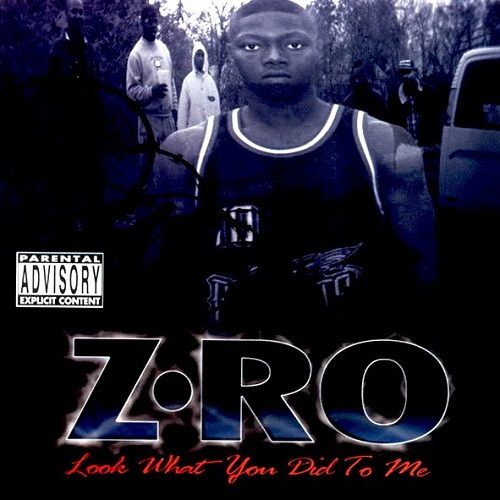 When I think of Texas hip hop, I tend to think of two types of artists. The first is the Geto Boys/UGK/E.S.G./Rap-A-Lot sort – rappers and producers raised on funk and soul tunes who came to prominence in the early-90s using distinct elements of those genres in their music. The second is the Lil’ Flip/Slim Thug/Swisha House/”tippin’ on fo’-fo’s” variety – MCs who came of age during the Clinton administration listening to DJ Screw tapes. Although the latter could certainly be cited as a mere chronological extension of the former, Houston’s Z-Ro seems to have the best of both worlds, fitting seamlessly into both categories. Often likened to Scarface for his haunting narratives, inimitable soul, and glimpses of a conscience beneath his stone-cold demeanor, he is himself a disciple of the late DJ Screw and puts on for the extended Screwed Up Click as loudly and proudly as any. Z-Ro has a massive discography, and the lack of literature on it can make it almost impossible to distinguish between albums, mixtapes, compilations, and unauthorized releases – picking up a random Z-Ro record can be a perplexing experience because you never know what you’re going to get. He regularly bounces between labels and does not approve of everything that comes out with his name on it, and with releases coming as frequently as every few months with varying levels of distribution, budget, and promotion, it makes for a giant volume of music. Then again, perhaps it’s not unlike his city’s rich mixtape tradition – he has a ton of music and releases it accordingly.

Z-Ro was 21 when his debut “Look What You Did to Me” arrived in 1998, but even still he was no rookie – a widely circulated demo tape called “The Crooked Mind” is purported to be from 1995. That said, it’s quite surprising how fully formed he is here, and it’s immediately clear what a singular talent he is. He flows at breakneck speed with the technical precision of a seasoned vet, and his austere, inspired lyrics suggest the experience of a weathered, world-weary survivor twice his age. He is also a startlingly effective singer, using his deep baritone to enhance his mournful tales, making him, as RapReviews’ Pedro “DJ Complejo” Hernandez wrote, “a modern day bluesman and folk-tale purveyor.” He possesses a truly unique combination of street readiness, musical sensibility, and strong songwriting, but what makes him such an unusually compelling artist is simply the sheer emotive quality of his music. One need not hustle, sell crack, or carry firearms to appreciate Z-Ro; he evokes all the pain, power, and emotion of the human struggle, and rarely in a more raw or hungry manner than on his debut.

Z-Ro’s performance on “Look What You Did to Me” initially drew many comparisons to 2Pac. At times there are uncanny similarities in their vocal deliveries, especially when he drops a line or reference reminiscent of Pac – for instance, “Lord Tell Me Why” lifts its hook from the same Five Stairsteps sample that “Keep Ya Head Up” did, and when he rhymes “When they kill me don’t shed a tear / Remember, I’m not happy here” on “City of Killers,” you’ll swear it was an outtake of “I Ain’t Mad at Cha.” But most striking, Z-Ro shares with the late Shakur an unlikely charisma despite, or perhaps even because of, his terribly bleak outlook. Even the album’s title might breed a comparison – just as 2Pac once noted, “I was given this world, I didn’t make it,” Z-Ro’s brooding character is a product of his grim environment, and the result is his chillingly somber “reality rap” – tales so sobering that often he can’t help but look to God for help, as on the opener “Guerilla Till I Die” in a triple-time verse so fast that it would twist Bone Thugs-N-Harmony’s tongues:

“Could it be I’m too good for hell?
Heaven don’t want me, because I keep slippin’
Even though I do drugs, I still preach to
Motherfuckers about how to be Christians
I got a problem I suppose, but I know
I’m go’n solve it with a four-oh, ten-six of fry
And about twenty-five Tylenol fo’
But they tell me to hold my head up and finish my tape
Because its go’n jam, do they really
respect my music, or hang
Around Z-Ro, just to meet Bam, I really don’t know
All I can say, that I don’t trust nobody on this earth
Been that way ever since my birth”

The title track is equally gloomy, with Z-Ro referring to himself as a “monster”:

“They said it was gonna get greater later
But now I can’t help to think that it ain’t
But a nigga was fed up with this life, thinking about running over to play
Cross my wrist, every last drop till I faint
Taken out there, pulling Smith for the things that I never did
Coming up as a young kid
Trying to get rid of all the animosity towards me
That was shown by the other kids, what do I do
And why do everybody wanna see a nigga fall
Mama and daddy can’t be found
So when I’m stressed out, who the fuck can I call
All alone in my zone, with no friends
So I chose to make friends with drugs
‘Cause everyday, everybody around me
Tryin’ to clown me, so I got afraid and I got buzzed
Out of frustration came aggravation
Depression coming down in my mind
Kept a nigga confused and straight cryin’
Dyin’, from sweet sticks in line
Throwed off in my mind
Tryin’ to wonder why do Jesus let this keep happening
To a nigga that’s steady bein’ on his knees
And I’m beggin’ you please, have mercy on me
Find a nigga a better way, right about now I’m to the point
Somebody better take this infrared away
‘Cause if it go too long, and I got a piece of chrome
And I want to you to come and look and see
The monster that you’ve created, look at what you did to me”

“Look What You Did to Me” sounds, in many respects, like an underground release, lacking the smooth polish of Z-Ro’s more recent work at Rap-A-Lot with Mike Dean. That’s not to say in the slightest that it suffers musically. What Z-Ro and the unheralded Rakesh, the same duo behind the boards on Guerilla Maab’s 1999 debut “Rise,” may lack in equipment, they more than make up for in musicality. The dark, heavy beats, rough synthesizers, and eerie, sparse pianos are so perfectly aligned with Z-Ro’s lyrics that at times it can make for a chilling experience, and he sings his own hooks brilliantly. The gloomy bass, strings, and creepy bells vibe perfectly with Z-Ro and T.A.Z.’s ragga-inflected deliveries on “Ghetto Crisis,” and the thumping, menacing funk of “R U Down” is excellent.

Guests are limited to the Screwed Up Click, including onetime Guerilla Maab member T.A.Z., Z-Ro’s cousin in blood and rhyme Trae, DJ Screw’s brother Al-D, Chris Ward, Bam, and the Fakkulty. The standout is the scathing Chris Ward duet “Dedicated 2 U,” a vicious diss track:

“Nigga, you ain’t my partna, but you never been
Just wanted to get in the club free, you little low yellow bitch
You ain’t never been real, but it’s evident
You be looking to get your chest blown (boo-ya)
Or are you used to walkin’ the hallways
Of your home with a vest on
Talkin’ you come real with the black steel
But you ain’t never seen no glock
That’s why Grady checked your ass up out your hat
‘Cause you never lived on our block
But niggas be going off at the mouth
And I’m so sick of these hoes acting sheist
Nigga really finna lose more than your teeth
Fuck around and be looking for your life
‘Cause I’m the nigga that showed you love
It’s best you keep your distance from me
Even though we once was throwing up the same sign
I’ll put your bitch ass to sleep, remember
I started the click you claim
And you wanted to trip when I left
Tryin’ to catch me slippin’
You niggas put one scar on my chest
And a nigga would try to erase me, and that’s a fact
But if I gotta go, really I’ma be
Goddamned if my trigga finger isn’t pulling back
Even if they fuck around and murder me for the things I spoke on
I’m gonna be in the depths of hell, hollerin’ out ‘Fuck you’ as I smoke on”

The aforementioned “Lord Tell Me Why” is a highlight as well, standing as a ray of hope with a bright beat despite Z-Ro’s accounts of struggle. He weaves a gripping narrative on “Tall Tale of a G,” sends a heartfelt verse toward an incarcerated friend on “And 2 My Gs,” and assumes his alter ego The Crooked on the rugged closer “Z-Ro the Crooked.”

In an industry where a debut’s success can make or break a rap career, Z-Ro had to settle for local acclaim and used “Look What You Did to Me” as a foundation for an increasingly fruitful recording career. I like to fancy that someday it might be celebrated as Bruce Springsteen and Binary Star’s earliest records are – independent regional favorites by young, struggling artists so blatantly talented that, once revisited after their commercial breakthroughs, the world can’t believe they missed them. Despite huge respect, critical acclaim, and unconditional love in H-Town, it took years for Z-Ro to even splash the national radar, and for such a talented, appealing, passionate, emotional, and prolific artist – especially one so universally lauded – it can be downright upsetting that he remains as underrated at he is. Introducing a superb rapper, captivating vocalist, and deft producer, “Look What You Did to Me” is that rarest of debuts that showcases a fully developed artist, one ready to shine even if the world wasn’t prepared to return the favor.