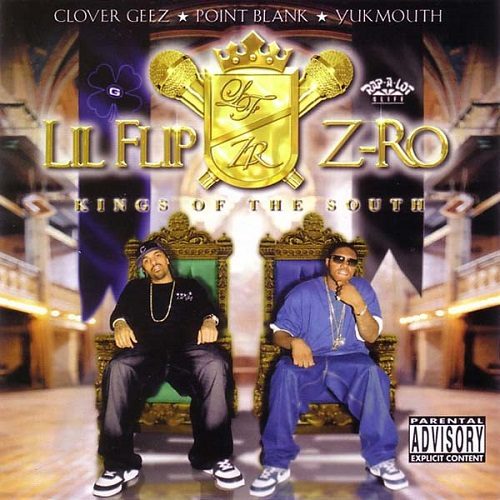 On paper it’s a dream team of Houston hip-hop. Individually Lil’ Flip and Z-Ro have released some of the most interesting and important albums of the Third Coast rap scene, such as Flip’s “U Gotta Feel Me” and Z-Ro’s “Let the Truth Be Told.” Both have achieved some measure of crossover success as a result of the South’s rising popularity and mainstream exposure, but certainly could have a lot to gain by uniting to work together. As such one could hardly be shocked that when Joseph McVey and Wesley Weston came together to record an album they would call it “Kings of the South.” In fact Flip in particular seems to be making a move to consolidate their position as kingpins by taking out rivals such as Paul Wall on the track “Art of War”:

“Me and Z-Ro the Kings, you better do your math
And the shit I’m spittin bitch, I ain’t use a pad
I might bruise you bad, just to move yo’ ass
Come down to Texas and I bet the crowd, boo yo’ ass
Atlantic got you gassed nigga you ain’t hotter than Twista
Jail don’t make you a gangsta and neither do a pistol
Hood beef is hood beef, we ‘sposed to keep it in the hood
This nigga ain’t from Houston Texas why y’all make him look good
I can tell he ain’t real cause when the cameras come on
He gotta put his grill in and pad his makeup on”

It’s not all about the drama though, the war to consolidate their place in the throne by taking out adversaries they perceive as lesser. The “Kings of the South” also enjoy cruising around H-Town in “Burbans and Lacs,” and over this smooth melody Z-Ro takes the listener away from the drama of the day and shows how he likes to ride when it’s time to chill and enjoy life:

“Sometime I flip in the cream Caddy, sometime I flip in the Fleetwood
You know the one with the platinum skin and the chrome spinnin shoes that fit her feet good
Might slide in my Dodge Intrepid, or the limousine tint over 83’s and fresh meat
Guaranteed to squeeze when enemies test me, I’ma empty the clip and reload again
Ain’t got no gal ain’t got no friends, only thing I give a damn about is my ends
I wish Screw-Zoo was alive, so I could watch him make another dub again
I’m mad at the world fuck love again, cause my so called potnahs think I’m cappin
Bitch I’ve earned the right to live the good life, y’all know how long I’ve been rappin”

True dat Joseph, true dat. Unfortunately even though a powerhouse collaboration like “Kings of the South” ought to have been one of the biggest albums to come out in 2005, a few things are holding this album back. One is really beyond their control – the inability to achieve wider distribution. Flip didn’t release this through Sony/Columbia, and Z-Ro didn’t put this out through Rap-A-Lot – both rappers had to go around their major label deals to put this out independently through Clover G’z/Payday. That’s a relatively minor issue if the album is banging, since good music will find it’s way to the public if there’s a demand and major labels have shown a willingness to re-issue underground Southern albums and give them wider exposure. The larger issue is the album itself, which has a few great songs and a lot more that are just average. Oddly a few of this album’s best songs are completely solo tracks that don’t feature the other artist billed, such as Z-Ro’s slamming but short “Uncut”:

“On the edge – sit on the edge of the bed with a infrared in my paw
It’s time to pay back everybody I owe, if you scared call the law
Cause I ain’t gon’ never stop comin after yo’ coward ass
Roll up on you at the intersection, bitch I’m ’bout to blast (’bout to blast)
All you rappers dissin Z-Ro in your song
Bitch I’ma for real life headbussa, I’m comin to see you fuck a song”

It’s hard to explain then why both Lil’ Flip and Z-Ro both seem to be going through the motions on the poorly produced title track. The beat is overly simplistic and totally lacking in thump, and both rappers try to use a gimmick of dropping out the music to make punchlines harder, which makes their flow and the track itself seem even more awkward than it already is. Did they really think terrible lyrics like these would work? In fact Flip’s first verse is a bit nauseating:

Flip: “Look me and my niggaz, we fifty deep with them triggers
I’m a school boy yeah right, I run with them killers
Afilliated with pimps, I know too many cats
I’ve been rapping eight years, I got too many plaques
Now when I run in your crib…
And take your son out the crib…
And put the gun to his bib…
Now it’s one in his ribs”

Z-Ro: “I stay in and out of the jail house, I can afford to bail out
You can call me the postman, all I do is follow my mail route
I got a stanky ass attitude, excuse me nigga you have to move
See these big-ass niggaz I’m walkin with, there’s some behind you too
Don’t want us to trip…
You don’t wanna see this extended clip…
Be on the lookout for Z-Ro and Lil’ Flip…
This is history in the makin ya bitch!”

Really Flip, you’re the freestyle king and the underground legend and all that, but I don’t think you acquired the status by rapping about murdering infants. Sometimes you just have to call some shit stupid when you hear it, and that’s motherfucking STUPID. It’s far more insulting that the song is boring though – it does nothing to impress musically or make fans of either MC happy. The album’s best offerings are the ones that seem to rip beats off from Lil’ Jon wholesale such as the slow bounce attack of “Grown Man,” the heavy keys and slightly humorous similes of “Remember Me,” and the aptly titled “Get it Crunk” featuring Yukmouth.

As much as I wanted to enjoy “Kings of the South” these Screwed Up Click compatriots from different labels both seemed to be relying on the other contributor to step their game up. As a result neither really come with their best flows or lyrics, and seem to coast along thinking they’ll either be saved by their partner’s verses or some great beats. Neither happens. This album is not so terrible that fans of either individually would want to skip it altogether, but if they intended to create a Screwed Up supergroup with “Kings of the South” one can only conclude from listening to it that they failed entirely.