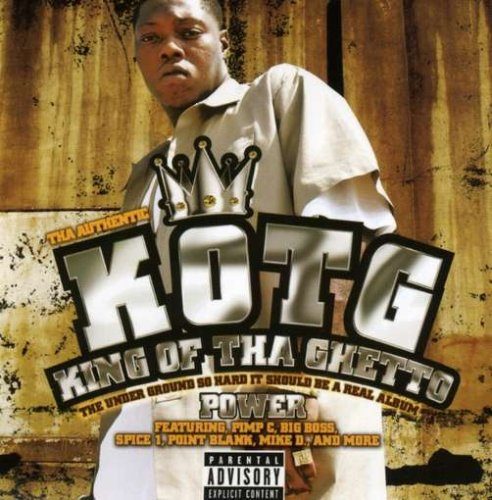 “All songs wrote and produced by Z-Ro for King of Tha Ghetto Entertainment.” On the one hand I’m thrilled by reading this notice on the one-piece insert for Z-Ro’s new album “Power.” As a reviewer an entirely self-produced album is a blessing because you don’t have to second guess yourself and check the liner notes when a beat that sounds like Timbaland is actually The Neptunes or vice versa. On the other hand something feels awfully janky when you take the shrinkwrap off a CD you just shelled out $15 for and find a one-piece inside that doesn’t have any notes about mixing and recording let alone what samples are used. Then again this is Rap-A-Lot Records we’re talking about, known for some of the skinniest liner note inserts in hip-hop history. Some of them have been so skimpy and wimpy that you could have made a better insert with a dot matrix Commodore printer, having your nephew fill in the color with magic markers or crayons. Unless Z-Ro jumps ship and suddenly winds up on Def Jam or Interscope, we should expect releases like this to be the rule and not the exception.

That’s the funny thing about Z-Ro – at this point he’s clearly a bigger star than Rap-A-Lot should be able to afford. No offense to the legendary label but the budget they ball on wouldn’t even be able to pay Jay-Z’s per diem. Z-Ro’s been dropping Southern classics since the late 1990’s and even though RapReviews was late to get on the bandwagon we’ve covered three gems since then: “The Life of Joseph W. McVey,” “Let the Truth be Told” and “I’m Still Livin.” Each of McVey’s albums since 1998 has taken listeners through the “six feet even, two hundred and twenty-eight pounds” rapper’s struggles in Houston, Texas. Z-Ro knows about the struggle all too well, given his constant journies from the recording studio to the prison yard. In fact as of the release of “Power” he’s currently incarcerated again, not scheduled to get out until July of this year. It’s more than a little odd when you think about it given Z-Ro’s raps are very personal narratives which tend to observe rather than glorify the criminal activities of his environment. With Scarface becoming increasingly more invisible to the hip-hop scene, only occasionally popping up for a mediocre compilation, Joseph Wayne McVey seems to have ably stepped into the shoes Mr. Mister Brad used to fill. Sadly the key difference between the two is that Scarface wasn’t spending all his free time behind bars, even though by his own account he was constantly harassed by the DEA and FBI. Z-Ro sums up these problems well on “My Life”:

“Who is my friend, who is my foe, I just can’t tell no mo’
Cause seem like everywhere I go, somebody got a problem with ‘Ro
It might be somebody from the past or somebody I don’t know
Bottom line I ain’t never fucked with nobody, why y’all fuckin with me fo’
It’s a trip to see how all these people scream my name
Cause I can remember a whole lot of ’em that said I’d never make it in the rap game
Look at me now though, I got cars and cash
And since I’m able to say fuck regular weed I get hydro by the bag
I’m the same nigga, white tennis shoes, blue jeans and a white t-shirt
24-7 all day and night around the clock that’s how we work
I could give a fuck about these niggaz wantin beef
They’ve been muted by my paperchase, interrupt me you might come up deceased
Bitch I’m a product of the streets, plus I’m an animal
that’s too raw and untamed and J. Prince got me off the leash”

Z-Ro has all the tools for success – a deep and distinctive voice, the ability to flip his breath control with ease and go fast or slow as needed, and the intelligence to construct raps that often and sometimes by necessity seem deattached from his own personal life. Z-Ro’s lyrics become the camera and his mouth becomes the cinema, delivering the words onto the screen in your mind and showing you both tragedy and triumph. When things are going badly and Z-Ro is stressing about having to turn himself in, he eases his mind with a hit from the “Bud Sack.” When things are going well and he’s happy with his success, he hooks with Big Shasta and Lil’ Flip to tell us what a “Lovely Day” it is in the hood. McVey’s life swings between these opposites taking us on an emotional roller coaster ride in the process. He’s searching desperately for balance, something poignantly articulated on “Struggling to Change”:

“Keepin crack out my pocket, a pistol but I don’t cock it
All I want to do is get paper the legal way
I used to be sellin drugs, runnin up and down the boulevard
Better respect whatever the desert eagle say, 5-2
2-4-Z-Ro, for the mad super ego
Couldn’t nobody tell a nigga nothin about life
‘Til I started trippin too hard, smokin them sherms in the dark
And was a witness to my people bein shot twice
I had to get my mind right, stop grippin that iron tight
Everybody hand out to get a nigga for bread
But I promise it wasn’t nothin when niggaz be gum bumpin
My pistol’ll come dumpin, nothin but infrared
[…]
Dealin with haters and perpetrators tryin to fade us
But I’m cookin up somethin major, wait ’til they get a load of me”

While the lyricism from Z-Ro remains as strong as on previous releases, the album does at times feel as though he was rushed to self-produce and finish it before doing his next prison bid, particularly musically. “Nigga Like Me” has all the right elements of bass and drums and Z-Ro’s charismatic singing on the hook but still feels uninteresting, not helped at all by the dominance of secondary rappers Duke and Point Blank on the track. “Murder Ra” has the opposite problem – the piano track is completely monotonous but the guest apperances by Pimp C and Spice 1 pull it up out of mediocrity into something nice. Spice also provides a nice cameo on “Staying Alive,” proving the Bay Area legend still has something to offer after all these years in the rap game. The biggest drawback to Z-Ro’s “Power” is that he really needed some help with the production on this one. None of the tracks are unprofessional or poorly recorded, but many of them just fail to push him to the next level of stardom he’s clearly ready for. Here’s a suggestion for Z-Ro once he gets out this time – if you’re going to produce charge up-and-coming rappers for it and make yourself some legal bread, because you’ll make better for them than they can for themselves. Flip that money and get a lawyer, get a better record deal or start your own label, and build off the fame you got from appearing on Bun B’s “Get Throwed” and finally become like Scarface not just in ability but recognizability. It’s your time, you just have to decide how much you want it and how hard you’ll fight to claim it.