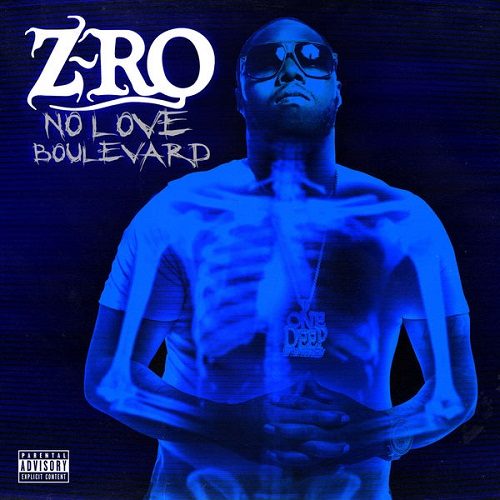 “I’m the father of these rappin’ ‘n sangin’ cats”

“I go hard, if not harder than all these other famous acts”

And he might have a point. Z-Ro is a folk hero who sings his own legend. Mainstream fame may have evaded him, but he’s as dependable to his fans as they are to him. The first of two 2017 releases, “No Love Boulevard,” successfully showcases some of the artist’s enduring strengths and current qualities. Ditching the experimental impulses of the younger generation, he has the ol’ reliables at his disposition – melodies, harmonies, range, rhythm, and he’s frequently escorted by tracks that function the same way.

From the start, “No Love Boulevard” banks on the artist’s strong points. “Lost My Mind” discusses his typical concerns with a refreshed and sharpened vision, like the comeback kid who realizes his old virtues still take him far. Even though he likes to divide the world into good and bad, he has a grip on the complexity of emotions, which shouldn’t be taken for granted for someone who’s still essentially rooted in rap. A model of a Z-Ro song, “Lost My Mind” is up there with his best efforts. When searching for peace of mind, he sounds like he just about found it:

“Thorazine, Wellbutrin and Prozac
That’s the reason Z-Ro act the way Z-Ro act
Say doc, this dose is too strong, so can you change mine?
Cause I be frownin’, I be laughin’ at the same time!
Maybe I’m crazy (Maybe I’m crazy)
I be talkin’ to myself on the daily
(What you say, though?)
Like: What the fuck we ’bout to do? – Get high, Ro
Nah, maybe later – Nah, nigga, right now, Ro!
Mean case of road rage in a nice ride
Rollin’ with my bestie – ain’t nobody on my right side
When I die my daughters gon’ split my cash
And tell all of my baby mamas they can kiss my ass”

“From the Other Side” shows why Z-Ro is southern royalty in a line with OutKast and UGK. Slowly developing the theme of paying attention to someone who may know better than yourself, he quite naturally brings the argument full circle, at the end urging himself to heed his own advice.

Musically, Z-Ro has reached a point where he would be able to sneak into an established market, most likely something like urban adult contemporary. Vocally, he seldomly goes just through the motions anymore, he puts emotion into every line, elevating rap bars to genuine vocal parts. Trained by Tupac and Bone Thugs (and surely a lifelong consumption of R&B), he forges an emotional bond with the listener even when conveying feelings that are not typically recited in this manner like anger, menace, wit or despair. Granted, classic soul-stirring moments like the “I see the suffering in your eyes” part from “From the Other Side” are an exception. Instead Z-Ro is the rare artist who will put his heart and soul into lines like “Solid”‘s “Takin’ haters out like it’s Monday morning and they are garbage / If I gotta come get ya I’ma just come get ya, won’t be no warning.” Occasionally he snuggles up even more closely to R&B just because he can. It’s hard to imagine any professional giving “They Don’t Understand” the thumbs down as far as the craft involved goes, that’s how much Z-Ro and his crew master the finer points of the genre.

And yet he keeps his distance, which is not only measured by the strong language that he uses – or exemplified by a vengeful offering like “Lit Up” or the sexual metaphor “Kiwi” (a Z-Ro staple). What makes a song like “Belong to the Streets” so fascinating is that it’s structured like a standard ballad about the male conflict between domestication and the call of the wild, but it’s also a sensible study in keeping home and office separate. Does Z-Ro perpetuate dated gender roles? Maybe. Does he deal in grown folk business? Definitely. Z-Ro is effectively a crossover artist in various ways. A major one would be his ability to maintain a rapper’s attitude during the hooks and a crooner’s composure during the raps. But through all the convergency, in terms of content he’s always keen to put some distance between himself and virtually EVERYBODY ELSE. That’s part of the legend.

“No Love Boulevard” is another multifarious collection of Z-Ro songs (with a few pedestrian efforts scattered in between) that confirm his unique standing. He drops Lil Wayne-worthy interjections over fluffy last-decade R&B pop in “Bye Bye,” lives it up to the ‘Narcos’ theme song in “We Are,” takes would-be competition to the task (with a simultaneous nod to Jeezy) to the rhythmic barrage of “Brang a Stacc” and fights music industry temptations on “Devil in Me.” The Z-Ro legend lives on, and the sheer volume and quality of his output ensure that it will continue when the music stops (a scenario that was briefly suggested during the release’s promo phase). For the time being, the album’s momentary goodbye is called “He’s Not Done” (coincidentally or not the track with most modern production), and it deals in the same instinctive excellence as the stellar opening track:

“They say Ro ain’t the best, he is just depressed
He ain’t got it all, he is just a mess
He don’t give a fuck what you say about him long as Empire still cut the check
Like they blindfolded, no rubber on, they don’t really know who they f–kin’ with
I am Michael Jordan, I retire, come back and retire again for the f–k of it”